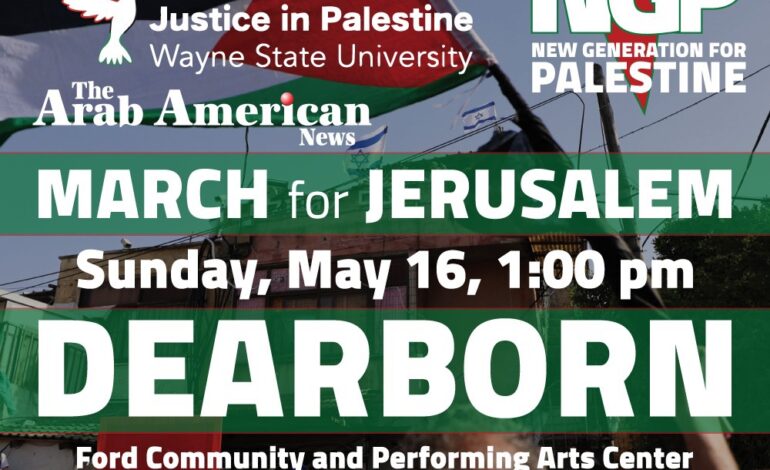 On Sunday, March 16 at 1 p.m., we will be gathering outdoors at the Ford Community and Performing Arts Center in Dearborn for an important event, “the March for Jerusalem.” This event will be sponsored by New Generation for Palestine, The Arab American News, Students for Justice at Wayne State University and many other organizations.

As a community, we must come out in our largest numbers ever in this time. We have all seen the images coming out of Jerusalem, Gaza and the rest of Palestine. Israelis are lynching Palestinians. Israel is slaughtering children. Palestinians are being displaced. It is heart-wrenching to everyone watching, not just Arab Americans.

But we Arab Americans must lead the way. Palestine has always been the central issue in the hearts and minds of the Arab American community. We must stand firmly with Palestine and show our strength in our own streets. Let the world take notice.

What’s happening in Palestine is the latest episode in a 73-year campaign of ethnic cleansing and genocide. Israel’s main goal has always been to rid Palestine of Arabs. It is our duty to show that we will not stand for those who turn a blind eye to it.

Luckily, in Metro Detroit, we have two representatives who have stood tall in the last two weeks. U.S. Rep. Debbie Dingell, who represents Dearborn, spoke out against the ethnic cleansing of Jerusalem: “The violence and forced displacement of Palestinians in #SheikhJarrah is deeply disturbing and morally wrong. We must ensure any U.S. involvement in the region continues efforts toward lasting peace – including the protection of human rights.”

Of course, Palestinian American U.S. Rep. Rashida Tlaib has been continuously outspoken against Israeli policies, more than just recently. “The Nakba never ended. From Jaffa in 1948 to Sheikh Jarrah, Jerusalem today, we must recognize the forced displacement and violent dispossession faced by Palestinians for over 70 years,” she recently wrote. Just last night, she delivered a moving speech on the House floors, where she declared, “We must condition aid to Israel on compliance with international human rights & ending apartheid.”

Sadly, other elected officials have failed miserably in this time. Senator Gary Peters stood unequivocally with Israel, making no mention of Palestinian suffering or displacement, and only reiterating the Zionist tropes of Israel’s “right of self-defense.”

How do we respond? By showing our numbers on Sunday afternoon. We must bring our keffiyehs, our flags and, most importantly, our voices. Palestine needs us. Let’s not disappoint her.