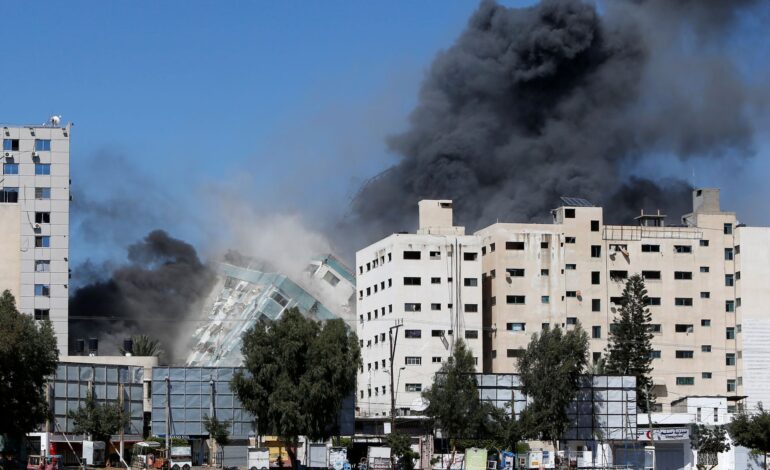 GAZA — Israel pounded Gaza, destroying a tower block that housed the AP and Al Jazeera news organizations, and which it said had militant assets, with no sign of an end to almost a week of bombardment from Israel that has killed more than 130 Palestinians in Gaza.

The death toll is rising from the worst escalation since 2014 and diplomacy has so far failed to quell it.

Israel’s military brought down a 12-story block in Gaza City that housed the U.S. Associated Press and Qatar-based Al Jazeera media operations, as well as other offices and apartments, leaving a huge heap of broken masonry.

Israel gave advance warning of the strike so it could be evacuated and said later the building contained military assets of Hamas, the group in control in Gaza.

The U.S. told Israel, “that ensuring the safety and security of journalists and independent media is a paramount responsibility,” White House Press Secretary Jen Psaki said.

The AP and Al Jazeera strongly condemned the attack.

Palestinians say at least 139 people, including 39 children, have been killed in Gaza since the conflict erupted on Monday.

Palestinians, who each year on May 15 mark “Nakba” or Catastrophe Day, their displacement in the 1948-49 war that accompanied the creation of the modern state of Israel, were attacked by Israeli police across the occupied West Bank on Saturday. Medics reported 29 Palestinians injured, 17 of them by live fire. Medics previously reported 11 people killed on Friday in the West Bank.

Living conditions for Gaza’s 2 million people are worsening, with households receiving just four hours a day of power instead of the usual 12, Palestinian officials said.