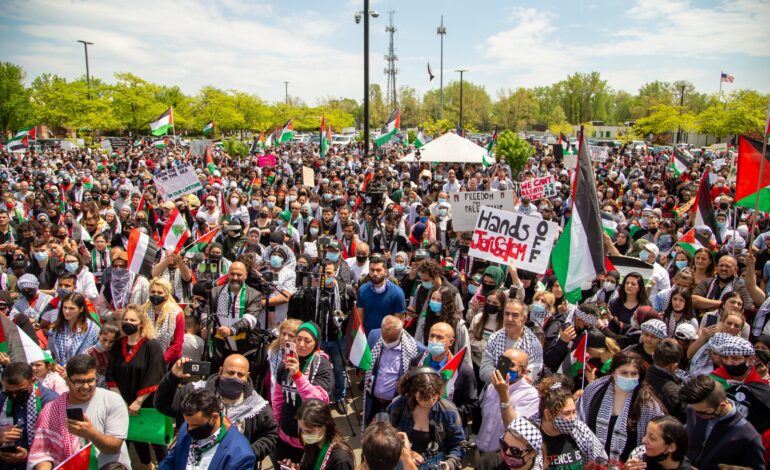 DEARBORN — More than 10,000 local residents and activists gathered last weekend in protest of the latest Israeli ethnic cleansing campaigns in occupied territories of Palestine over the weekend.

The Israeli government has sanctioned tactics of attacks aimed at the dispossession of residents from their homes, recently targeting the densely populated neighborhood of Sheikh Jarrah. It has also shored up right-wing nationalist segments of Israeli society, cracked down on protests over the expropriation of Palestinians from their homes and conducted multiple assaults on the holy Al-Aqsa mosque during Ramadan. This occurred in the lead-up to Hamas shooting its first retaliatory rockets, in response to which Israel has bombarded Palestinian families into a second week on Monday, killing scores and displacing tens of thousands.

The Arab American News has continued to report on Israel’s ongoing crackdown on resistance efforts and its current bombardment of Gaza that has left more than 200 Palestinians dead, including some 60 children, and 1,000 more wounded. The death toll in Israel was at 10 on Monday, including a child and a soldier. The Israeli military says it has shot down more than 90 percent of the rockets aimed at it with its well-funded Iron Dome project.

In a recent report, Human Rights Watch “accused Israel of pursuing policies of apartheid and persecution against Palestinians — and against its own Arab minority — that amounts to crimes against humanity.”

International protests have erupted in the midst of the destruction in Gaza, attracting tens of thousands of people. Protesters came together in nationwide rallies in U.S. cities, including Chicago, Buffalo, New York City, St. Louis, San Francisco, Portland and Los Angeles.

In conjunction, Dearborn residents gathered in a massive turnout of more than 10,000 people for two protests and marches in a show of Palestinian solidarity and bringing awareness to the relentless Israeli genocidal atrocities in occupied Palestine over the weekend.

“Today is the 73rd anniversary of the Nakba, which is Arabic for catastrophe,” said Sahar Faraj, one of the main organizers for the Palestinian Youth Movement-Detroit. She spoke to a diverse crowd of more than 1,000 Dearborn and Detroit activists and concerned residents gathered behind the Arab American National Museum.

“If you are not paying attention to our people crossing borders, breaking down their fences and (you) have been compartmentalizing us, then you are not seeing that right now (we) are resisting the destruction of my people.”

Several Arab and non-Arab local activist organizations joined the PYM in rousing the crowd prior to the march in a collaborative show of cross-movement support and solidarity.

I’ve always supported Sahar (Faraj) and PYM. We are all in this together as one. I was born in South Africa, so I know what apartheid is like — Jennifer Nichols, Detroit Will Breathe organizer

Former Black Panther member and Detroit activist Baba Blair Anderson addressed the protesters by recalling the murder of Black Panther Party leader Fred Hampton he witnessed in the 1969 Chicago police shooting and raid. Anderson drew connections to the struggle between the politically repressed cause for Palestinian liberation and the historic Black American struggle against systemic violence.

“Palestinian power to Palestinian people,” Anderson said. “Let us all recognize the history of this day.”

As they began the march eastbound on Michigan Avenue, the energized crowd repeatedly and enthusiastically chanted words that spoke of resistance and hope. One chant being, “From the river to the sea, Palestine will be free.”

Detroit Will Breathe organizer Jennifer Nichols helped organize on the ground in solidarity, guiding people to safety in the front of the marching line.

“I’ve always supported Sahar (Faraj) and PYM,” she said. “We are all in this together as one. I was born in South Africa, so I know what apartheid is like.”

Max Barnatt, a local Jewish resident, came out to the protest in support.

“I have family in Israel, in the U.S. and Lebanon. We have lived our lives by replicating the rules of colonialism for too long for no reason. It can’t be something that continues if there isn’t a future there.”

The protesters marched down Michigan Avenue, turning left into the residential streets, before pouring into Ford Road and holding a brief sit-in near the intersection of Ford Road and Chase Road.

“I’m really pleased,” said Diana Abouali, director of the Arab American National Museum. “I’m emboldened by the response. I know the question of Palestine is a universal issue.

“This is a sort of turning point,” Abouali said, when asked how she thinks the demonstrations of today will go down in Arab American history. “I’ve never seen this kind of demonstration for Palestine since the early 90s, during the first Intifada. The fact that so many people here are not Arab, I find that really inspiring and the tides are turning.”

I have family in Israel, in the U.S., and Lebanon. We have lived our lives by replicating the rules of colonialism for too long for no reason. It can’t be something that continues if there isn’t a future there — Max Barnatt, Jewish resident

The group rallied and continued down Greenfield Road toward the Dearborn Police Station, where they peacefully occupied the front lawn and steps of the building in a animated rally and a host of speakers, including Alexandria from Accountability for Dearborn. The five-hour rally and six-mile-long march concluded in the trek back to the Arab American National Museum for a grounding circle talk led by the organizers.

Sunday, May 16: Massive second rally for Palestine turns out of 10,000 protesters in Dearborn

Let’s be clear, this didn’t just happen the last few weeks in Jerusalem. This has been going on since 1948. They use words on TV like “eviction” and “clashes.” That’s not true. It’s an occupation. It’s ethnic cleansing — Amer Zahr, Palestinian American and NGP president

NGP President Amer Zahr spoke from a microphone on a stage, addressing the massive crowd.

“We are here today in Dearborn to show that our community is strong and that our community is going to speak up for Palestinian rights,” he said. “let’s be clear, this didn’t just happen the last few weeks in Jerusalem. This has been going on since 1948. They use words on TV like ‘eviction’ and ‘clashes.’ That’s not true. It’s an occupation. It’s ethnic cleansing.”

Zahr emphasized the need for accountability and support from government officials, including local representatives in public office.

U.S. Rep. Rashida Tlaib (D-Detroit) joined a line up of local speakers, including The Arab American News Publisher Osama Siblani, to bring awareness to Palestine and the apartheid happening that she has heard crudely compared by the opposition to “mowing the lawn.”

“It’s this movement that will shift Congress,” Tlaib said. “Because what they did recently is trying to clothe over Gaza to try to take away any source of media outlets that were showing the suffering and the pain, which you were trying to connect your pain to the pain of others. And that’s the solidarity and intersectional work needs to happen. We are seeds. I’m telling you, the squad in Congress is getting bigger. We’re not going anywhere.”

We are protesting and that is very powerful, but we need to take further steps and reach out to our congressional representation and start taking more action on what’s going on in Palestine. We are aiding 3.8 billion dollars, just from our own tax dollars to Israel to support what they are doing to Falasteenis — Sherin Shkoukani, president of Students for Justice in Palestine Wayne State University chapter

Siblani offered strong support for awareness building around the persistent Israeli violence against Palestinians. He addressed President Biden’s current stance in support for Israel and the lack of follow through of campaign promises to the Arab American community.

“We have heard from him (Biden); Tuesday he will hear from us.”

An immense crowd marched eastbound on Michigan Avenue toward the City Hall Artspace Lofts (formerly Dearborn City Hall) and back to the Civic Center. Residents and businesses owners came out, some offering water bottles and showing support as the protesters walked through the main street, chanting loudly over speakerphones and darbuka (goblet) drums.

Above: A rally for Palestine at Michigan Avenue in Dearborn, Sunday, May 16. Photos: Imad Mohamad/The Arab American News

“What is going on in Palestine brings me so much sadness and today’s demonstrations were amazing,” said Sherin Shkoukani, president of Students for Justice in Palestine Wayne State University chapter. “It brings me so much joy to see people from different backgrounds out here. I’ve seen Iraqi flags, Yemeni flags, Bosnian and Albanian flags.

“We are protesting and that is very powerful but we need to take further steps and reach out to our congressional representation and start taking more action on what’s going on in Palestine,” she added. “We are aiding 3.8 billion dollars, just from our own tax dollars to Israel to support what they are doing to Falasteenis.

“We need consistent momentum. I need you (protesters) to take your momentum with you guys every day, all day, even when this current situation dies down.”

President Biden is excepted to visit Dearborn tomorrow to tour the Ford River Rouge Plant. Protests from residents are expected to take place in response.