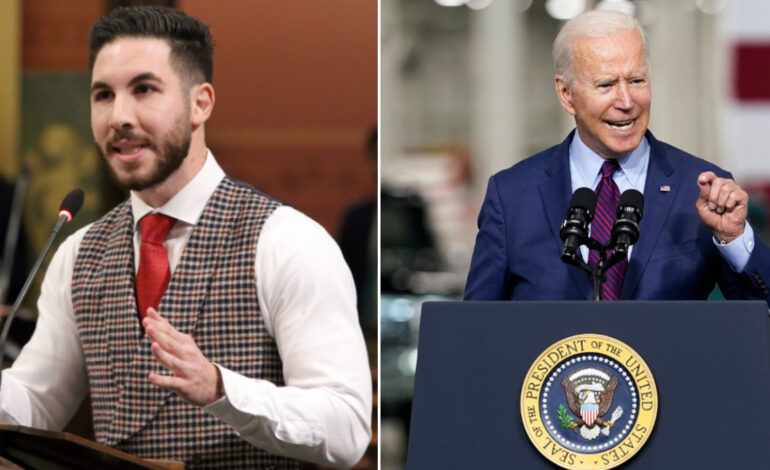 During that brief conversation, Hammoud was able to hand Biden a letter urging him to “use every tool at his disposal” to deliver a ceasefire of hostilities in the Palestine-Israel region, where Israeli attacks have caused widespread destruction in Gaza, and to deliver “true justice, one that contains a free Palestine.”

The death toll in Gaza now stands at 219 Palestinians, including 63 children and 36 women. Though Biden said on Wednesday that he expects a significant de-escalation “on the path to a ceasefire”, in a call with Israeli Prime Minister Benjamin Netanyahu, Palestinians have seen little reprieve from the destruction by Israeli airstrikes, targeting residential and commercial buildings in Gaza under the guise of attacking Hamas operatives. Israel’s actions have seen international condemnation, but the U.S. has so far blocked multiple U.N. Security Council statements on the ongoing violence.

Hammoud spoke to The Arab American News about his interaction with Biden on Tuesday. Hammoud and other officials had been invited to Biden’s visit to the Ford plant in Dearborn’s Southend.

Wearing a kaffiyeh mask, Hammoud approached Biden with the intention of handing him his letter.

“I was standing in line, as we each got a moment with him, and I’m in my kaffiyeh mask,” Hammoud said. “When I walked up to him he opened up by saying ‘I want you to know I’m doing everything I can with the situation at hand.’ So he opened up the conversation. I told him that he should know the community is hurting and that many of us, myself included, and you (Biden) have very similar stories, children of working-class families. We both got into public service for similar reasons.”

Hammoud reminded Biden that losing family had inspired him to serve, much like how losing a family member was a major part of Hammoud’s inspiration for public service.

“I asked him, ‘isn’t that why we’re here?’” Hammoud said. “We’re here to push forward and represent our communities in their honor and to be the best we can be.”

Hammoud told Biden the letter encompassed the way his community feels, and how it’s hurting presently. He asked Biden for his commitment and promise that he will read the one-page letter, and that he looks forward to his thoughts. Biden then introduced one of his key staffers, handed her the letter and promised Hammoud that he would read the letter and respond to Hammoud personally.

Hammoud said he hasn’t heard back from the White House as of yet, but hopes to get a reply in the coming days. Hammoud’s Lansing address is included in the letter.

The Biden administration has approved $735 million in weapons sales toward Israel’s “right to defend itself”, which is in addition to the $3.8 billion per year already granted to the Israeli government by the U.S. Experts from the U.N. and international watch organizations have called Israel’s past and present actions in Palestine illegal and clear violations of human rights.

Biden has failed to acknowledge the overwhelming power of the Israeli military to kill and displace Palestinians, or the campaign of ethnic cleansing in occupied Palestine and attacks on the Al-Aqsa mosque that led to the escalation in violence now in its second week. The failure sparked outrage in the Arab American enclaves of Dearborn and Dearborn Heights, a vast majority of whom voted for Biden in the last election. 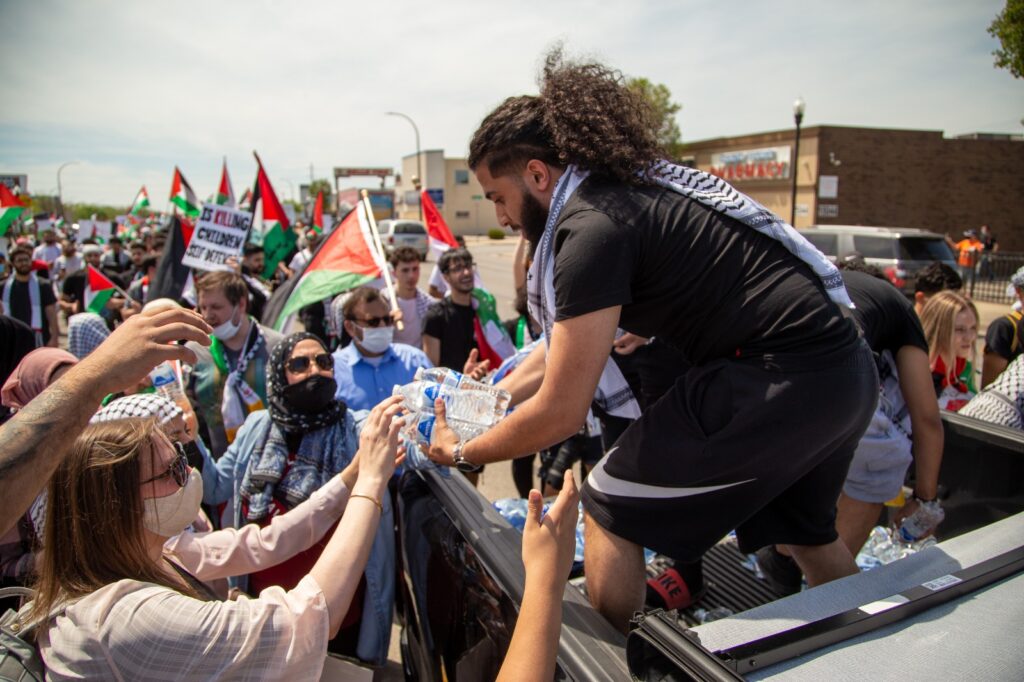 Volunteers hand out water bottles to protesters in Dearborn, Tuesday, May 18, on the occasion of President Biden’s first visit to the city since being elected. Photo: Imad Mohamad/The Arab American News

The narrative (on Palestine) is changing and that’s where my hope lies. My hope is that when change finally comes, it’s not too late — State Rep. Abdullah Hammoud (D-Dearborn)

When asked about his hopes for an end to current and continued Israeli aggressions in occupied Palestine, Hammoud, a Dearborn native, said that a ceasefire “is step one, the easiest step that we can get to” and that his hope lies in the thousands rallying in streets across the world, putting pressure on the White House and global powers to represent Palestinians’ human rights.

“That pressure is mounting and the narrative on Falastin (Palestine) is changing,” he said. “It used to be you couldn’t speak a single word against the atrocities of the Israeli government. Now you have Congress members from all backgrounds, colors and creeds speaking out openly. AOC (U.S. Rep. Alexandria Ocasio-Cortez D-NY) is introducing a decision to block the arms deal that Biden wants them to approve. This was never a reality a few years ago.”

Hammoud also referred to the very public activism of Palestinian American U.S. Rep. Rashida Tlaib (D-Dearborn), who was said to have confronted Biden at his arrival on Tuesday.

“The narrative is changing and that’s where my hope lies,” Hammoud said. “My hope is that when change finally comes, it’s not too late.”

Hammoud’s letter to Biden is presented here in full: 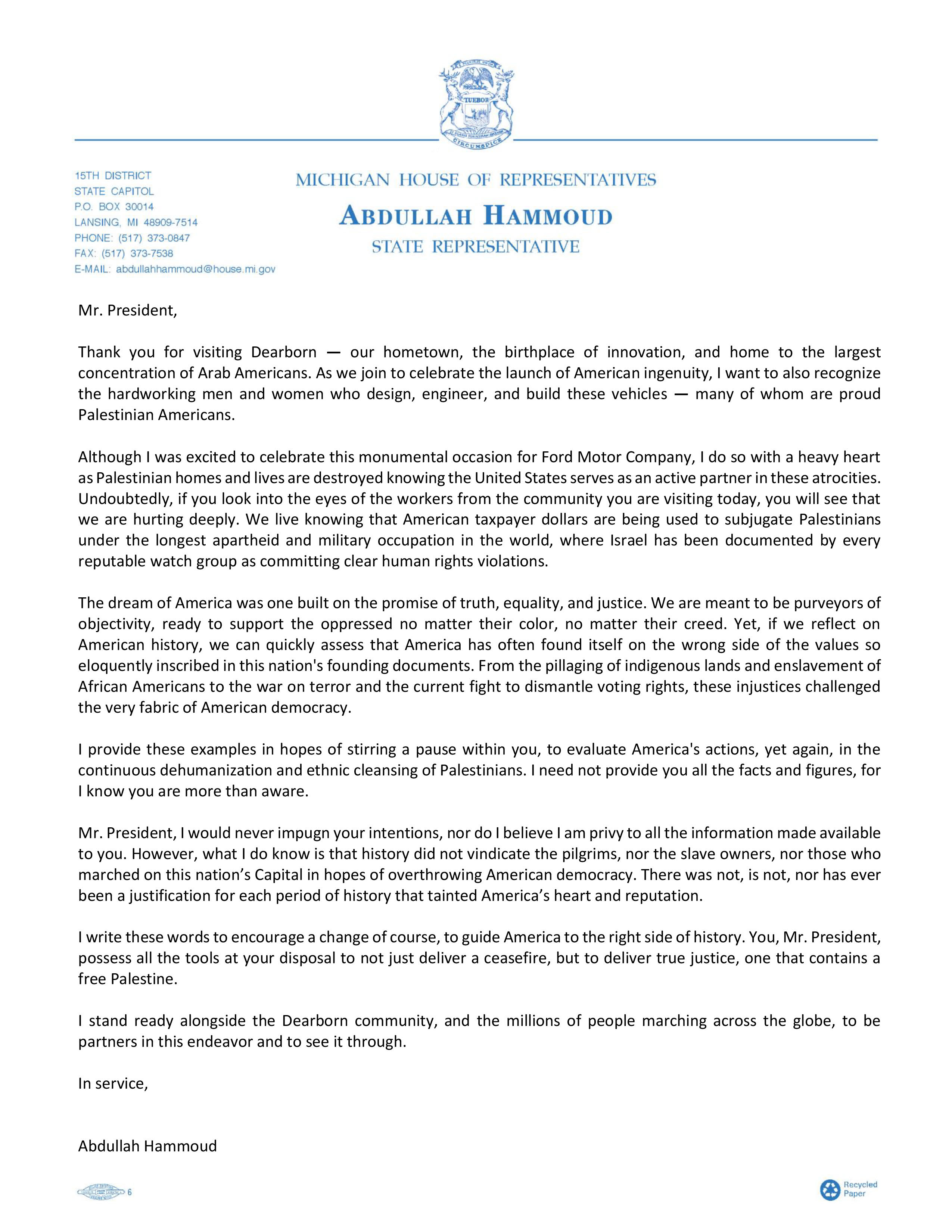