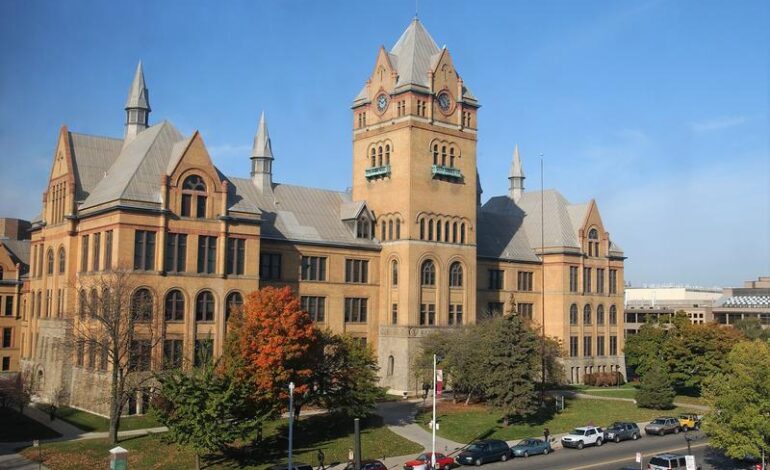 DETROIT — A statement on Palestine issued by the Wayne State University Student Senate has seen objection and censorship from the large urban university’s administration, most notably by President Roy Wilson.

The Senate, which is comprised of dozens of students, had gone through lengthy and intense deliberation on making a statement on the latest violence in the Palestine, Israel region during the days when Israel had proceeded with deadly air strikes on besieged Gaza, killing scores of civilians, including children, and destroying residential and commercial buildings.

Those deliberations can be viewed on the Senate’s Facebook page, and a summary of events can be found on the website of the university’s paper, The South End.

The statement, a summary of which was only allowed to be placed on the Senate’s social media, began by condemning “all forms of anti-Semitism and Islamaphobia” and “violence against Jewish, Muslim, Israeli and Palestinian people in any form.”

It also criticized “violence done at the hands of the Israeli government, currently headed by Prime Minister Benjamin Netanyahu” and the campaign of ethnic cleansing that “has been happening since 1948 and continues to this very day.”

Much of the recent escalations in violence have been linked to Netanyahu’s provocations and emboldening of racist, nationalist segments of Israeli society, and a push to drive out Palestinian residents from their homes in the occupied East Jerusalem neighborhood of Sheikh Jarrah, which is illegal under international law, to make way for Jewish settlers.

Israel’s government has cracked down on protests against those removals; its forces have recently shot rubber bullets at a child, Jana Kiswani, and her family in Sheikh Jarrah for simply standing in their doorway, and has recently arrested sibling activists whose appeals to stop the forced expulsions have garnered international attention.

In days leading up to Israel’s 11-day assault on Gaza, nationalist groups marched in Jerusalem chanting “Death to Arabs”, while Israeli forces besieged worshippers at the Al-Aqsa mosque in Jerusalem’s Old City multiple times during Ramadan.

According to Human Rights Watch, B’Tselem and other renowned human rights organizations, Israel is an apartheid regime. Experts have remarked that it shares some of the central characteristics of colonialism as South Africa.

The statement from the Senate also included mentions of “the United States of America’s compliance and support of ethnic cleansing in Palestine.” It urged the university’s student body to support bills that end the cycle of taxpayer money given to Israel’s military, funneled back to American weapons manufacturers, and used in Israel’s ethnic cleansing campaigns.

The concept of ethnic cleansing as it relates to Israel’s actions in occupied Palestine has been researched and promoted by prominent Israeli, Jewish historian Ilan Pappé, while the history of expulsions itself has been agreed upon by historians like Benny Morris.

It provided resources to learn more about the issue through organizations like Jewish Voice for Peace, Palestine Youth Movement and others, and resources for donations to help Palestinians already crippled by Israel’s blockades, displacements and military assaults. Included in the list was the Boycott, Divestment and Sanctions (BDS) Movement.

The statement referred to counseling services on campus for those struggling during recent days.

“Allyship is an imperative, and silence is not neutrality,” the statement said.

After weeks of deliberation beginning around the start of Israel’s bombing campaign, the Senate finally took a vote on a final draft. Some members had objected to such a statement, some saying the matter was outside of the Senate’s scope, though the body has made such statements during protests against police brutality and a recent strike by farmers in India.

After the final vote to approve the statement, the senators learned that the university’s administration had blocked them from releasing it through its email listserv, which reaches the campus’ student body and faculty.

The Senate was allowed to put an infographic summary of the statement on its social media pages, where it reached a much smaller audience.

Instead, President Wilson issued his own statement late last week in an email to the university that said the Senate’s statement contained “needlessly inflammatory language.”

“Some members of the community have assumed that the statement carries the endorsement of the university,” Wilson’s email to the university said. “It does not.”

Wilson pointed to university “values” and a need to strengthen “diverse points of view” during “tumultuous times like these.” 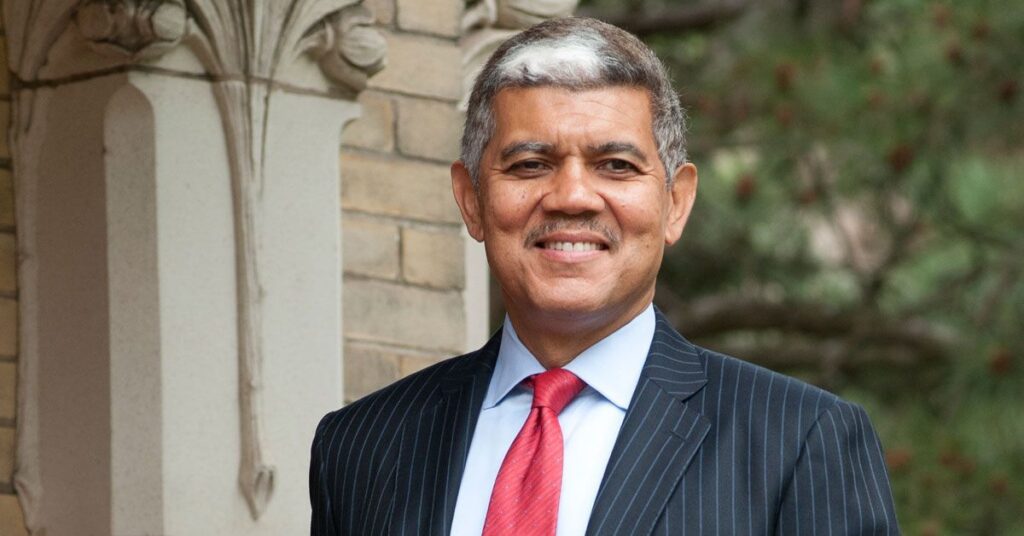 Wilson also said that not all members of the Senate “agreed with the position.” The Senate is not required to pass resolutions through unanimous votes and acts through a simple majority.

Wilson had previously met with the Senate’s executive board to discuss the statement during its initial deliberations over the topic, speaking to its internal disagreements about whether to create such a statement and how.

He had asked the Senate to do its “diligence and explore and make a decision and move on.”

“I want to let you know however we decide to proceed, as long as you do due diligence and explore and act as a group, I will defend whatever you decide and stand by your side,” he had said, as recorded by a member of the board.

The Arab American News has learned that the while the statement was being drafted by a committee voted on by the Senate, it was leaked out to a student organization called Students for Israel.

Before Wilson’s email, and before the Senate had released the summary of its statement on social media, the organization had put out its own statement objecting to the “inflammatory rhetoric” contained in it.

It also called on Wilson and the university’s Board of Governors to denounce the Senate’s statement and said that “the double standard of singling out accusations against Israel, the only Jewish country, while ignoring atrocities around the world, is anti-Semitic.”

After Wilson’s email, commenters on the Senate’s social media expressed confusion as to the “inflammatory” language used in the Senate’s statement on Palestine.

The Arab American News asked the university to clarify which part of the statement Wilson found “inflammatory”, in an email to Mathew Lockwood, associate vice president of university communications.

“The support of free speech and freedom of expression are important to the president,” Lockwood said in an email. “He issued his campus communication to support students’ rights in this regard while also clarifying that the Student Senate’s position was not an official university position.

“He also hoped to assure students who felt threatened by the Student Senate’s statement that Wayne State is welcoming to diverse people and points of view. His motivation for publishing the statement was, as always, the success of all Wayne State students, which requires that students can pursue their studies in a welcoming and inclusive environment.”

The Arab American News spoke to two student senators, who wished to remain anonymous, regarding the matter.

One senator pointed to Wilson’s original promise to stand by the Senate in his meeting with its executive board.

“The email (from Wilson) felt totally backward from what he told the executive board before,” the student senator said. “For me, I don’t feel like I can truly trust him. Why would you tell your Student Senate, which is elected by your student body, that you would support their decision no matter what, and then just totally disregard it? I’m sure he felt pressured. I wonder if he’s even read the statement since there’s a large disconnect between his categorization of it having inflammatory language and the content.”

The senator spoke of the pushback the body had experienced from some of its members, including a faculty advisor assigned to it.

“When it comes to this specific issue, you hear things like it’s not our place to talk about things going on in the world,” the senator said. “But then who gets the right to pick and choose which issues we want to talk to about? That’s selective activism. When it is affecting a large population of our university, we have to say something. It’s really not that complicated of an issue. I’ve now seen in action a lot of the fear tactics (against anti-aparthied activism) that I’ve heard about.”

The behind the scenes scheming from administration is shameful and to lie to your elected student senate by saying one thing and doing another has removed what little faith I still had left in him. It has definitely changed the way I view the university — Student senator

The other senator called the actions of the university’s administration “shameful.”

“I suppose it goes to show that Wilson is willing to lie both to his students and his employees,” the senator said. “It has been shown time and time again, but this time it is even more blatantly apparent.

“The behind the scenes scheming from administration is shameful and to lie to your elected student senate by saying one thing and doing another has removed what little faith I still had left in him. It has definitely changed the way I view the university; and while I can say I stand with the students and faculty and can say I am proud to be with them, I am not proud of anyone in the university administration and they give a horrible name to this institution.”

The Senate discussed Wilson’s email briefly during its virtual meeting last Thursday. A summary of the discussion can be found via The South End.

The Michigan chapter of the Council on American-Islamic Relations (CAIR-MI), a chapter of the nation’s largest Muslim civil rights and advocacy organization, said on Tuesday that it is troubled by complaints of censorship of the statement by Wilson.

“We are troubled by Wayne State University President Roy Wilson’s censorship of the Student Senate statement condemning recent Israeli violence perpetrated against Palestinian civilians,” said CAIR-MI Executive Director Dawud Walid. “The suppression of students’ free speech rights — even if some disagree with their political views — runs counter to the stated ethos of the university, which offers liberal arts education and purports to have an environment in which ideas are allowed to be rigorously debated.”

The Arab American News confirmed with a student senator that Wilson will meet with the executive board to discuss the statement in the coming days.