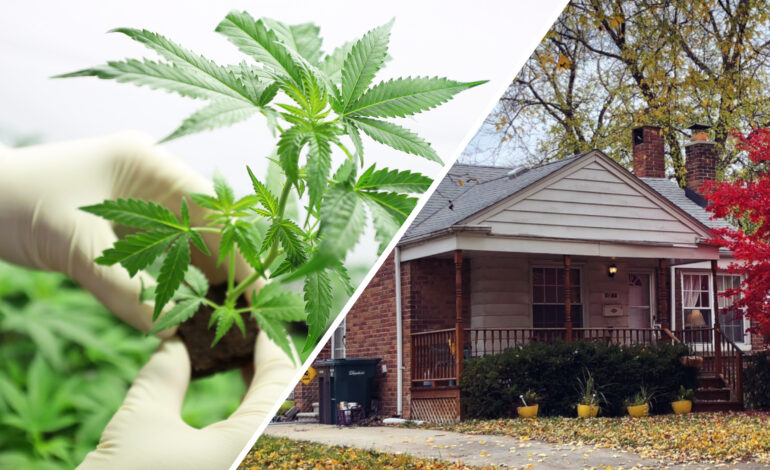 Research says that between 2017 and 2021, property values in Michigan rose $42,169 — an increase that can be partly attributed to marijuana legalization

A new report claims that a rise in property values, and increased city services, can be linked to legalization of marijuana.

The report, led by Dr. Francesca Ortegren, data science and research product manager at Clever Real Estate, looked at the impact of the growing cannabis market and its impact on the real estate values in several states across the U.S.

It says states that have legalized and allowed sales of recreational marijuana see the biggest increases in home values.

Overall, the reports says that between April 2017 and April 2021, property values rose $17,113 more in states where recreational marijuana is legal, compared to states where marijuana is illegal or limited to medicinal use, and Michigan is no exception.

In Michigan, where marijuana legalization came about through a complicated patchwork of ballot initiatives and regulations, with cases seen in civil court, the report says that between 2017 and 2021 property values rose $42,169. Medical marijuana was legalized in Michigan in 2008 and recreational use in 2018, though local cities and towns have had the choice to opt-in or opt-out of allowing dispensaries. Michigan currently has 350 dispensaries.

The report says that as of July, 36 states and Washington D.C. have legalized marijuana for recreational use, medicinal use or both. The industry is projected to be worth $30 billion by 2025.

With each new dispensary a city adds, whether medicinal or recreational, property values increase by $519.

Researchers employed a regression model controlled for population and initial home values to account for nationwide home price increases. Publicly available data from Zillow and the U.S. Census was used, among other sources, to explore the relationships between home values, marijuana legalization, dispensaries and tax revenue.

The report reasons that as states tax marijuana sales for the first time, the increased revenue drives new investment in public services and infrastructure, which in turn drives higher demand in real estate, higher property values and greater revenue from property taxes.

But what about the trends in the national real estate market that aren’t necessarily affected by local conditions? Does the correlation between legalization and a rise in home values necessarily mean tax revenue raised from marijuana has directly gone to improving services?

You may be able to enjoy the benefits of marijuana legalizations, even if you don’t partake in it yourself. — Michelle Delgado, real estate researcher

Michelle Delgado, one of the project’s researchers and writers, spoke to The Arab American News about this connection.

“We want to be careful about correlation and causation, because home values are very complicated and there are a lot of factors that impacts and shapes home values,” Delgado said. “Something that we tried to do in our study is controlling as many variables as we can. We looked at specific years for which we had publicly available data, controlled for things like population fluctuations, and looked at initial home values in 2017.”

Delgado said that by controlling for factors that impact home values, the researchers tried to isolate the impact of marijuana.

“In Michigan, we looked into how tax revenue (from marijuana) was actually used,” Delgado explained. “The taxes that result from marijuana sales in Michigan go to education programs, transfers to local governments and communities and transportation and infrastructure.”

Delgado said that for even for residents who reject, or opt-out of, marijuana legalization, the revenue will lead to better schools, safer roads, more public transit, etc. Michigan collected around $288 million in tax revenue from marijuana sales in 2020.

Above: Hover over a state to see amount of revenue collected. Infographic courtesy of Clever

“You may be able to enjoy the benefits of marijuana legalizations, even if you don’t partake in it yourself,” Delgado said.

The research also says that new industries are bringing in jobs and more demand for real estate, and have an impact on tourism. For example, they noted an increase in tourism for states that have legalized compared to neighboring ones that haven’t.

Delgado said that when marijuana is legalized, crimes rates go down for the obvious reasons that police aren’t going after people dealing in marijuana. Legalization is also connected with reduced incarceration rates and fewer alcohol-related problems.

For more, read the entire report at realestatewitch.com/marijuana-study-2021/