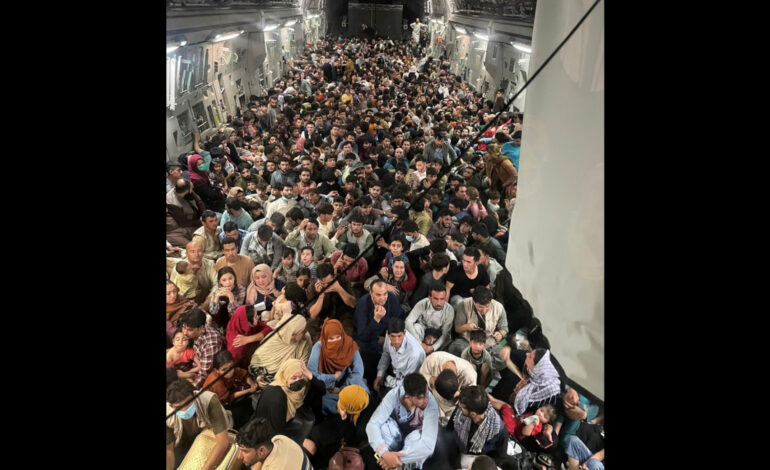 On Sunday, our wayward 20-year war effort in Afghanistan suffered its final death blow. The Taliban rode the U.S.-manufactured Humvees captured from Afghan security forces into Kabul as Afghan President Ashraf Ghani escaped by helicopter. Within hours, Taliban fighters had taken the presidential palace. Workers rushed to paint over billboards that included images of women. And thousands of Afghans took to the Kabul airport in an attempt to flee — clinging to airplanes as they took off.

As if purposely recreated, the indelible final image of the American war effort in Afghanistan hearkens back to Saigon: A lone helicopter ferrying Americans from the roof of an abandoned U.S. embassy.

Books will be written about the full meaning and consequences of this moment. But I want to offer a few contours as we watch this play out.

It is Biden’s fault … and Trump’s, Obama’s and, most of all, George W. Bush’s

The speed with which Afghanistan fell to the Taliban is staggering, owing both to tactical blunders on the part of the Biden administration and the lack of leadership, morale or supplies among Afghan security forces. The speed with which the Taliban took the country underscores the Biden administration’s essential rationale for pulling out of Afghanistan in the first place: They had deemed it an unwinnable war. And once they had decided that victory was impossible, every life lost in its pursuit would have been lost in vain. This necessitated as fast a withdrawal as possible. And yet, the tactical blunder came the moment President Biden announced an aggressive timeline for a full drawdown of U.S. troops. With that he had backed himself into a corner. Staying even a day past the drawdown date would be deemed a domestic political failure. All the Taliban had to do was simply bide their time. The aggressive timeline demoralized Afghan security forces who knew help would not be on the way as the losses piled up.

Biden’s timeline was the tactical mistake in a broader strategic blunder he inherited… from every president dating back to George W. Bush, and perhaps even further. Trump’s failure was declaring an intention to pull out without securing any real concessions from the Taliban, save that they wouldn’t attack U.S. forces on the way out. Barack Obama, despite running in opposition to forever wars, took the quagmire he’d been handed from Bush and turned it into… a forever war. Not only did he surge troops, he vastly expanded the infrastructure of war — the “military-industrial complex” President Eisenhower had warned of after Korea. The drone war miring the U.S. in complex conflicts across seven countries remains one of his few lasting foreign policy legacies. 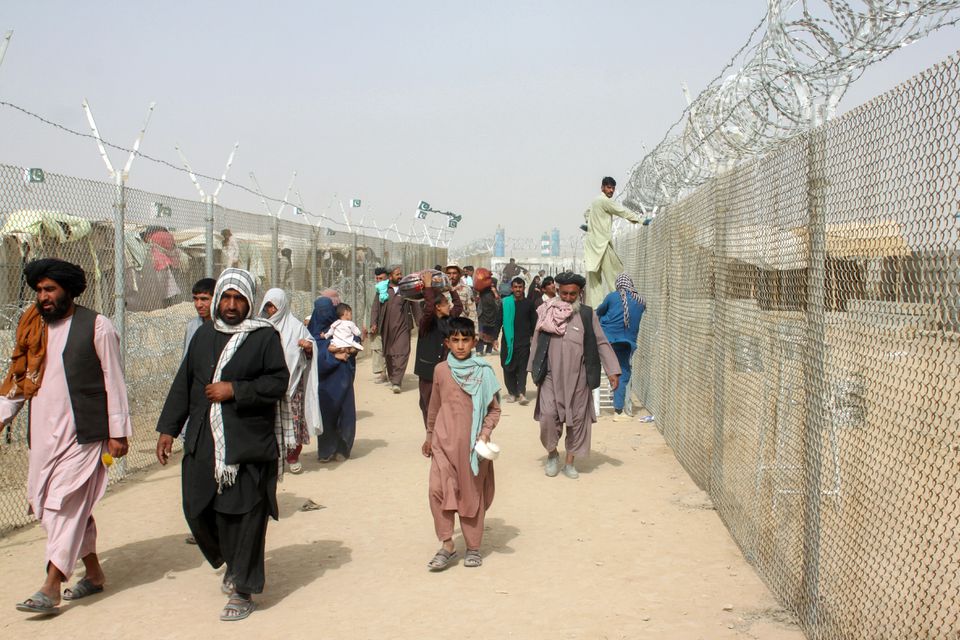 And then, of course, there was George W. Bush, war-maker-in-chief. Though his efforts to root out al-Qaida after 9/11 were wholly warranted, he vastly expanded his remit to full-on democracy exportation. Indeed, the logic he built to expand his remit in Afghanistan is what created the war in Iraq, which of course, pulled attention and resources from the war in Afghanistan.

This is a tragedy for the rights of millions of Afghans

In a few weeks, my daughter will go back to preschool. Millions of Afghan girls may not have that opportunity again. As a father — as a human — my heart breaks for them. Though Taliban spokespeople have claimed that Taliban 2.0 will allow girls education, their repressive fundamentalist interpretation of Islam, coupled with reports from cities they’ve recently captured, suggests that if anything has changed, it’s their PR savvy. The Taliban’s resurgence is a travesty for human rights, women’s rights, basic freedoms and a free press.

Consider a bacterial infection — trust me for a second. Too often, people stop taking their antibiotics when they’re feeling better, only to be hit with a worse version of the infection that is far harder to treat. Doctors tell you to finish the entire course of antibiotics because you have to kill off the whole infection, otherwise the bacteria that survive are the most resistant to the treatment. By this analogy, Taliban 2.0 is likely to be worse. They’ve been hardened by 20 years of war and feel vindicated by the complete collapse of Afghan security forces as they laid siege. The threat of resistance is unlikely to shake them. 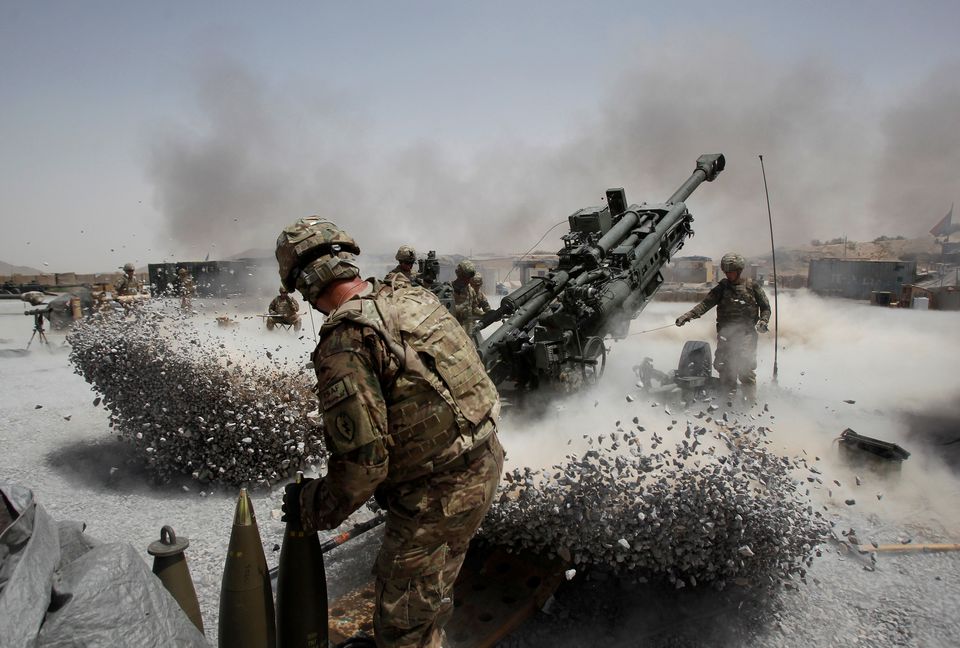 Even if war may not be able to change ideas, it can secure oil. And we did get plenty of that. Afghans, and our Earth, are now suffering for it.

What’s worse is that millions of young Afghans grew up with the promise of basic rights and dignities — even if not in practice, then in principle. They are navigating a new terrain, robbed of the potential they believed they had, that we told them they would have.

Now, you may be thinking: Aren’t you basically arguing that the war was justified? No. All out war was never going to root out the strain of extremist ideology that had governed Afghanistan in the 90s. War didn’t beat communism in Vietnam. War didn’t beat Wahhabism in Afghanistan. Why? Violence can’t extinguish an idea; only the free and willing exchange of better ideas can do that. So while a targeted effort to uproot al-Qaida was justified, a broader regime-change war in Afghanistan was not. Although we sold it as an effort to free people from a repressive ideology and to give Afghans their basic human rights, our war may, ultimately, have done more to take them away.

Even if war may not be able to change ideas, it can secure oil. And we did get plenty of that. Afghans, and our Earth, are now suffering for it.

This is a cross-generational failure

The iconic image of the fall of Saigon was taken in 1975. Forty-six years later we failed to learn the lesson. The parallels between Vietnam and Afghanistan are legion and obvious. But I want to focus more on the path-dependency between them: The fact that the same generation that protested in the streets against the Vietnam War launched us into the second (and third) such war in a few short decades. 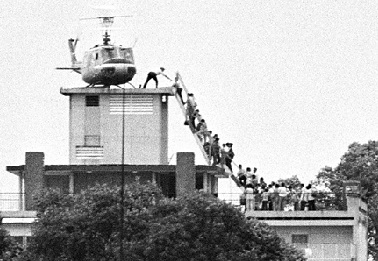 It’s easy to blame boomers as a generation for this war — and so many other travesties of our current circumstance in the U.S. (climate change, rising cost of education, failing public infrastructure and inequality, to name a few) — but I want to call out my own generation for a moment.

We failed the moral test of our generation. I was in college throughout the first several years of the wars in Afghanistan and Iraq. Though I attended rallies against the wars, they were sedate affairs — nothing like the protests that forced policymakers to pay attention in the 60s and 70s. My generation was more interested in internships than international wars in our name.

Back to the boomers. Perhaps they had learned some lessons from Vietnam. Though many of the protests were about atrocities committed over there, so much of the angst was over the drafts that forced a collective generation to have skin in the game. A generation later, lessons learned, there would be no drafts for Afghanistan or Iraq. Our war-making was outsourced to low-income men and women for whom service offered the best shot at stability in an economy that offered none for the latter decade of the wars. Thousands never got to come home. Those who did bear the often invisible scars. Four times as many have died by suicide than have died on the battlefield. Twenty veterans die by suicide every day. The rest of us should have stood for them and the millions more who died as casualties in the countries on whom we made war.

This war has fundamentally changed our country

The logic that enabled the wars in Afghanistan and Iraq has fundamentally changed our country. First, they allowed the logic of securitization to trump our deeply held civil liberties and civil rights. The Patriot Act, which fundamentally usurped basic rights from millions of Americans, could only happen in the wartime atmosphere of the post-9/11 moment. The National Security Agency’s domestic spying apparatus could not have been erected without the permission of the logic of a global war on terror, of which the Afghanistan war was an integral part.

But then there’s also the opportunity cost of war. Our war effort over the past 20 years cost us $2.26 trillion. Unlike, say, universal childcare or free college or universal health insurance, nobody ever stopped to ask, “How are we going to pay for that?” Rather, that spending displaced billions and billions we could have spent on those things… or to rebuild infrastructure that is now far beyond the point of repair. We could have addressed the poverty into which millions fell following the Great Recession. We could have invested in the public health infrastructure that failed so dramatically in the face of COVID-19. We could have invested in a nascent green energy industry.

Not only did Republicans beat their chests for war in Afghanistan, but Democrats, not to be out-patrioted on “national security”, assented to this vision for a new American imperialism.

Rather, we invested in a Department of Defense that crowded out everything else. We manufactured bombs and tanks and rifles to kill people abroad. The war materiel we pumped out would find its way back onto our streets through the 1033 program that repurposed them for police departments, sending the message that we were declaring war at home, too. It helped propel a system of policing that would fill up our jails, mostly with young Black and brown men.

And it dominated our politics. Not only did Republicans beat their chests for war in Afghanistan, but Democrats, not to be out-patrioted on “national security”, assented to this vision for a new American imperialism. Any attempt to question it would be marked as “failing to support the troops” or “letting the terrorists win.”

Twenty years, two trillion dollars and hundreds of thousands of lives later, here we are. And there they are — millions of Afghans whose lives are little better for our folly, chasing airplanes taking off without them.