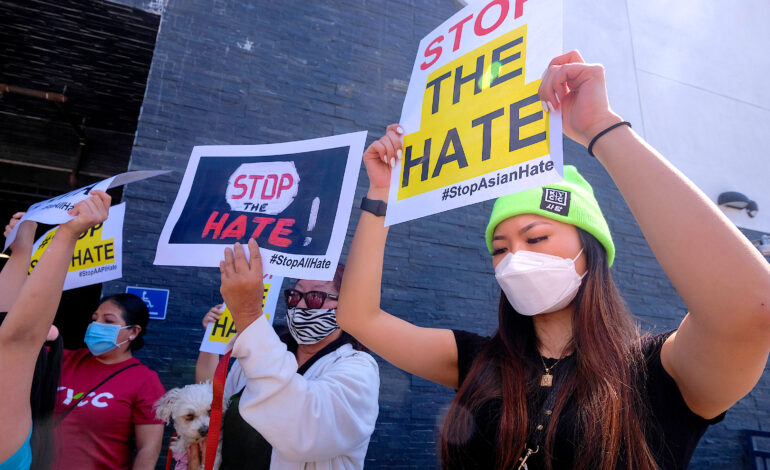 People hold signs to protest hate crimes committed against Asian American and Pacific Islander communities ahead of a car caravan in Koreatown on March 19 in Los Angeles. Photo: Ringo Chiu/Shutterstock

After the release of the FBI’s annual hate crime statistics, a civil rights group is asking the Biden administration to make federal assistance to local law enforcement agencies contingent on their reporting and compiling of hate crime data.

The FBI’s latest statistics on hate crimes show the biggest spike since 2008. The report summarizes data submitted by 5,136 law enforcement agencies, on offenses, victims, offenders and locations of hate crimes.

The FBI says those agencies submitted incident reports involving 7,759 criminal incidents and 10,532 related offenses in 2020 motivated by bias toward race, ethnicity, ancestry, religion, sexual orientation, disability, gender and gender identity, about 450 more than were reported in 2019.

According to the FBI, there were 7,554 “single-bias” (motivated by bias against one characteristic) incidents involving 10,528 victims. But the increase comes as even fewer law enforcement agencies reported hate crimes in their jurisdictions to the FBI than in prior years.

The Council on American-Islamic Relations (CAIR), a nationwide Muslim civil rights and advocacy organization, says the administration should do more to make sure these crimes are reported fully and accurately by local agencies.

“The disturbing rise in hate crime incidents nationwide requires the attention and effort of all law enforcement agencies,” said CAIR Government Affairs Director Robert McCaw. “The fact that the actual number of hate crime incidents is likely much higher than the statistics provided in Monday’s FBI report highlights the pressing need for communication and coordination between agencies.

McCaw said CAIR is calling on Congress and the Biden administration to work together to require the federal government to condition any aid, grants, training or other assistance to local law enforcement agencies on their agreement to submit regular and complete data regarding hate crime incidents targeting minority communities.

Of the 6,431 “known offenders” in the report, 55.2 percent were White and 20.2 percent were Black or African American. Attacks targeting Black people rose to 2,755 from 1,930 last year and attacks on Asian Americans rose to 271 from 164 as misguided and racist sentiment against the population intensified in the wake of the COVID-19 pandemic. The novel virus was first identified in Wuhan, China, in December of 2019.

The FBI also says the data may not be comparable to previous years because of differing levels of participation by local agencies in reporting hate crimes over time. It also discourages ranking locations or making comparisons as crime is a sociological phenomenon influenced by a variety of factors. 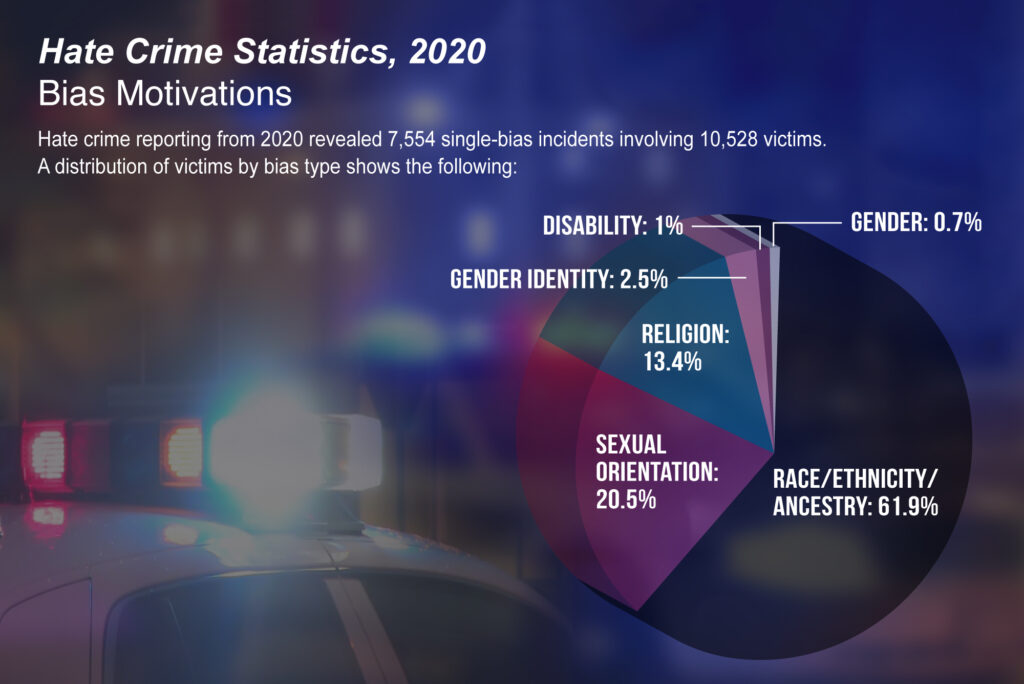 The FBI’s website summarizes the 2020 hate crime statistics, as part of its Uniform Crime Reporting (UCR) program, into several categories:

There were 205 multiple-bias hate crime incidents that involved 333 victims.

One hundred ninety-three (193) additional offenses were classified as crimes against society. This crime category represents society’s prohibition against engaging in certain types of activity such as gambling, prostitution and drug violations. These are typically victimless crimes in which property is not the object.

Statistics on offenders, locations of hate crimes and more can be found on the FBI’s website.