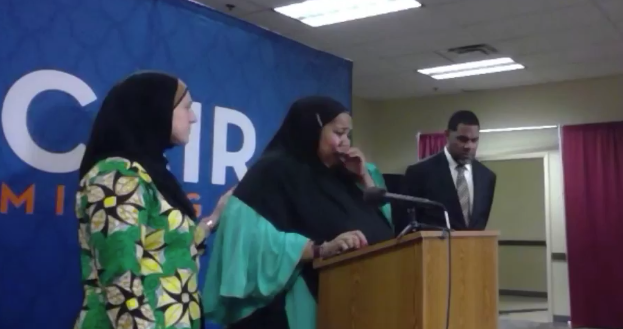 Helana Bowe holds back tears as she is comforted by CAIR-MI Staff Attorney Amy Doukoure at a press conference on Wednesday, Sept. 15. Screengrab/The Arab American News

The Michigan chapter of the Council on American Islamic Relations (CAIR-MI) is asking the Ferndale Police Department to take action after its officers arrested a Muslim woman, subjected her to searches by male officers and coerced her to remove her hijab for a photo, violating her constitutional rights.

In June, Helana Bowe, 40, who is Muslim and African American, was on Eight Mile Road in Detroit, when she was pulled over by Ferndale police for what they claimed was a suspicion of expired tags. Neither her registration nor insurance were expired. When approached, Bowe informed police that she had a taser in her purse she kept for protection.

Officers asked if she had a concealed weapons permit for the taser, which Bowe did not have and did not know she needed. The taser was bought for protection from a nearby gas station after Bowe had earlier been robbed in a public parking lot.

Bowe was arrested and taken to the Ferndale Police Department, where she was searched by a male officer, even though a female sergeant was available and was observing the booking. Standard protocol is clear on searching female detainees by female officers unless one isn’t available or there is an emergency.

Bowe pleaded with the female sergeant to search her instead, but those pleas went unheard. The male guard also removed Bowe’s abaya, or religious body covering, which essentially meant she was in a state of undress.

Originally, Bowe’s photo was taken with her hijab on. The female sergeant on duty in fact told officers that Bowe had a constitutional right to keep her hijab on. An hour later, already traumatized from the search, Bowe was then told by the same sergeant that if she could avoid spending the night in jail by agreeing to a photo without her head covering.

Booking and other police photos are in permanent, public records that are easily accessible. For many Muslim women, the hijab is an important aspect of their public expression and it is well known in much of Metro Detroit, a Muslim and Arab hub, those women keep their heads covered in public.

When Bowe protested, the sergeant assured her that she would be the one taking the picture and that the nearby male officer would not be present. CAIR-MI says it is their understanding that the male guard never completely left the room and only stepped out of Bowe’s view.

Doukoure said at Wednesday’s press conference that what’s further problematic is that when CAIR-MI requested a copy of the booking photo, the only picture Ferndale Police Department sent was the one without Bowe’s hijab.

Bowe voluntarily went back to police station weeks later for an arraignment. Again, while female guards were present, she was subjected to multiple physical searches by male guards, which she again protested. While Bowe was being searched, the male officers lifted up her hijab and placed their hands under her hijab on multiple occasions.

CAIR-MI submitted a “notice of claim”, calling on the department and the city of Ferndale to address the issue, compensate Bowe for the trauma and stress from the incidents and the violations to her constitutionally protected rights and to provide training to staff towards a better understanding of those rights. CAIR-MI is asking for $250,000 in compensation.

… it was like ‘remove your hijab in order to go home,’ so I felt like that was where I was disgraced and humiliated. I felt like they did that because that’s what they wanted to do. — Helana Bowe

A notice of claim is not the same thing as a lawsuit; it is a request by the legal organization for the department to take meaningful action. If no such action is taken or if the department does not reply to the claim, CAIR-MI will then move to action in court.

“At CAIR-MI, we think that we’re taking what is considered to be a soft approach with the city of Ferndale,” Doukoure said.

CAIR-MI is in two open federal court lawsuits, one against the Michigan Department of Corrections and another against the city of Detroit, addressing similar issues with the religious rights of arrestees and prisoners.

“We’ve received very recently, in the last couple of weeks, very favorable opinions from two different judges in the Eastern District of Michigan indication that they felt like our female Muslim clients that had their hijabs forcibly removed for booking photos had their religious rights violated in a manner that violates the constitution and federal law,” Doukoure said.

Bowe was also at the conference and took questions from local media. Bowe is originally from Ohio. She also leads an organization that empowers and supports Muslim women in Michigan who wear hijab, Miss Muslimah USA.

“When they first took my mugshot it was with my hijab,” said a tearful Bowe. “I had never been through nothing like that before and they saw how distraught I was… and they felt they like they were gonna have to not lock me up and put me in jail that night; and it was like ‘remove your hijab in order to go home’, so I felt like that was where I was disgraced and humiliated. I felt like they did that because that’s what they wanted to do.”

A similar incident occurred in Dearborn Heights several years ago, Doukoure pointed out. A lawsuit was filed and the city settled the matter. Doukoure said all jurisdictions in Michigan have knowledge of religious rights over hijabs and other coverings, and have been on notice regarding compliance.

In a statement, the Ferndale Police Department responded to allegations of violations of Bowe’s religious rights. The department earlier told The Arab American News that police administration were not aware of the incident until CAIR’s announcement on Wednesday.

The statement said Bowe was pulled over for a “fraudulent license plate”, but Doukoure told The Arab American News that dash and body-cam footage shows an officer informing Bowe that she was pulled over because her tag comes up expired in the system. Bowe then showed them her updated registration. The officer acknowledged that things seem to be in order and that he will run the information through the system again. The officer then came back to the car and asked Bowe if she had any weapons. Bowe was not charged with any traffic violations.

Use of a fraudulent or counterfeit plate is a felony offense and is not the same as having an expired registration or plate tags, which is a misdemeanor.

The statement also said Bowe told officers that she had a taser, but after a search, officers discovered she had a stun gun—a weapon that is illegal in Michigan. Doukoure said footage contradicts this as well, as officers on the scene never inform Bowe she is in possession of an illegal weapon. Officers can be heard repeatedly calling the device a taser, a “small taser” and have to call a supervisor on duty to determine if carrying it is a crime. The officers do tell Bowe that she may need a permit to carry the weapon.

Bowe was also not charged for carrying an illegal weapon.

The statement said Ferndale Police Chief Dennis Emmi acknowledges that Bowe was asked to remove her hijab for a set of photos.

“Our officers were simply following departmental policy, which includes photographing hair as an important identifying feature,” Emmi said. “Now, in reviewing the case and circumstances, I see the opportunity for our policies to evolve to better meet the needs of our community.”

The statement said the chief will reach out to CAIR-MI to discuss how the department can show increased sensitivity and better serve citizens of the Muslim faith. Additionally, City Manager Joseph Gacioch has tasked the city’s newly established Racial Equity Action Team with delivering a religious and cultural sensitivity training to the entire city of Ferndale staff.

Walid mentioned broader issues relating to the facts of Bowe’s case, especially the circumstances leading up to her hijab being removed, that speak to relations between Detroit and surrounding suburbs.

“Our client was stopped during a traffic stop; she was not driving through the city of Ferndale, she actually was in Detroit and was stopped by the Ferndale police department,” Walid said.

Walid added that this is an ongoing issue with Ferndale that its police department targets African Americans, especially those who don’t even reside in the city, while the city markets itself for diversity and inclusivity.

Walid said that the numbers show that Ferndale police, like the Dearborn Police Department, has an anti-Black racial profiling problem.

Walid may have been pointing to publicly available data collected, organized and recently presented by the organization Accountability for Dearborn (A4D), in collaboration with other local justice organizations, which showed disproportionate ticketing and arrest of Black Americans, many visitors to the city, by the Dearborn Police Department over the last decade.

The data showed that while Dearborn’s residential population is less than 4 percent Black (according to earlier census counts), about 54 percent of all people arrested in the last decade were Black. This includes daytime visitors to the city. Black residents and visitors are overrepresented in Dearborn Police Department’s arrest data.

The data shows most arrests (73 percent in 2019) are conducted along Dearborn’s border with Detroit. Black people are also disproportionately cited more and the majority of tickets given out by Dearborn Police are for violations by those who aren’t able to afford the upkeep or document their vehicles.

The statement by Ferndale police said it maintains that Bowe’s traffic stop and search were conducted ethically and appropriately, and that Eight Mile is a shared road between the Ferndale and Detroit that is routinely patrolled by both police departments. But Doukoure said the stop occurred on the Detroit side of the road.