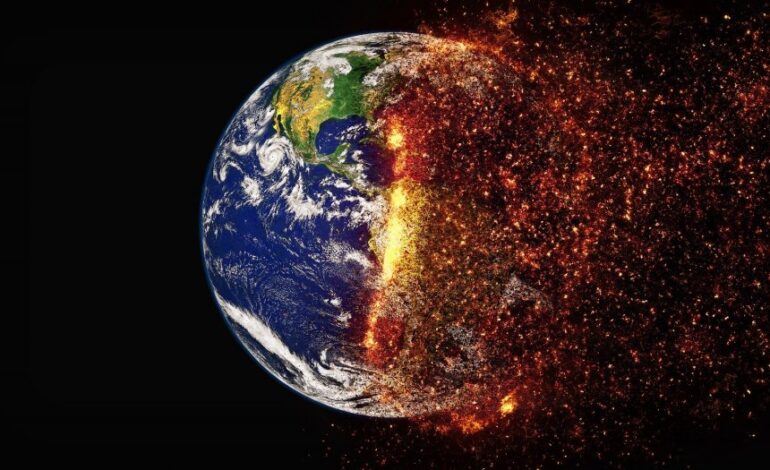 We have a choice about the kind of world that we and future generations will inhabit. But achieving it requires bold investments and a rethinking of our priorities to meet our values.

A yellow-gray haze stains Midwestern skies. Fueled by years of drought and record-setting heat, smoke from the annual devastation of Western wildfires mixes with that from fires spreading across Wisconsin and Minnesota’s Northwoods. Tired of running on an indoor treadmill since May, a young man from Detroit joins his friends for a pick-up street basketball game. But hazardous levels of air pollution trigger another asthma attack and he’s rushed to the nearest hospital.

A heat dome builds over Milwaukee. After more than 25 days exceeding 100 degrees Fahrenheit, much of the construction across the city has been delayed for weeks. But funding deadlines and the urgent need to replace flood-damaged infrastructure forces crews to work in temperatures exceeding 115 degrees. After an entire construction crew falls ill with heat exhaustion, one of them dies before doctors can rehydrate her.

At the end of the season, a young farmer in Western Minnesota looks out over small, parched corn in his fields. It’s rained precious little this summer and not at all in the past several weeks. The soil — once a rich, tillable dark brown when he was a child watching his grandfather plow — is now the color of sand. Deep cracks run through it, mirroring the deep breaks on the man’s face when he finally admits to his family that he’ll have to sell the farm, which has been in his family for four generations.

While some of these future scenes may appear unrecognizable, others already feel too familiar.

While some of these future scenes may appear unrecognizable, others already feel too familiar. However, they are all based on projections for the Midwest in 2050, reported in one of the most respected authorities in climate science, this year’s sixth Assessment Report of the Intergovernmental Panel on Climate Change (IPCC). This report clearly indicates that if we fail to meet the globally accepted climate targets of no more than 1.5 or 2 degrees Celsius by century’s end, such impacts — and worse — are much more likely to happen.

This past summer, as climate change-fueled weather events routinely dominated the news around the country, the number of events attributable to climate disruption — each with damages exceeding $1 billion — had already topped the U.S. annual average by early July. That was before most of the hurricanes and storms hammered the South and East and record-setting wildfires and heatwaves scorched the West. It has become obvious to almost everyone we’re now feeling the effects of climate change. But what is less widely known is that these current climate disasters — both here in the U.S. and around the world — are already exceeding scientific projections from earlier IPCC reports.

However, there is hope in this recent IPCC report: Because a linear relationship exists between greenhouse gas emissions and climate impacts, every ton of carbon dioxide we emit produces a predictable increase in global warming. Put another way, this means that every ton of carbon we don’t emit reduces future climate change. So in a very real way, we only “fail” once we stop trying. If we act decisively, we can still improve the prospects for ourselves and future generations. However, this challenge will require a massive mobilization of our economy and the window to accomplish it is rapidly narrowing.

Right now, Congress is considering two pieces of legislation that will help. One is the bipartisan infrastructure package; the other, the budget reconciliation package. If passed, these bills will do much to address the root causes of climate change and to protect Americans from its worst impacts. Together, they clean up our power supply, incentivizing the transition from fossil fuels to clean energy. They create opportunities for clean energy manufacturing jobs, which will return to Midwestern communities that were left behind. They replace increasingly vulnerable infrastructure and improve the reliability of the electricity grid.

We have a choice about the kind of world that we and future generations will inhabit. But achieving it requires bold investments and a rethinking of our priorities to meet our values. And it requires that our representatives in Congress consider a future beyond their next election.

Now imagine some alternative scenes from a future in which we passed these bills and prioritized curbing climate change. Fresh out of technical college, a young woman moves to Lansing, Michigan for a job at a new battery manufacturing plant paying a living wage. The promise of the green economy provides a secure future for her and her family. A grandmother living in St. Paul boards a high-speed rail train. Four and a half hours later, she’s in Chicago to meet her son and baby grandson. A farmer near Decorah, Iowa celebrates the one-year anniversary of leasing his grazing land for wind turbines. He uses this income to improve the profitability of his family farm. Meanwhile, our power grid hums in the background, unnoticed because it lasted through previously destructive storms. Over time, global temperatures begin to stabilize as we approach zero net emissions.

We have a choice about the kind of world that we and future generations will inhabit. But achieving it requires bold investments and a rethinking of our priorities to meet our values. And it requires that our representatives in Congress consider a future beyond their next election.

– Dr. James Boulter is a professor of chemistry in the Public Health and Environmental Studies program at the University of Wisconsin—Eau Claire. He received a Ph.D. in analytical chemistry with an emphasis in atmospheric sciences from the University of Colorado, Boulder.