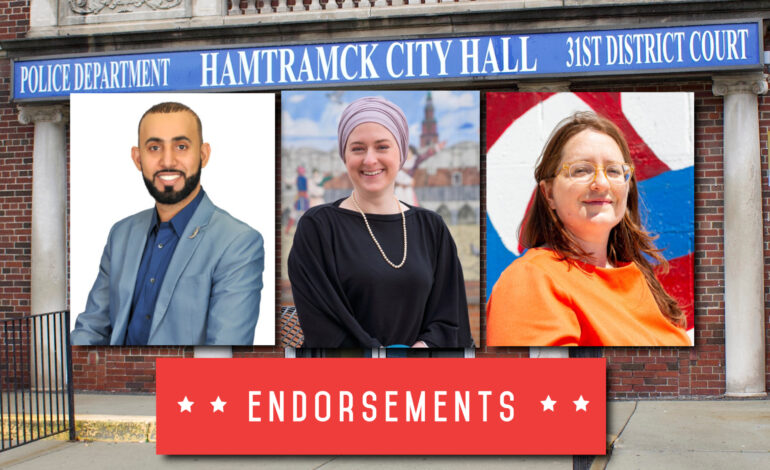 The Arab American News interviewed the six candidates who are running for the three seats on the Hamtramck City Council and have decided to endorse the following three candidates for the four-year term.

Khalil Refai is the front-runner during this election, leading in the polls during the August primary. Recently, he has been endorsed by Yemeni American Policcal Action Committee (YAPAC) and the American Arab & Muslim Political Action Committee (AMPAC), as an entrusted leader to serve Hamtramck. A product of Hamtramck Public Schools, Refai has stayed actively involved in activities and events in the community, including cultural gatherings, addressing major issues such as flooding and encouraging education for the city’s youth. Refai takes part in frequent “Candidate Lunches” with fellow candidates in an effort to build trust and partnership, whilst discussing pressing community issues.

Amanda Jaczkowski is a dedicated Hamtramck resident with years of experience in the nonprofit sector, namely United Way of Southeastern Michigan, concerning residents’ employment needs. Her main concern is rebuilding trust between residents and City Council by advocating for more aims toward transparency of city government. Recently, she received a master’s in public administration and looks forward to implementing the tools and strategies she has gained in propelling Hamtramck forward with a capable, steady hand. Jaczkowski is endorsed by various community groups, including AMPAC, EMGAGE, Rising Voices, YAPAC and Young Democrats of Michigan.

Lynn Blasey is well involved in different community initiatives, particularly the burgeoning arts and culture scene of Hamtramck. Blasey has experience in serving thousands of local students in arts projects and worked on the Hamtramck Arts and Culture Commission as vice chair. She has dedicated her life to studying Middle Eastern culture and history, connecting with a large voting block of Hamtramck. Formerly working with the Arab American National Museum, Blasey has served as an educator and leader in youth programming. She is passionately involved in creative solutions addressing the city’s issues according to the Master Plan, including the revitalization of city lots into green spaces in an effort to tackle flooding concerns.