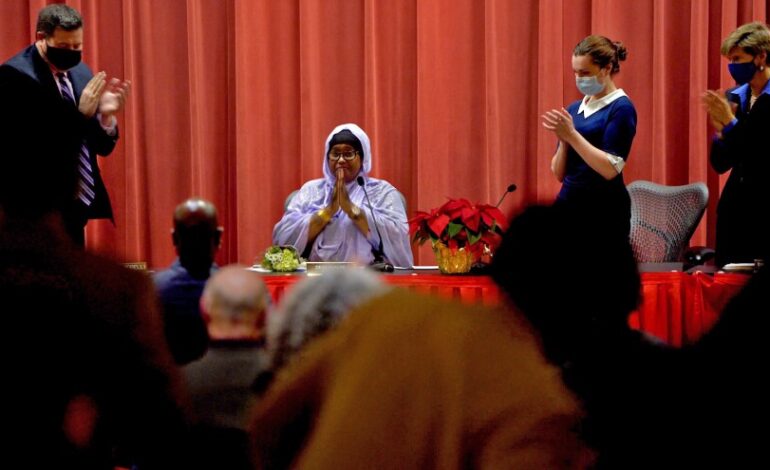 Deqa Dhalac was sworn in as the new mayor of South Portland, Maine on Dec. 7. Photo: Rebecca Conley/Maine Public

Deqa Dhalac, 53, is believed to be the country’s first Somali American mayor. Dhalac won a City Council seat back in 2018, being the only non-White candidate for a Council seat in the Whitest state in the U.S. She ran again unopposed last year. The U.S. Census shows South Portland to be 90 percent White.

The South Portland City Council selects a mayor from among its members. Dhalac’s fellow City Council members, who are all White, elected her in an unanimous vote on Monday, while giving her praise for her dedication to the community. The Council supported her nomination in November.

The Council on American-Islamic Relations (CAIR), the nation’s largest Muslim civil rights and advocacy organization, welcomed the inauguration of a Muslim woman as mayor of the city.

“We welcome the inauguration of Mayor Deqa Dhalac as a sign of the increasing civic involvement of the American Muslim community,” said CAIR National Communications Director Ibrahim Hooper. “We hope Mayor Dhalac will help inspire a new generation of American Muslims as they take an increasing role in building a better society.”

He noted that earlier this year, CAIR, Jetpac and MPower Change released a comprehensive report of all Muslim-identifying candidates who ran for public office in 2020. In that election cycle, a record number of 181 Muslim candidates ran for office in 28 states and Washington D.C.

The news comes as Michigan made national and international headline for successful mayoral elections in November for three Muslim, Arab American candidates in Dearborn, Dearborn Heights and Hamtramck. But those cities already have strong, if not majority, immigrant populations, unlike an overwhelmingly White city like South Portland.

CNN reported that on Monday so many people wanted to attend Dhalac’s inauguration that organizers had to move it to a larger auditorium.

“I’m… really proud of the fact that I’m going to be opening a lot of paths for other folks who look like me, especially our young community members, to say, ‘If this woman can do this, actually I can do that,'” Dhalac told the City Council in November after her nomination.

Ghida Dagher, president of New American Leaders, an organization that trains and encourages immigrants to run for office, said Dhalac’s leadership will make a big difference for immigrant representation, not only in South Portland but around the country.

“She’s going to serve an example for Somali Americans across the country to step up and step into their own leadership journey… It’s about owning their own power and potential in our democracy,” Dagher told CNN.

Dhalac immigrated to the U.S. in 1992 and soon began organizing fellow immigrants to become citizens and vote. The former presidency of Donald Trump, who publicly denigrated Somali immigrants, was a catalyst in her eventual decision to run for an open City Council seat in 2018.

It is estimated that about 6,000 Somalis live in Maine, due to a wave of migration that began in the early 2000s. Though there may be some hesitancy around the country when it comes to immigrants represented in leadership roles, there is forward momentum, especially among Somali Americans. A notable example is U.S. Rep. Ilhan Omar (D-MN).

Dhalac told CNN she was grateful for her community, who could have seen her as a stranger, but welcomed her instead.