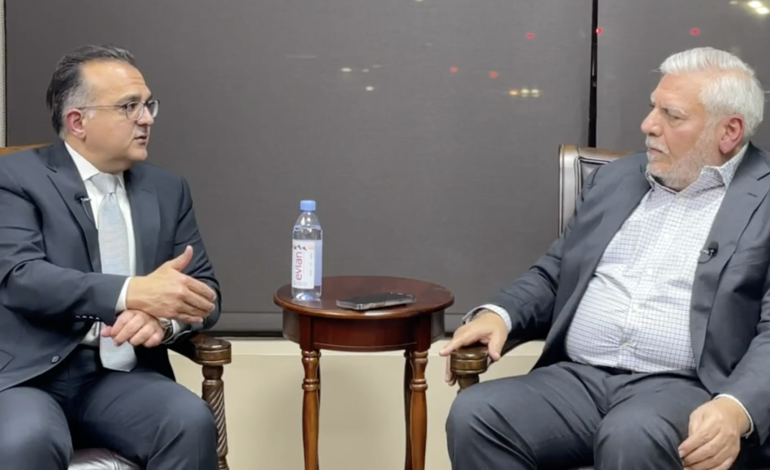 Dearborn’s City Council president-elect is speaking out against the efforts of the outgoing administration to illegally create a position for one of its political appointees in the new city administration.

Dearborn City Councilman Mike Sareini, who is also Council president-elect, stopped by The Arab American News offices to chat with Publisher Osama Siblani about the matter, which has also outraged much of the community.

The issue stems from the resignation of current Public Information Director Mary Laundroche, who announced she would be leaving her post during the city’s transition, but also apparently applied for and was hired into a newly created civil service position with an almost $80,000 salary.

According to the city’s Legal Department, such a position has to be approved first by the Council during its budget approval process. The current administration did not do so in creating the position after the election of Mayor-elect Abdullah Hammoud.

Hammoud has asked the outgoing administration to put a hold on hiring as the city grapples with a voter-approved budget shortfall of around $15 million. His transition team has also asked for a freeze on new hiring and has created a portal for interested applicants in the new administration.

The new position, given to Laundroche, is a “neighborhood liaison” for the city’s Property Management Department.

After learning of the creation of the new position, Sareini asked the city’s Legal Department to give a ruling in writing about whether it was created legally. The city’s attorneys said it was contrary to the City Charter.

After being informed by the Legal Department of the improper way the position was created, the Property Management director went in front of the outgoing City Council, at its meeting on Dec. 7, to ask them to approve the funding of the position, which they did 5-1, with only Sareini voting no.

“Now in the last minute, this position that was supposed to generate funds that now has excess is being put into a neighborhood liaison position (and given) to a director who is about to retire in the next two years or 18 months so she can have a job to retire on,” Sareini said at that meeting.

The liaison, who attends city’s various neighborhood association meetings, was previously held as side role by the previous deputy director of the Property Department.

Community members have expressed dismay that the administration would create such a position illegally and then rush it through to give it to one of their own.

Hammoud had told me that he would find something that she could do that was productive that the citizens and the taxpayers value, (but) not to create a new job for her that didn’t exist, that the Council didn’t budget for, to go around and meet with neighborhood associations and pay her $80,000 plus benefits. — Council President-elect Mike Sareini

Last Tuesday, Sareini told Siblani that he had spoken with Hammoud and that Hammoud had communicated a willingness to keep Laundroche on in a productive position, after her years of service.

“He had told me that he would find something that she could do that was productive that the citizens and the taxpayers value, (but) not to create a new job for her that didn’t exist, that the Council didn’t budget for, to go around and meet with neighborhood associations and pay her $80,000 plus benefits,” Sareini said.

With benefits, the new position would cost the city more than $100,000 a year. There are about 10 or 12 neighborhood associations in the city, which meet once a month.

After Council approval on Dec. 7, the position is now funded until June, after which the new Council could eliminate it from the new budget. But under the rules of the Civil Service Commission, which sets protocol for such jobs, Laundroche would just be moved over to another position, effectively providing her a position from which to retire.

Sareini said he is not convinced the new position is important enough, or that the salary is commensurate with the task, for the administration to rush it through while circumventing laws and for his outgoing colleagues on Council to vote for it, with the city looking at facing a budget shortfall.

The administration has also filled other part-time positions. This includes the hiring of current Chief of Staff Mark Guido’s daughter in a part-time position in the Public Information Office. A campaign staffer for former Council candidate Lola Elzein and volunteer for former mayoral candidate and outgoing Council President Susan Dabaja was put into the office of the Council through a paid internship.

Sareini also talked of a vacant lot in west Dearborn on Michigan Avenue, next to Dave’s Hot Chicken, that the outgoing administration  approved to a lower bidder, which he objected to for similar reasons as the rush to fill positions.

“Property sales of this magnitude that are gonna affect your downtown planning should be left to the next administration, not the outgoing administration,” Sareini said.

The property has been sitting unsold for some 10 years. Moreover, the property was not given to the higher bidder. The bidder who lost out on the property also complained that the city never asked for a verification of funds on a very expensive project, something it had gotten burned on over the sale of the same property in the past.