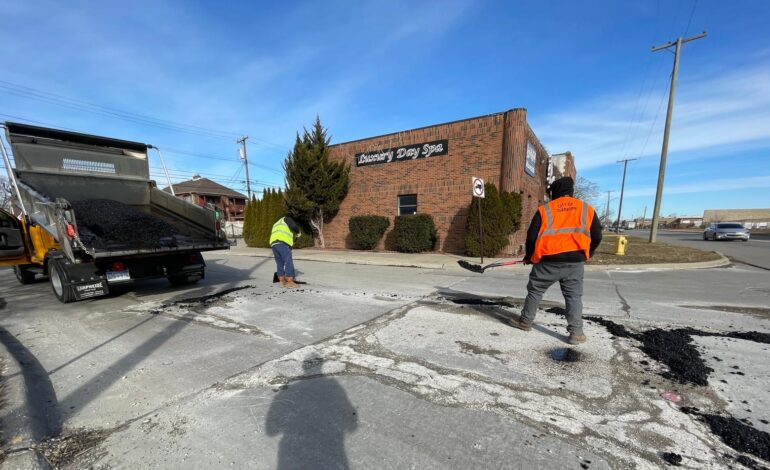 DEARBORN — With local drivers suffering through a particularly bad pothole season, we reached out to the city of Dearborn to get insight on how it’s tackling the problem on the neighborhood roads it maintains.

Damage from deteriorating roads is a real financial burden for drivers, in Michigan and beyond. AAA says U.S. drivers spend nearly $3 billion a year fixing damage caused by potholes.

A recent study says Michigan has the nation’s third-worst potholes, based on Google search statistics. The average national repair bill associated with one of these pothole mishaps is $306, according to that study.

But a Dearborn-based auto body shop told The Arab American News last week that a single wheel on a new car can run upwards of a $1,000, with suspension work costing as much as $2,000 to $3,000. That’s damage to multiple points of the suspension, shocks, control arms and more.

There is a way to file damage claims with Wayne County and with the state of Michigan on roads in their jurisdictions, but some 90 percent of those claims are denied based on government immunity laws.

It is important to note that the state is in charge of road with the M, I or U.S. letters (such as I-75 or Michigan Avenue). The county repairs major roads running through Dearborn like Miller Road. Dearborn’s Department of Public Works (DPW) oversees nearly 300 miles of roads within city limits.

A more expansive list of county and state roads running through Dearborn can be found on the DPW’s website.

So how are repairs on Dearborn streets funded?

It turns out that road projects in Dearborn are not funded by the city’s general fund or by revenue from property taxes.

“Road repairs, resurfacing and/or reconstruction in Dearborn are funded by the ACT-51 funds received from the state of Michigan (gasoline tax),” the city said in an email response. “There are also very limited annual funds through the Community Development Block Grant (CDBG) to resurface approximately half to one mile of road in low-income areas.

“In addition, there is also a very limited amount of federal aid available to resurface approximately half to one mile of federal aid eligible roads (major collector roads).”

This is the case for all roads in the state in fact, with maintenance and repairs being paid for by a mix of federal fuel tax money, grants, county funds and even local millages paying for repair projects.

In 2019, Wayne County released a report saying it needed to invest more than $3 billion over the next decade to achieve the goal of having 90 percent of its roads and bridges in fair to good condition and all critical bridge needs addressed by 2029.

The city said the potholes are caused by the freeze-thaw cycle that occurs with the weather conditions of late winter and early spring. As the moisture freezes in the winter, it causes the ground to expand, pushing the pavement up. This results in stretching and essentially popping the seam of the pavement.

When the temperature warms and the ice thaws, the ground returns to a normal level. But the pavement that got pushed up doesn’t return with it and this results in a separation of the pavement from the road.

But is there a way to mitigate the problem, by use of certain materials and techniques, so that potholes aren’t an inevitability every year?

“While new and innovative techniques can help, the root cause of this problem is the total amount and allocation of roads funding in the state of Michigan,” the city said. “The policy consensus is that the overall funding is not adequate enough and not allocated as equitably as it should be based on population and overall usage.”

The city says its Public Service division employees are working on repairing and patching main area city roads and residential streets. Currently, crews of four people are working on main city streets and crews of two are working in residential areas. There is also an additional midnight shift of teams of three patching roads every night.

For county roads, citizens can report potholes online on the Wayne County website at https: waynecounty.com/departments/publicservices/roads/report-a-road-hazard.aspx or via the County Hotline at 1-888-762-3273.

For state roads, potholes can be reported online on the Michigan Department of Transportation (MDOT) website.