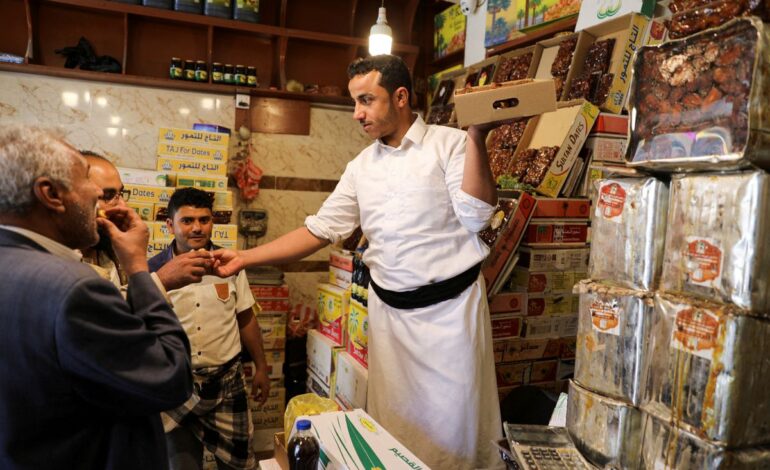 ADEN/SANAA – Aqeel bin Thabet, a university professor in the Yemeni city of Aden, used to buy one or two sheep to eat during the Muslim fasting month of Ramadan, but because of soaring prices this year can only afford meat from a butcher once a week.

Others in the city like 50-year-old Intisar Ahmad said she will have to forgo meat and sweets and suffice with “what we can to fill our stomachs.”

She said the price of 50 kg bags of sugar and white flour in Aden had jumped 40 percent in less than a month.

Yemen’s seven-year war has divided the country between the Houthis in the north and the internationally recognized government, now based around the southern city of Aden after being forced out of the capital, Sanaa, by the Houthis in 2014.

The war has pushed millions into hunger and a plunging currency in the south and fuel shortages in the north have put food and other goods further beyond the reach of most Yemenis.

Ramadan is observed by abstaining from food and drink during the day and it is traditional that Muslims break the fast with large meals after sunset.

“Ramadan this year is different from all years, a crazy surge in prices,” said Wael al-Sulwi in Sanaa.

Access to fuel has been increasingly difficult throughout Yemen, but especially in Houthi-held areas because of a blockade imposed by the Saudi-led coalition that backs the government against the group.

In Aden, the riyal has fallen some 20 percent against the dollar since January. Yemen has two competing central banks, so the value of the riyal differs depending on the region.

Professor Thabet, who has five children, says his monthly salary used to equal $1,200 a few years ago, but is now worth $250.

“Do they want to push the country to complete hunger, which is now knocking at the door of many comfortable families,” he said angrily, criticizing the government and traders.

A two-month truce between the warring parties that began on Saturday aims to bring some relief by allowing fuel shipments into Houthi areas.

But the impact has yet to be felt.

“People are very crushed and there are people who cannot buy the basics for the month of Ramadan, and this is a catastrophe,” said Ahmad Sumay, a professor at Sanaa University.