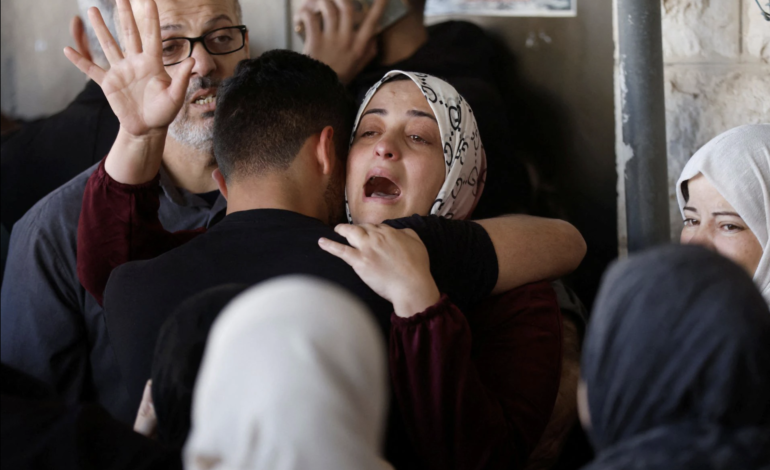 A relative reacts after Israeli forces killed Palestinian Mohammed Assaf during clashes in a raid, according to medics, in Nablus, in the Israeli-occupied West Bank, April 13.. – Photo by Reuters

RAMALLAH – Israeli soldiers shot dead three Palestinians in the occupied West Bank on Wednesday, including a teenager and a lawyer, the Palestinian Health Ministry said, as troops mounted more sweeps in the territory after deadly Palestinian attacks in Israel.

The Health Ministry said soldiers shot and killed a 14-year-old near Bethlehem. The Israeli military said he had thrown a petrol bomb at the soldiers, who “used live ammunition in order to stop the immediate threat.”

In a separate incident, a Palestinian was killed by Israeli military gunfire in Nablus, on a main street near Joseph’s Tomb, the ministry said, referring to a Jewish shrine where Israel carried out repair work on Wednesday after Palestinians had vandalized it.

The ministry identified him as Mohammed Assaf, 34, a lawyer who worked for a department of the Palestine Liberation Organization that documents and lobbies against Israeli settlement activity on land Palestinians seek for a state.

An official from the PLO anti-settlement unit said Assaf had been driving his nephews to a nearby school and had stopped on the side of the road to watch events unfold when clashes erupted at the tomb.

A military statement on West Bank operations on Wednesday said an “armed suspect” was hit near Nablus. It was unclear whether it was referring to Assaf.

Israeli troops had secured the area around the tomb while the repair work was under way. The military said hundreds of Palestinians threw stones and petrol bombs at the soldiers, who responded with live fire and riot dispersal measures.

Near Ramallah, the Palestinian Health Ministry said another Palestinian was killed in clashes that erupted after Israeli forces carried out an arrest raid. There was no immediate comment from the Israeli military or police.

The Shin Bet domestic security service said three Palestinians planning to carry out an imminent attack against Israelis were apprehended in that raid. Around 20 people described as “terror suspects” were detained in Wednesday’s operations, according to Israeli forces.

The Israeli military stepped up its raids in the West Bank following attacks by two Palestinians from the territory and three members of Israel’s Arab minority, which have killed 14 people in Israel since late March.

More than 20 Palestinians have been killed by Israeli forces since January.

The Palestinian Foreign Ministry said on Wednesday it held Israel “fully responsible for the repercussions” from the military’s actions and a spokesman for President Mahmoud Abbas appealed for the international community to intervene.

Israel has accused the Palestinian Authority of not doing enough to rein in militants and of encouraging violence against Israelis by paying stipends to families of Palestinians in Israeli jails, some of them convicted of deadly attacks.

The bloodshed has coincided with the start of the Muslim holy month of Ramadan, when Israeli-Palestinian violence has erupted in the past, and last May spiraled into an 11-day war between Gaza and Israel.

VP Harris condemns attacks in Israel in call with its president

Vice President Kamala Harris condemned attacks in Israel that have killed 14 people and said U.S. support for Israel’s security was unwavering in a call with Israeli President Isaac Herzog on Thursday, the White House said.

“The vice president expressed support for continued efforts to reduce tensions,” the White House said in a statement.

– Reuters, edited for style and contents