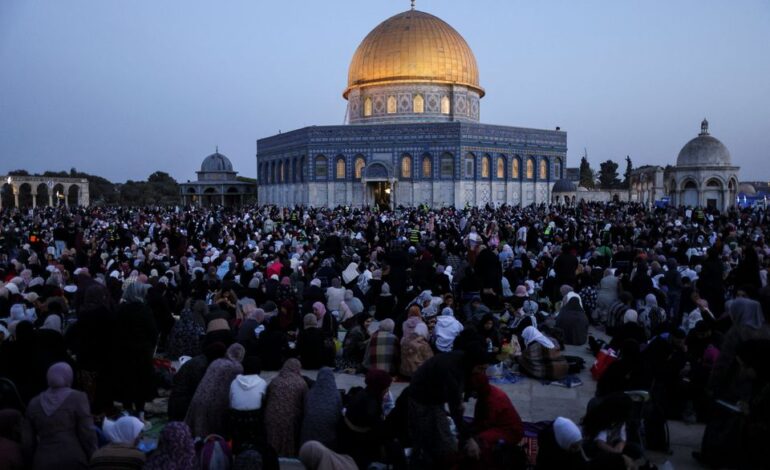 Palestinians pray on Laylat al-Qadr during the holy month of Ramadan, at the compound that houses the Al-Aqsa Mosque and the Dome of the Rock, known to Muslims as the Noble Sanctuary, in Jerusalem's Old City, April 27. Photo: Ammar Awad/Reuters

Jordan has intensified efforts to push Israel to respect the historic status quo of Jerusalem’s Al Aqsa mosque and avoid violent confrontations that could threaten a wider conflict, Jordanian officials and Western diplomats said on Thursday.

The officials said Jordan had notified Washington it was ready to discuss the issue with Israel after the end of the holy month of Ramadan next week. The aim would be to identify steps that Israel could take to return conditions at the mosque to those of 22 years ago.

Jordan accuses Israel of having gradually changed restrictions on worship at the mosque since 2000.

The new diplomatic effort is “to deal with the roots of the tension and ensure that matters don’t explode again,” a Jordanian official who requested anonymity said, adding that Washington had recently been given a paper that “clearly” stated the kingdom’s position.

Israeli police attacks on Palestinians at the mosque compound have stoked Arab anger and international concern about a slide back to a wider Israeli-Palestinian conflict.

The compound, known as the Noble Sanctuary, is the third holiest site in Islam and has been a site of Israeli police aggression and right-wing anti-Arab public rallies. Jews refer to it as the Temple Mount and regard it as the holiest site in Judaism.

Jordan, whose ruling Hashemite family has custodianship of the Muslim and Christian sites, says that since 2000 Israel has undermined a centuries-old tradition under which non-Muslims do not worship in the mosque compound.

A Western diplomat said Jordan’s proposal did not include convening a joint committee with Israel concerning Muslim and Christian shrines in the Old City of Jerusalem. Several Israeli media outlets said it did, but Jordan is unwilling to concede a such a formal role for Israel.

Jordan, whose ruling Hashemite family has custodianship of the Muslim and Christian sites, says that since 2000 Israel has undermined a centuries-old tradition under which non-Muslims do not worship in the mosque compound.

Amman told Washington that Israel should end restrictions on staffing of Jordan’s religious Waqf administration and let it manage all visits by non-Muslims and prevent worship by them, the sources said.

Israel denies accusations by Jordan and Arab states that it has tried to change the status quo of Muslim holy sites in the Old City of Jerusalem, which it has illegal occupied since the 1967 Arab-Israeli War. It also says it is enforcing a long-standing ban on Jewish prayer at the compound.

Jordan says Israel is restricting access by Muslim worshippers and not restraining Israeli far-right nationalists whose rituals violate the former status quo and, from an Islamic point of view, desecrate the holy site.

“Jordan is continuing its contacts directly with the Israelis and Washington and other international parties to demand that Israel respects the historic situation that existed before 2000,” another Jordanian official said.

On Friday, Israel banned non-Muslim visits until the end of Ramadan. This was a “good step to respecting the status quo and easing tensions and restoring calm,” Jordan’s Foreign Minister Ayman Safadi told Reuters.