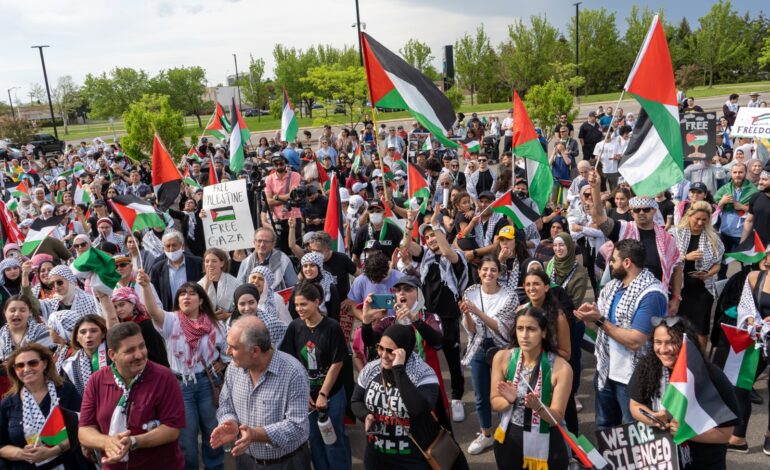 The rally, which occurred in front of the Ford Community and Performing Arts Center, was one of two such events in the city last weekend.

The rally had been organized to commemorate 74 years of the Nakba, or “catastrophe” in Arabic, referring to the mass expulsion of Palestinian Arabs from British Mandate Palestine to make way for Zionist efforts to create the state of Israel.

Historians and activists have noted the significance of the event as it relates to Israel’s current and ongoing occupation and system of apartheid over Palestinians, including illegal settlements and segregated communities in the Palestinian West Bank, the economic blockade and numerous deadly military attacks on Gaza (known as an open-air prison) and denial of refugees’ right of return.

A major component of the earlier planned event was calls for justice in the Israeli occupying forces assassination of renowned Palestinian American journalist Shireen Abu Akleh.

Abu Akleh was covering an Israeli raid on a home in the Jenin refugee camp in the occupied West Bank when she was shot in the head, likely by sniper fire, with fellow journalists giving testimonies that Israeli occupation forces shot at them.

Though originally blaming Palestinian fighters in Jenin, Israel later conceded that an Israeli soldier might have been responsible for the killing, though there is slender hope that Israel will conduct an actual investigation into its forces’ actions.

In the days since her death, Israel has implied “fighting” had taken place in the area of Abu Akhleh’s death between its occupation forces and Palestinian fighters, though video released by Israel itself shows those fighter were hundreds of yards away and obscured by alleyways and neighborhoods.

At Sunday’s rally, a multi-ethnic and multi-religious coalition of speakers spoke against the occupation and demanded justice for Israel’s human rights violations.

Rabbi Yisroel Dovid Weiss, from Neturei-Karta, a group of Orthodox Jews who oppose Zionism and dispossessing the Palestinians from their land and homes, spoke at the rally. The group is persecuted in Israel.

The Zionist occupation is simply a political, selfish, unjust movement and has to be removed. If it is removed, we can once again live together as we have for hundreds and hundreds of years, in peace as brothers and sisters. — Rabbi Yisroel Dovid Weiss

“Because we are Jewish, and stand by our religion, we oppose entirely the existence of the Zionist state of Israel,” Weiss said to a roaring crowd, most of whom were local Arab community members.

“The Zionist occupation is simply a political, selfish, unjust movement and has to be removed,” Weiss added. “If it is removed, we can once again live together as we have for hundreds and hundreds of years, in peace as brothers and sisters.”

Father Halim Shukair of the Mother of the Savior Church in Dearborn also delivered comments.

“Palestine was the place that boasted Judaism, Christianity and Islam; we prayed together, from the same place, to that creator that created us in this beautiful image, with all of our diversity,” Shukair said.

In the days after her killing, occupation forces stormed the grounds and entered the Christian hospital that kept Abu Akleh’s body before her funeral in her native Jerusalem, to the outrage of the hospital’s leadership. Forces also attacked mourners and pallbearers carrying the iconic journalist’s casket.

Video: The Second Annual Metro Detroit March for Jerusalem Palestine, in Dearborn, May 15

U.S. Rep. Rashida Talib (D-Detroit), the daughter of Palestinian immigrants who has previously been denied entry by Israeli authorities to occupied Palestinian territories, where her grandmother resides, gave remarks.

The Arab American News was one of the organizers of the rally.

“No one can defeat the will of the those determined to liberate themselves,” said Publisher Osama Siblani. “History is on our side, not on their side… so you need to stand up and be proud and don’t let those (Middle Eastern states) who are normalizing (with Israel) make you (feel) defeated. To the contrary, stand up and tell them ‘what you have done is shameful.'”