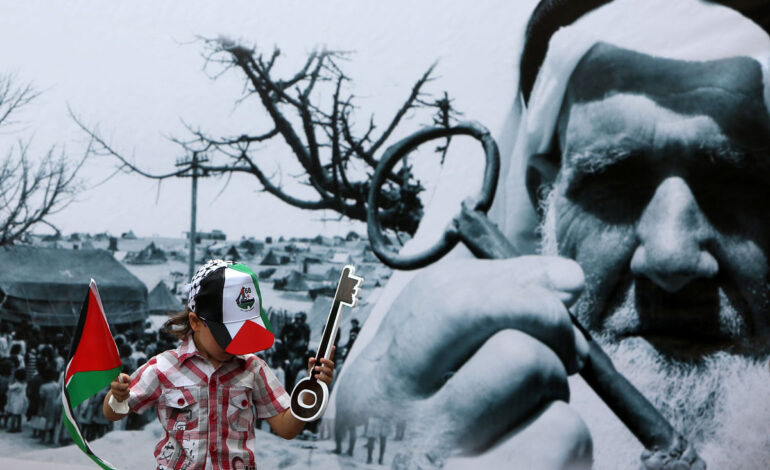 A Palestinian boy holds a large key and waves the Palestinian flag in front of a poster during a rally to commemorate the 68th anniversary of the "Nakba" on May 15, 2016 in the West Bank city of Nablus. The key symbolises the homes left by Palestinians in 1948. Photo: Jaafar Ashtiyeh/AFP

The Nakba is back on the Palestinian agenda.

For nearly three decades, Palestinians were told that the Nakba — or Catastrophe — is a thing of the past. That real peace requires compromises and sacrifices, therefore, the original sin that has led to the destruction of their historic homeland should be entirely removed from any “pragmatic” political discourse. They were urged to move on.

The consequences of that shift in narrative were dire. Disowning the Nakba, the single most important event that shaped modern Palestinian history, has resulted in more than political division between the so-called radicals and the supposedly peace-loving pragmatists, the likes of Mahmoud Abbas and his Palestinian Authority. It also divided Palestinian communities in Palestine and across the world around political, ideological and class lines.

Following the signing of the Oslo Accords in 1993, it became clear that the Palestinian struggle for freedom was being entirely redefined and reframed. It was no longer a Palestinian fight against Zionism and Israeli settler colonialism that goes back to the start of the 20th century, but a “conflict” between two equal parties, with equally legitimate territorial claims that can only be resolved through “painful concessions.”

The first of such concessions was relegating the core issue of the “Right of Return” for Palestinian refugees who were driven out of their villages and cities in 1947-48. That Palestinian Nakba paved the way for Israel’s “independence”, which was declared atop the rubble and smoke of nearly 500 destroyed and burnt Palestinian villages and towns. 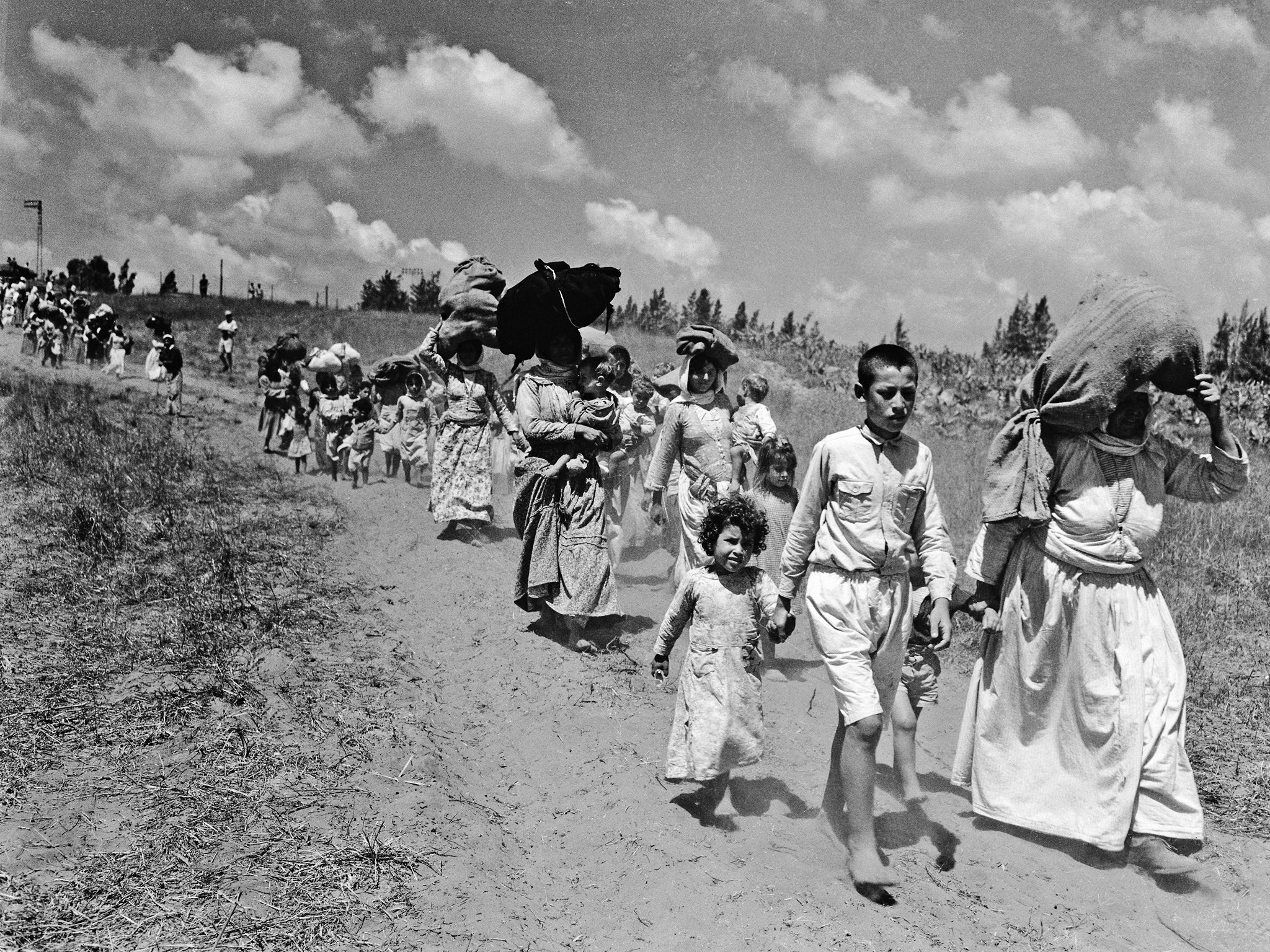 Palestinians driven from their homes in May 15, 1948, a day known as the Nakba catastrophe. File photo

That Palestinian Nakba paved the way for Israel’s “independence”, which was declared atop the rubble and smoke of nearly 500 destroyed and burnt Palestinian villages and towns.

At the start of the “peace process”, Israel was asked to honor the Right of Return for Palestinians, although symbolically. Israel refused. Palestinians were then pushed to relegate that fundamental issue to a “final status negotiations”, which never took place. This meant that millions of Palestinian refugees — many of whom are still living in refugee camps in Lebanon, Syria and Jordan, as well as the occupied Palestinian territories — were dropped from the political conversation altogether.

If it were not for the continued social and cultural activities of the refugees themselves, insisting on their rights and teaching their children to do the same, such terms as the Nakba and Right of Return would have been completely dropped out of the Palestinian political lexicon.

While some Palestinians rejected the marginalization of the refugees, insisting that the subject is a political not merely a humanitarian one, others were willing to move on as if this right was of no consequence. Various Palestinian officials affiliated with the now defunct “peace process” have made it clear that the Right of Return was no longer a Palestinian priority. But none came even close to the way that PA President Abbas, himself, framed the Palestinian position in a 2012 interview with Israeli Channel 2.

“Palestine now for me is the ’67 borders, with East Jerusalem as its capital. This is now and forever… This is Palestine for me. I am [a] refugee, but I am living in Ramallah,” he said.

Abbas had it completely wrong, of course. Whether he wished to exercise his right of return or not, that right, according to United Nations General Assembly Resolution 194, is simply “inalienable”, meaning that neither Israel, nor the Palestinians themselves, can deny or forfeit it.

Let alone the lack of intellectual integrity of separating the tragic reality of the present from its main root cause, Abbas lacked political wisdom as well. With his “peace process” floundering, and with the lack of any tangible political solution, he simply decided to abandon millions of refugees, denying them the very hope of having their homes, land or dignity restored.

Since then, Israel, along with the United States, has fought Palestinians on two different fronts: One, through denying them any political horizon and, the other, by attempting to dismantle their historically enshrined rights, mainly their Right of Return. Washington’s war on the Palestinian refugees’ agency, UNRWA, falls under the latter category as the aim was — and remains — the destruction of the very legal and humanitarian infrastructures that allow Palestinian refugees to see themselves as a collective of people seeking repatriation, reparations and justice.

Yet, all such efforts continue to fail. Far more important than Abbas’ personal concessions to Israel, UNRWA’s ever-shrinking budget or the failure of the international community to restore Palestinian rights, is the fact that the Palestinian people are, once again, unifying around the Nakba anniversary, thus insisting on the Right of Return for the seven million refugees in Palestine and the shattat — Diaspora. 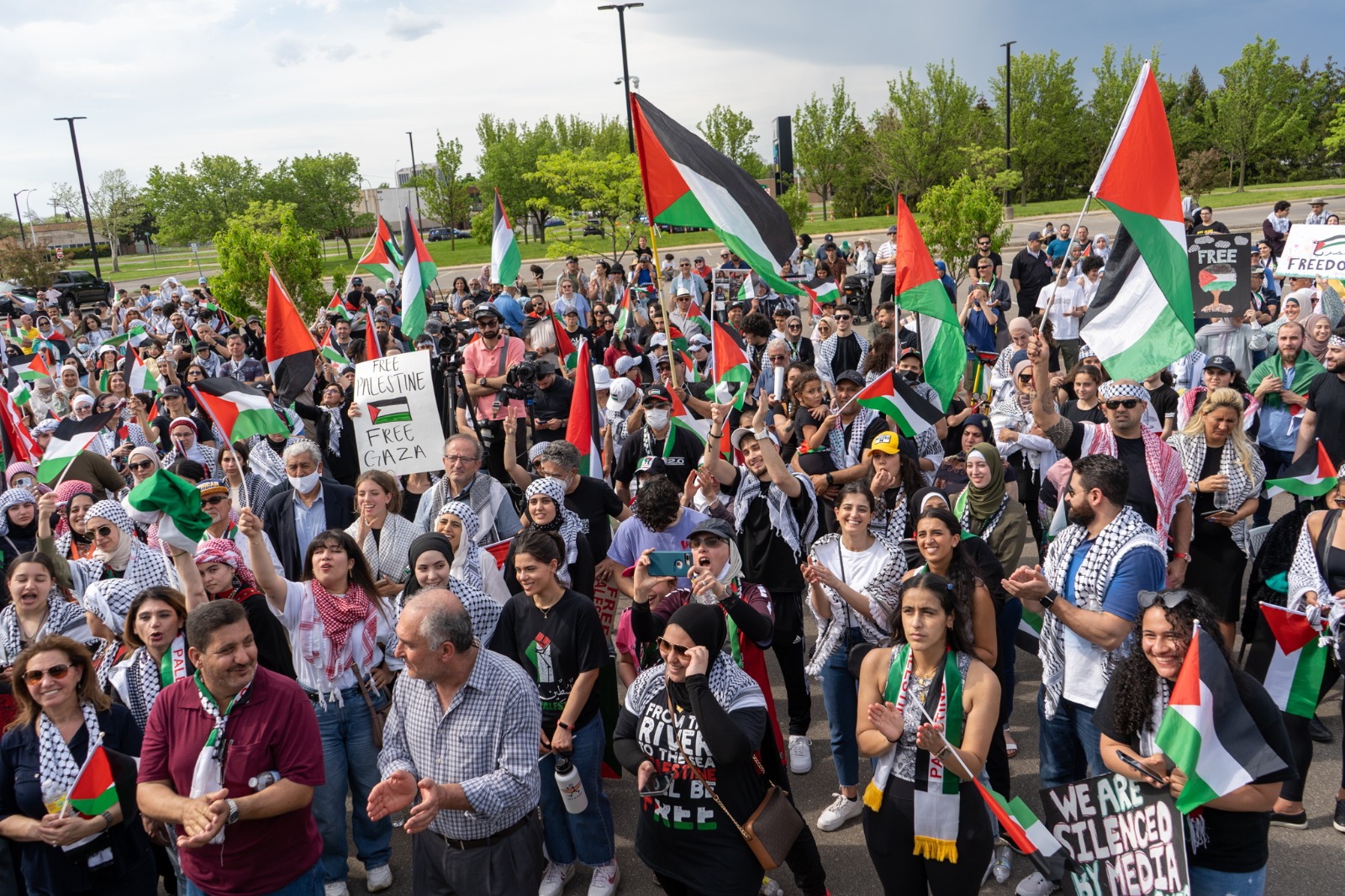 Far more important than Abbas’ personal concessions to Israel, UNRWA’s ever-shrinking budget or the failure of the international community to restore Palestinian rights, is the fact that the Palestinian people are, once again, unifying around the Nakba anniversary.

Ironically, it was Israel that has unwittingly re-unified Palestinians around the Nakba. By refusing to concede an inch of Palestine, let alone allow Palestinians to claim any victory, a state of their own — demilitarized or otherwise — or allow a single refugee to go home, Palestinians were forced to abandon Oslo and its numerous illusions. The once popular argument that the Right of Return was simply “impractical” no longer matters, neither to ordinary Palestinians nor to their intellectual or political elites.

In political logic, for something to be impossible, an alternative would have to be attainable. However, with Palestinian reality worsening under the deepening system of Israeli settler colonialism and apartheid, Palestinians now understand that they have no possible alternative but their unity, their resistance and the return to the fundamentals of their struggle. The Unity Intifada of last May was a culmination of this new realization. Moreover, the Nakba anniversary commemoration rallies and events throughout historic Palestine and the world on May 15 have further helped crystallize the new discourse that the Nakba is no longer symbolic and the Right of Return is the collective, core demand of most Palestinians.

Israel is now an apartheid state in the real meaning of the word. Israeli apartheid, like any such system of racial separation, aims at protecting the gains of nearly 74 years of unhinged colonialism, land theft and military dominance. Palestinians, whether in Haifa, Gaza or Jerusalem, now fully understand this and are increasingly fighting back as one nation.

And since the Nakba and the subsequent ethnic cleansing of Palestinian refugees are the common denominator behind all Palestinian suffering, the term and its underpinnings are back at center stage of any meaningful conversation on Palestine, as should have always been the case.