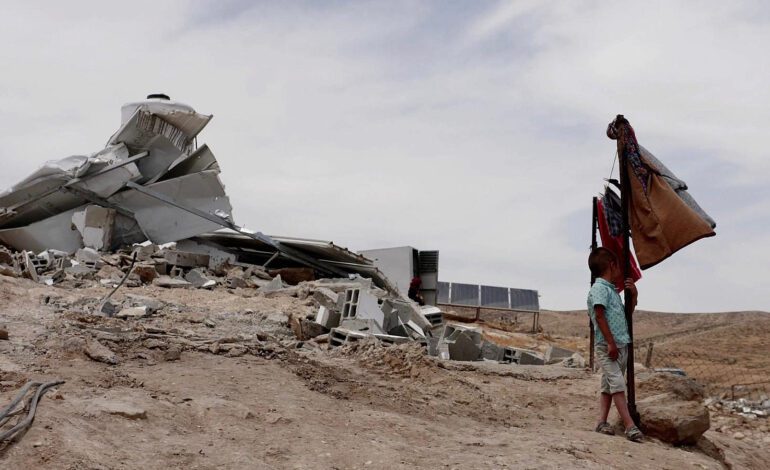 A child stands among the ruins of a house that was demolished by Israel in Al-Mirkez, Masafer Yatta, occupied West Bank, May 11, 2022. Photo: Rachel Shor

The Israeli Supreme Court has decided that the Palestinian region of Masafer Yatta, located in the southern hills of Hebron, is to be entirely appropriated by the Israeli military and that a population of over 1,000 Palestinians is to be expelled.

The Israeli Court decision, on May 4, was hardly shocking. Israel’s military occupation does not only consist of soldiers with guns, but elaborate political, military, economic and legal structures, dedicated to the expansion of the illegal Jewish settlements and the slow — and sometimes not-so-slow — expulsion of the Palestinians.

However, Masafer Yatta is particularly unique. In the case of occupied East Jerusalem, for example, Israel has made a fallacious, ahistorical claim that Jerusalem is the eternal and undivided capital of the Jewish people. It combined its unsubstantiated narrative with military action on the ground, followed by a systematic process that aimed at increasing the Jewish population and ejecting the original native inhabitants of the city. Such notions as “Greater Jerusalem” and legal and political structures, like that of the Jerusalem Master Plan 2000, have all contribute towards turning the once absolute Palestinian majority in Jerusalem into a shrinking minority.

With the Naqab, Israel’s similar objectives were put into motion as early as 1948, and again in 1951. This process of ethnically cleansing the natives remains in effect to this day.

Though Masafer Yatta is part of the same colonial designs, its uniqueness stems from the fact that it is situated in Area C of the occupied West Bank.

In July 2020, Israel purportedly decided to postpone its plans to annex nearly 40 percent of the West Bank, perhaps fearing a Palestinian rebellion and unwanted international condemnation. However, the plan continued in practice.

Moreover, a wholesome annexation of West Bank regions would mean that Israel would become responsible for the welfare of entire Palestinian communities. As a settler-colonial state, Israel wants the land, but not the people. In Tel Aviv’s calculation, annexation without the expulsion of the population could lead to a demographic nightmare; thus, Israel’s need to reinvent its annexation plan.

Though Israel has supposedly delayed the de jure annexation, it continued with a de facto form of annexation, one that has generated little international media attention. 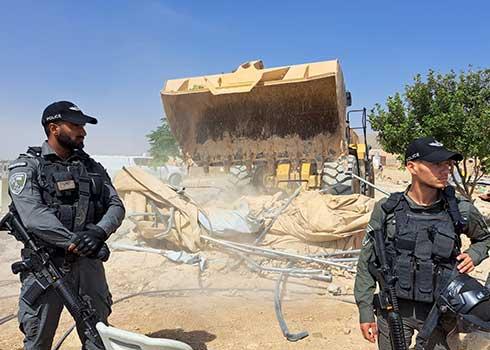 Demolition of one of the structures in al-Fakhit community, Masafer Yatta, June 1, 2022. Photo: Nasser Nawaj’ah/B’Tselem

The Palestinian villagers of Masafer Yatta and their legal representation know very well that no real “justice” can be obtained from the Israeli court system.

The Israeli Court’s decision regarding Masafer Yatta, which is already being carried out with the expulsion of the Najjar family on May 11, is an important step towards the annexation of Area C.  If Israel can evict the residents of 12 villages, with a population of over 1,000 Palestinians, unhindered, more such expulsions are anticipated, not only south of Hebron, but throughout the occupied Palestinian territories.

The Palestinian villagers of Masafer Yatta and their legal representation know very well that no real “justice” can be obtained from the Israeli court system. They continue to fight the legal war, anyway, in the hope that a combination of factors, including solidarity in Palestine and pressure from the outside, can ultimately succeed in compelling Israel to delay its planned destruction and Judaization of the whole region.

However, it seems that Palestinian efforts, which have been underway since 1997, are failing. The Israeli Supreme Court decision is predicated on the erroneous and utterly bizarre notion that the Palestinians of that area could not demonstrate that they belonged there prior to 1980, when the Israeli government decided to turn the area into “Firing Zone 918.”

Sadly, the Palestinian defense was partly based on documents from the Jordanian era and official United Nations records that reported on Israeli attacks on several Masafer Yatta villages in 1966. The Jordanian government, which administered the West Bank until 1967, compensated some of the residents for the loss of their “stone houses” — not tents — animals and other properties that were destroyed by the Israeli military. Palestinians tried to use this evidence to show that they have existed, not as nomadic people but as rooted communities. This was unconvincing to the Israeli court, which favored the military’s argument over the rights of the native population.

Now that the Israeli military has managed to acquire Masafer Yatta — a region spanning 32 to 56 sq km — based on completely flimsy excuses, it will become much easier in ensuring the ethnic cleansing of many similar communities in various parts of occupied Palestine.

While discussions and media coverage of Israel’s annexation scheme in the West Bank and the Jordan Valley have largely subsided, Israel is now preparing for a gradual annexation scheme. Instead of annexing 40 percent of the West Bank all at once, Israel is now annexing smaller tracts of land and regions, like Masafer Yatta, separately. Tel Aviv will eventually connect all these annexed areas through Jewish-only bypass roads to larger Jewish settlement infrastructures in the West Bank.

Not only does this alternative strategy allow Israel to avoid international criticism, it will also permit Israel to eventually annex Palestinian land while incrementally expelling Palestinians, helping Tel Aviv prevent demographic imbalances before they occur.

What is happening in Masafer Yatta is not only the largest ethnic cleansing scheme to be carried out by Israel since 1967, but the move should be considered a first step in a much larger scheme of illegal land appropriation, ethnic cleansing and official mass annexation.

Israel must not succeed in Masafer Yatta, because if it does, its original, mass annexation scheme will become a reality in no time.