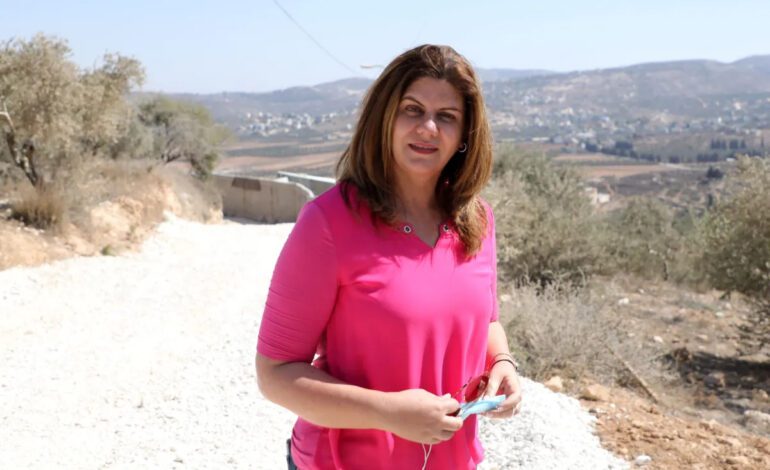 A U.N. investigation has revealed that the shots that killed renowned Palestinian American journalist Shireen Abu Akleh and injured her colleagues in the Occupied West Bank in May came from Israeli forces.

The U.N. Human Rights Office made the announcement on June 24.

The conclusion also refutes Israel’s claim that the shots came from earlier indiscriminate firing by Palestinians fighters in the Jenin refugee camp. Abu Akleh and her colleagues were covering a raid on a house by Israeli occupation forces when she was shot in the head.

Reports and eyewitnesses said there were no Palestinian fighters in the area and that shots came from Israeli forces. Though Israel initially denied involvement, it later conceded after multiple independent investigations that the bullet may have come from one of its soldiers.

The bullet retrieved from Abu Akleh was later determined to be a U.S.-made, green-tipped 5.56mm caliber bullet. This bullet, designed to pierce armor, is used in an M4 rifle, routinely carried by Israeli forces, Al Jazeera, the news agency Abu Akleh worked for, revealed last week.

At her funeral, Israeli officers attacked pallbearers, which caused them to momentarily drop her coffin, an incident that caused international outrage. Despite finding that there had been police misconduct, Israel has said officers should not be punished.

The bullet recovered from the journalist’s body has not been handed over to Israel, which says it wants to conduct a joint investigation with Palestinian authorities and has claimed that Palestinians are impeding such an investigation. Palestinians have pointed to a history of egregious war crimes by Israeli forces, noted by international monitors, without any real investigations, prosecutions or acknowledgment from Israeli authorities.

Here is the full announcement by the U.N. Human Rights Office:

More than six weeks after the killing of journalist Shireen Abu Akleh and injury of her colleague Ali Sammoudi in Jenin on 11 May, 2022, it is deeply disturbing that Israeli authorities have not conducted a criminal investigation.

We at the U.N. Human Rights Office have concluded our independent monitoring into the incident. All information we have gathered – including official information from the Israeli military and the Palestinian Attorney-General – is consistent with the finding that the shots that killed Abu Akleh and injured her colleague Ali Sammoudi came from Israeli Security Forces and not from indiscriminate firing by armed Palestinians, as initially claimed by Israeli authorities. We have found no information suggesting that there was activity by armed Palestinians in the immediate vicinity of the journalists.

According to our findings, on 11 May, 2022, soon after 06h00, seven journalists, including Shireen Abu Akleh, arrived at the western entrance of the Jenin refugee camp in the northern occupied West Bank to cover an ongoing arrest operation by Israeli Security Forces and the ensuing clashes. The journalists said they chose a side street for their approach to avoid the location of armed Palestinians inside the camp and that they proceeded slowly in order to make their presence visible to the Israeli forces deployed down the street. Our findings indicate that no warnings were issued and no shooting was taking place at that time and at that location.

At around 06h30, as four of the journalists turned into the street leading to the camp, wearing bulletproof helmets and flak jackets with “PRESS” markings, several single, seemingly well-aimed bullets were fired towards them from the direction of the Israeli Security Forces. One single bullet injured Ali Sammoudi in the shoulder, another single bullet hit Abu Akleh in the head and killed her instantly. Several further single bullets were fired as an unarmed man attempted to approach Abu Akleh’s body and another uninjured journalist sheltering behind a tree. Shots continued to be fired as this individual eventually managed to carry away Abu Akleh’s body.

The U.N. High Commissioner for Human Rights Michelle Bachelet continues to urge Israeli authorities to open a criminal investigation into Abu Akleh’s killing and into all other killings and serious injuries by Israeli forces in the West Bank and in the context of law enforcement operations in Gaza. Since just the beginning of the year, our Office has verified that Israeli Security Forces have killed 58 Palestinians in the West Bank, including 13 children.

International human rights law requires prompt, thorough, transparent, independent and impartial investigation into all use of force resulting in death or serious injury. Perpetrators must be held to account.

The Israeli mission to the United Nations says the investigation’s results are invalid since the Palestinian Authority has not handed over the bullet that killed Abu Akleh to Israel’s own investigators.