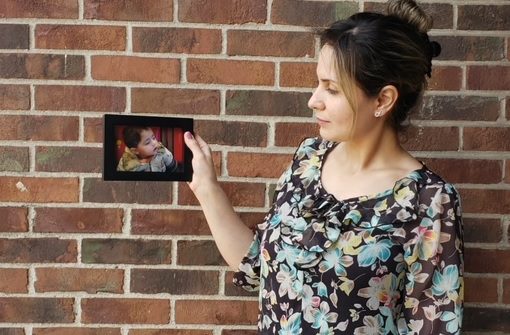 DEARBORN — Karim Khassouan lived a short, quiet life and his spirit will carry on in the lives he saved through the organs he donated.

Khassouan was born with Arteriovenous Malformation (AVM), a condition in which blood vessels become tangled, according to his mother, Nameer Alkurdi. It is normally treatable but, in Karim’s case, the tangled vessels were located near his brain stem. The condition left Karim non-verbal, but he was very expressive and loving, his mother said.

“He was so sweet; he was like an angel,” she said. “He was so quiet and calm and content. He looked at you with puppy dog eyes.”

Khassouan’s health deteriorated until July of 2021, when he was 10-years-old, hospitalized and on a ventilator. Alkurdi, a Dearborn resident, said she and her husband, Ahmed, decided to authorize organ donation. Ahmed was living overseas at the time, but she kept him informed about what was happening and said he was very encouraging and supportive of the decision.

“We wanted Karim’s death to mean something, for him to be able to help other people,” Alkurdi said. “We wanted to help. It took a lot of courage to make that decision.” 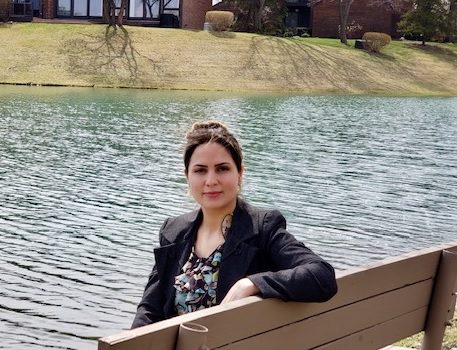 We wanted Karim’s death to mean something, for him to be able to help other people. We wanted to help. It took a lot of courage to make that decision. – Nameer Alkurdi

She said it wasn’t a popular decision, even among her own family. Her own parents were skeptical.  Not all practicing Muslims are supportive of organ and tissue donation, although in 2018 the Fiqh Council of North America issued a fataawah or fatwa addressing the question and considers organ donation and transplantation to be Islamically permissible, in principle.

“It was a very tough decision; I still think about it to this day,” she said.

She did, however, know someone who provided a living example of the kind of good that organ and tissue donation can do. Mustafa Sharafi, a friend of the family, needed a liver transplant when he was just a few months old – he was among the youngest ever to receive a liver transplant at the time. Now 36, Sharafi has a son of his own and is living life to the fullest.

“He really influenced my decision a lot,” Alkurdi said. “He’s thriving and he’s very grateful for his life. In the end I knew it was the right thing to do.”

Khassouan was able to donate one kidney and his lungs to save others. His liver was donated to research to help find a cure to a rare liver condition in Middle Eastern men.

Sharafi, a Sterling Heights resident and volunteer with Gift of Life Michigan, frequently talks about the importance of signing up as an organ and tissue donor and tries to break down the common misconceptions that exist among the Arab American population and other multicultural groups. He said he was humbled to know that his example has helped save lives and heal others.

“It just feels really good to do something good,” he said. “I enjoy spreading the word. I want to leave a legacy for my son.”

Alkurdi said she understands organ and tissue donation is a difficult topic in the Muslim community, but said she wants to do her part to break down some of the stigma attached to it or, at least, open a dialogue about the issue. It’s an important topic, particularly among multi-cultural communities. 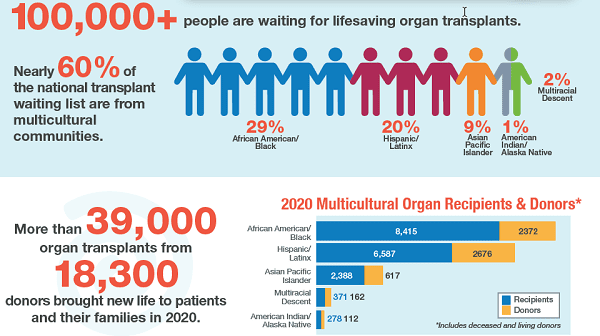 Alkurdi said she understands organ and tissue donation is a difficult topic in the Muslim community, but said she wants to do her part to break down some of the stigma attached to it or, at least, open a dialogue about the issue.

More than half the men, women and children waiting for a life-saving organ transplant are people of color, yet people in multi-cultural communities are more reluctant to sign up as donors. There are more than 100,000 people waiting for a new life-saving organ in the U.S. and more than 60 percent of them represent racial and ethnic minorities. In Michigan, there are about 2,400 people waiting; about half are of African American, Latinx or Arab American descent.

August is National Minority Donor Awareness Month, which seeks to change those statistics by promoting the need for multicultural people to sign up on the Organ donor Registry, educating the public about the benefits of donation and celebrating the stories of donors, donor families and transplant recipients.

“We need to talk about it,” she said. “You’re doing the most honorable thing in the world. You’re giving life to someone.”

— This article was contributed by Gift of Life Michigan exclusive to The Arab American News. It has been edited for style.