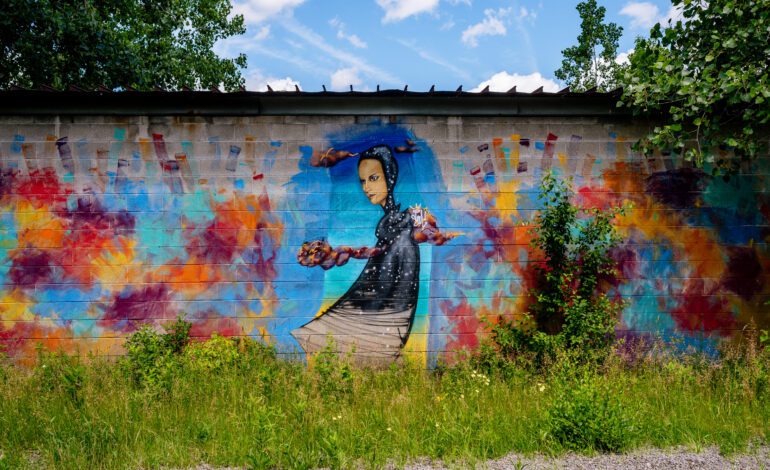 A mural at Bieniek Park. Photo by Nick Hagen

Until recently, Bieniek Park and Dingeman Park in Southwest Detroit’s Chadsey Condon neighborhood were often referred to as “ghost parks”, abandoned recreation areas that have fallen by the wayside.

Ethelyn Carroll, a Southwest Detroiter and president of the area’s United Block Club Council, remembers how bad things had become at the two parks a few years ago.

“The grass was not cut,” she said. “Weeds, rocks, dirt, tires. No fencing or boundaries. Nothing there. Nothing the kids could play on. It was just vacant open space.”

Detroit stopped maintaining Bieniek Park, located at the intersection of Kirkwood Street and Braden Street, during a period following the city’s 2013 bankruptcy. Dingeman Park, which is adjacent to Munger Elementary and Middle School, fell into disrepair after the city sold it to the Detroit Public School District (now the Detroit Public Schools Community District) in the early 2010s.

However, things have improved for the recreation areas over the last few years. Friends groups have adopted both parks, the grass is being mowed and the city of Detroit is maintaining Bieniek Park again. Dingeman still suffers from overgrown weeds, and there’s a lack of functioning play equipment for children at both sites, but work is underway to improve the locations.

In collaboration with other neighborhood groups and residents, Bridging Communities, a nonprofit that serves Chadsey Condon, is also working to install a new greenway that will connect the two sites. And the project now features a new pocket park that opened in June.

Caroll, who says the neighborhood suffers from a lack of quality recreation areas, is looking forward to seeing the project realized.

“I’ve been down to the Dequindre Cut and I think a greenway is a wonderful way to connect all our neighborhoods,” she said. “I’ve seen a lot of progress, so I think it’s going to be great.” 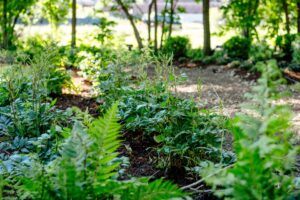 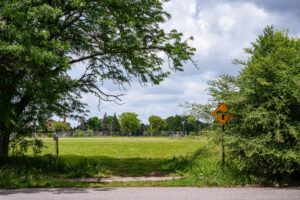 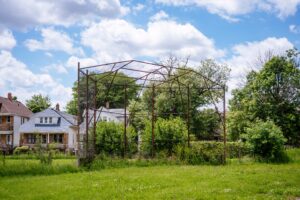 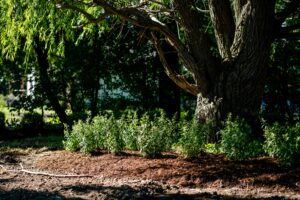 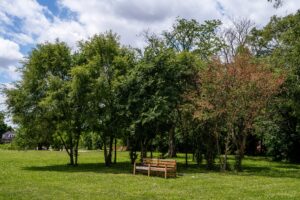 A bench at Bieniek Park

Path to a greenway

The effort to install the new greenway and pocket park grew out of Chadsey Condon’s 2019 development plan, a vision for the neighborhood facilitated by Community Development Advocates of Detroit (CDAD). Bridging Communities, a CDAD member organization, created the plan with residents and other local stakeholders through a variety of participatory community meetings, focus groups and surveys. Issues related to public space emerged as one of the top three concerns identified during the planning process.

“One of the [top priorities] was looking at activating more open space and creating opportunities for recreation throughout the community,” said Dan Commer, Bridging Communities Neighborhood Stabilization manager. “This was really important, because the nearest rec center for this community is more than 2.7 miles away, which is Patton Park.”

This lack of options was of particular concern to parents, as the multicultural neighborhood is home to a relatively high concentration of children and youth. Blight was also a motivator in getting the greenway project going, according to Phyllis Edwards, Bridging Communities’ outgoing executive director.

“People were doing illegal dumping back where [Dingeman] Park is,” she said. “And so we tried to find out a way how we could repurpose a vacated alley [and] do something with the green space to stop some of the blight.” 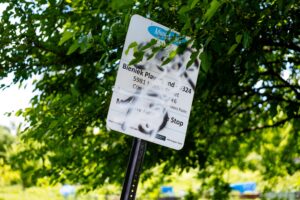 The sign at Bieniek Park has seen better days 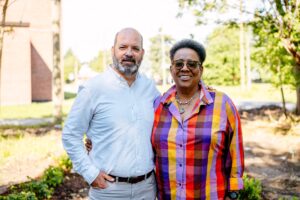 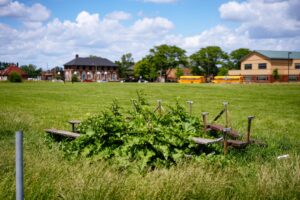 Working with other residents and community groups, like Advocates for Dingeman Park, Bridging Communities became involved with efforts to clean up the recreation spots and the surrounding community. It also applied for and was approved a $150,000 Kresge Innovative Projects: Detroit (KIP:D) planning and implementation grant to begin developing the greenway as well as a $10,000 Local Initiatives Support Corporation (LISC) planning grant through ESPN RePlay.

While the details of the pathway are still being hashed out, the roughly quarter-mile pathway will eventually connect the two Chadsey Condon parks via a vacant alley running parallel to Braden Street. And, as fate would have it, the first phase and gateway Park for the highly anticipated Joe Louis Greenway is being built off of Warren Avenue about a quarter mile from Bieniek Park.

A pocket park for Chadsey Condon

While the Braden Street Greenway isn’t expected to be completed until December 2023, the new pocket park opened in June.

A small ribbon-cutting ceremony for the new pocket park was held on June 23. A larger public gathering celebrating the service of outgoing Bridging Communities Director Phyllis Edwards was held the following day, June 24, from 3 to 6 p.m.

The roughly one-acre park, which has yet to be named, will be located at the midpoint of the trail at 5697 Braden Street. Bridging Communities secured land for the pocket park through a maintenance agreement with the Detroit Land Bank. Planning for the new park began about a year ago and was overseen by Ujujji Davis Williams of JIMA Studio, a Black-owned landscape architecture firm based in Detroit.

Beyond the greenway and pocket park, there is some other good news on the horizon.  Detroit Parks & Recreation is planning on kicking off a community engagement process for renovations to Bieniek park in the next few months. Bridging Communities is also looking into the possibility of bringing a mini-pitch soccer field and basketball court to Dingeman Park. For Commer, these and the other developments are a wonderful example of the change a local nonprofit can bring about by collaborating with others in its community.

“We’re trying to demonstrate that in a Detroit neighborhood that’s not part of the Strategic Neighborhood Fund that had been overlooked — with parks that were not cared for — has been so resilient that we’ve actually created community spaces that are comparable to what you might find along the RiverWalk.”

– Resilient Neighborhoods is a reporting and engagement series that examines how Detroit residents and community development organizations are working together to strengthen local neighborhoods. This story was originally produced and published by Model D Media and is reprinted in New Michigan Media newspapers through a partnership supported by the Kresge Foundation.

– All photos by Nick Hagen 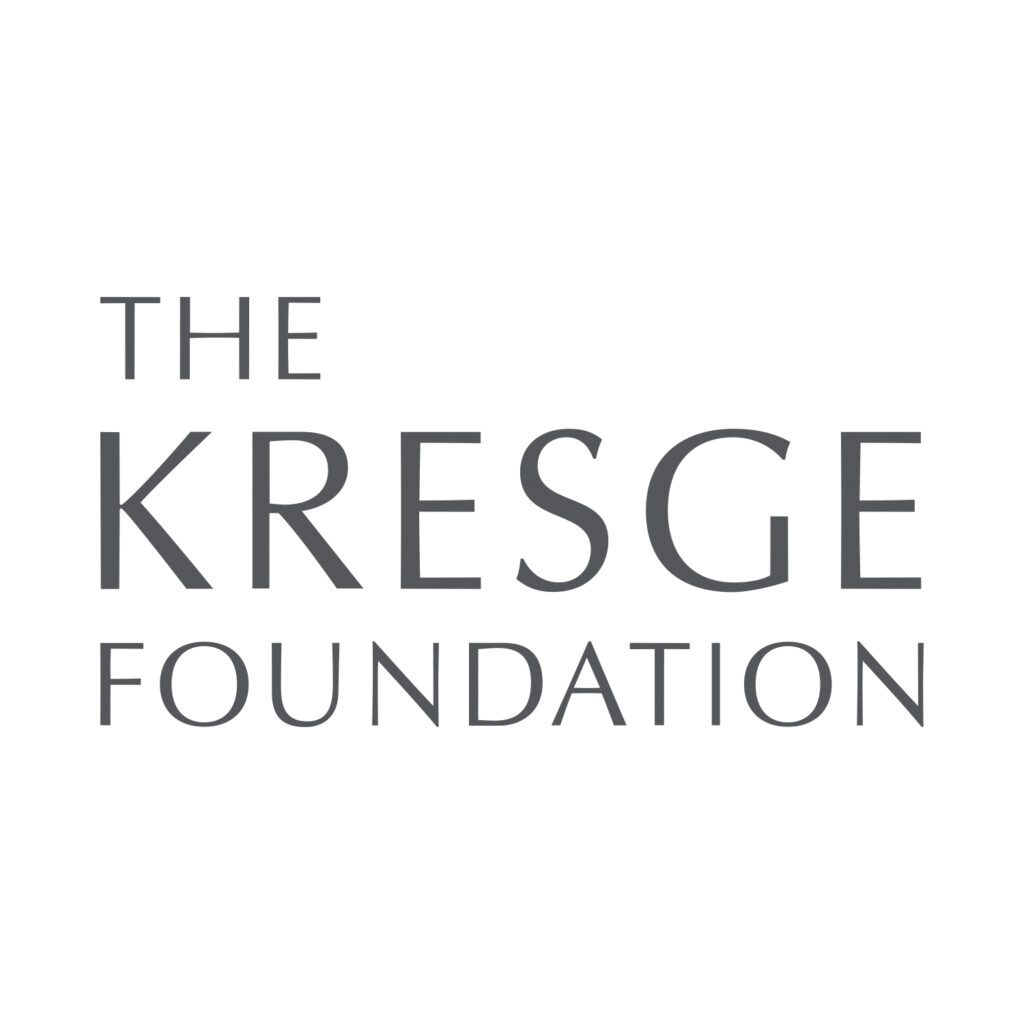