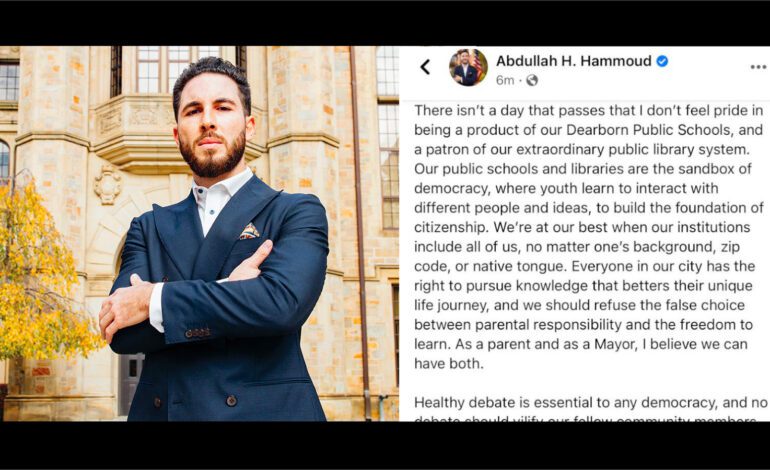 DEARBORN — Tensions over calls to remove a number of books in Dearborn Public Schools libraries continued this week, with the city’s mayor chiming in and receiving both praise and anger over his comments. (An interview with Mayor Hammoud appears below.)

The school district restricted access to seven books after demands from some parents and community members who objected to their explicit content. The district says it is evaluating the titles “to ensure they are age appropriate and if the content is being presented in an appropriate context.”

Details are forthcoming on the review process, including information about the make-up of a book review committee, from the district. The district has made clear in the meantime that it has not banned any books and is simply evaluating the titles in questions and more.

As The Arab American News reported last week, what (at most, generally) ties the books together  is their interrogation of and engagement with questions and topics of gender and sexuality, specifically though queer perspectives.

Some explicitly so, such  as the sex education book oriented towards LGBTQ+ youth, This Book is Gay, available to high school students. But other books in the list, like the popular title The Lovely Bones, which was also adapted for the big screen by Peter Jackson, simply contain depictions of sexual violence.

Students have access to thousands of ebooks through the library database.

The outrage around the books was matched by outrage over calls for banning the titles, with many parents — Arab American and otherwise — speaking on the dangers of banning books and restricted freedom of information and education.

The controversy spilled onto the public square last weekend, with two rallies held outside the Henry Ford Centennial Library, one conveying support for the LGBTQ+ community and against banning of books, and a second that stood against sexually explicit books and materials.

As the Detroit Free Press reported, some who attended the protest expressed anti-LGBTQ+ views. Indeed, some Facebook posts decried of a “homosexual agenda” being pushed in schools.

But other participants at the second rally and community members at School Board meetings have insisted their objection is simply on the graphic content of the books. 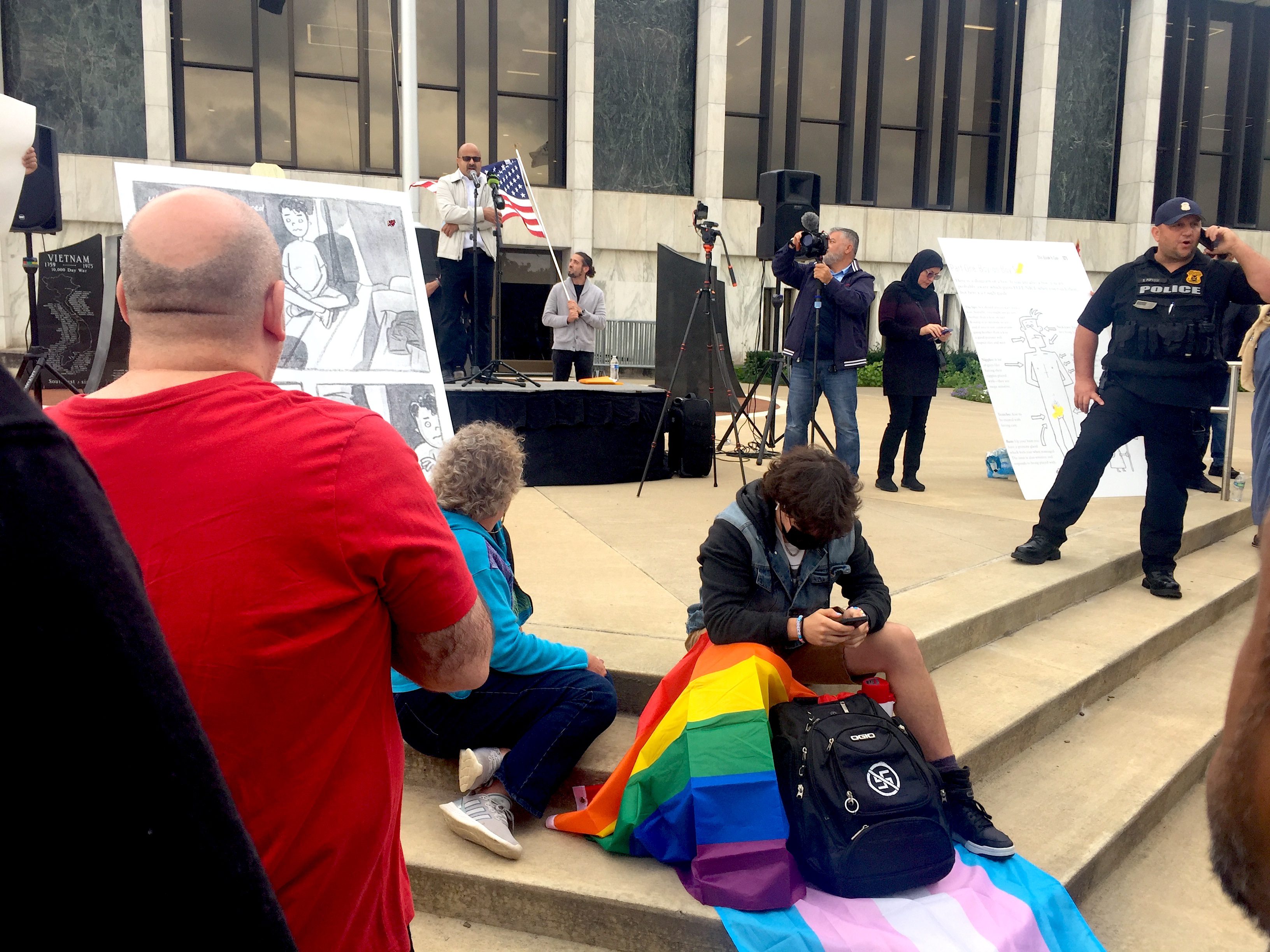 Sam Smalley sits on the steps in front of the Henry Ford Centennial Library with a pride flag to counter an ongoing protest against certain books in the Dearborn Public Schools library system, Sept. 25. Photo: The Arab American News

The office of Mayor Abdullah Hammoud received questions from residents, organizations and the media about his administration’s stance on the public city libraries, perhaps due to the location of the rallies last weekend.

The city’s libraries are separate from school libraries, the latter being under the supervision of the district’s administration.

Hammoud took to social media on Tuesday to praise Dearborn schools, which he attended, and the city’s public library system. He also said, “public schools and libraries are the sandbox of democracy, where youth learn to interact with different people and ideas.

“Everyone in our city has the right to pursue knowledge that betters their unique life journey, and we should refuse the false choice between parental responsibility and the freedom to learn,” Hammoud said. “As a parent and as a mayor, I believe we can have both.”

The mayor touched on the need for healthy and respectable debate and how Dearborn is a welcoming community “that invites people from all walks of life to be unapologetically themselves.”

He said the national trend to restrict access to information are attempts to “limit our freedoms and it will not stop there,” that it was his responsibility to ensure children have the tools to create their own future.

“When it comes to our city’s libraries, for the sake of our children, no book will be removed off the shelves,” Hammoud concluded.

It’s my responsibility to ensure our children have the tools to create their own future. Our libraries serve as a gateway to knowledge, to imagination, and to possibility. When it comes to our city’s libraries, for the sake of our children, no book will be removed off the shelves pic.twitter.com/oEe9zocdGy

The full statement is available on the mayor’s social media pages.

The statement was met with hundreds of comments, many of which thanked Hammoud for his words, while others displayed shock and disappointment.

Hammoud responded to questions from The Arab American News on Thursday about his statement.

Q) Could you talk about what drove you to make a statement on the school district library issue? Have there been calls to ban books that extend out of the district and could potentially affect the city’s libraries?

There’s a difference between the school libraries and our public city libraries, which are Centennial, Esper and Bryant Branch. My statement pertained to these city libraries, as the schools are governed separately from my administration. Dearborn school officials and administrators are the leads for listening to parents’ concerns on the important issues of books in school libraries. These officials have established their own process to address issues in the schools.

When it comes to our city-administered libraries, countless people and organizations have raised their genuine concerns about issues happening in Dearborn and expect me to publicly address them. As mayor, that is my responsibility.

When it comes to our city-administered libraries, countless people and organizations have raised their genuine concerns about issues happening in Dearborn and expect me to publicly address them. As mayor, that is my responsibility. Prior to my statement on Tuesday, my office received several questions from residents, employees, major corporations, media, community groups and others. They wanted to know my administration’s stance on the public city libraries. Our city librarians have also reported an increased number of criticisms; and nationally, city libraries like ours have also been the subject of similar debates.

Federal law has established specific protections for municipal libraries and has recognized the right to receive information as a First Amendment protection. I believe these protections are important and that is why I took this stance in response to community concerns.

Q) What parallels do you see in how this issue has played out locally and the national conversation around censorship and libraries?

Locally, we have seen parents and residents make their voices heard. Parents are understandably concerned when it comes to issues about their children’s learning environment, and that’s why we’re seeing such interest on this issue. Ideally, this local conversation happens without being influenced by outside organizations who have an interest in dividing us. This is something we have observed nationally. I never want outside organizations who don’t know or care about our community to impose their agendas on our local democracy. These are the bad-faith actors I referenced, not the local parents and families who have honest concerns and fears about their children’s educational environment. 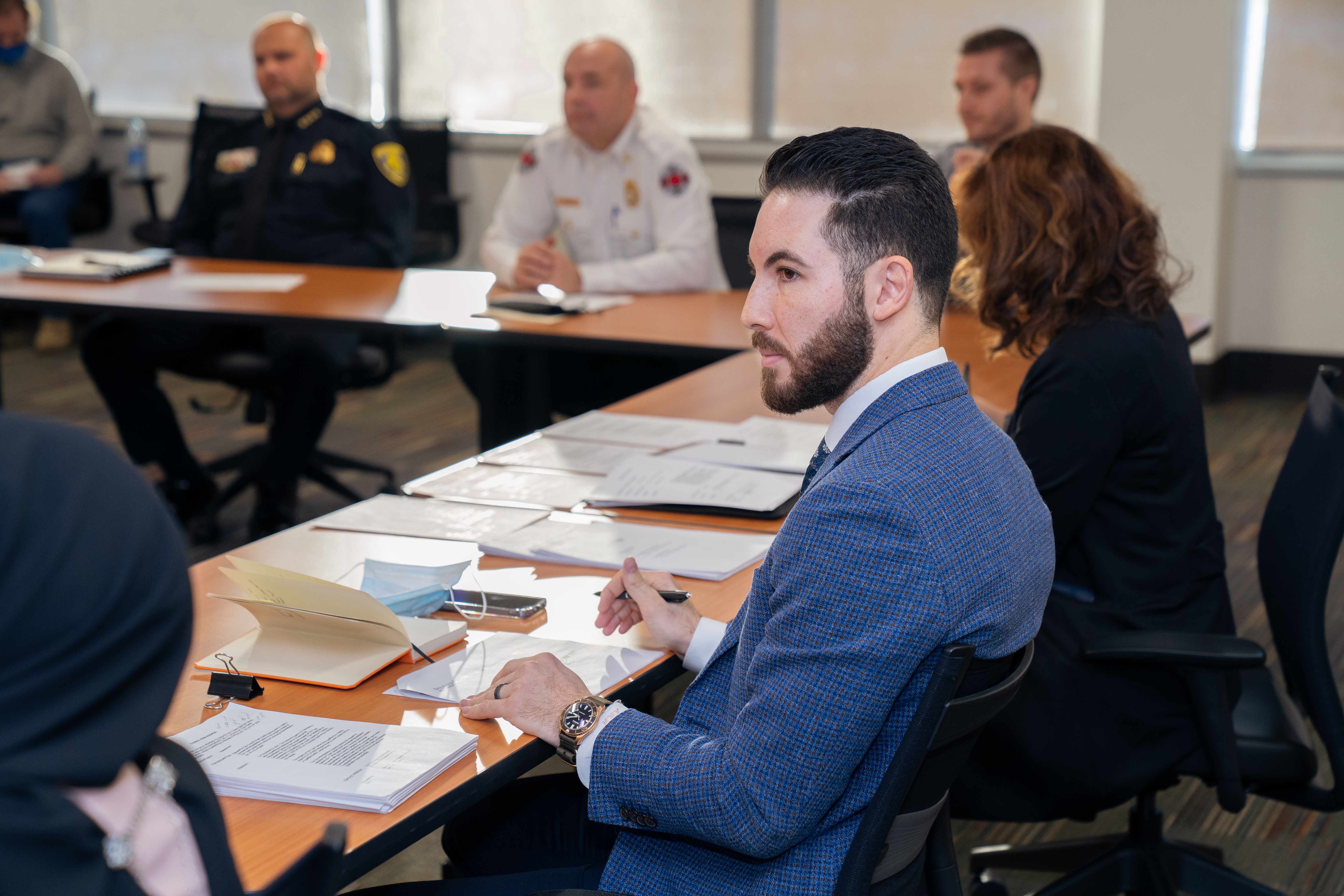 Q) Are there federal statutes, laws etc. that protect the curation, cataloging and hosting of texts and materials in a municipal library? Does Dearborn’s charter have provisions for the administration to step in if efforts to remove books from public libraries take shape?

Unlike school libraries and academic libraries, only public libraries such as Henry Ford Centennial Library are considered  “limited public forums.” The “limited” means that the public forum is created by the government for a particular purpose. In the case of public libraries, the purpose is to receive information. This means libraries must legally provide access to information for all. Librarians in our city libraries are not permitted to limit the choices of users, as that is considered a limitation on the right to receive information. Again, schools have a different set of standards and processes that they operate under.

To my knowledge, the city charter contains no such provision, in part because many of the legal guardrails I mentioned were established federally. Our Constitution and Bill of Rights promises every person the right and equal opportunity to discover, develop and defend their own political, social and religious beliefs, and the public library makes that promise real for every person.

Q) Finally, have you had time to reflect on the response to your statement from the community? Are there dimensions of this debate that the community should consider in this otherwise heated debate?

Absolutely. My original statement took a stance on our city-administered libraries and I recognize there’s confusion out there. As mayor, I have no say at our schools. We sought to clarify our stance on city-administered libraries in response to community concerns. Banning books is a slippery slope, as we have seen throughout history. That’s why Federal law has recognized the right to receive information as a First Amendment protection. I believe these protections exist for good reason.

There are real fears by parents on what is made available to their children. It is my hope that these are addressed using transparent and neutral processes that maintain a strong learning environment.

Whether it’s this issue or anything else, I aim to take a principled stance. But I do so humbly, recognizing the many perspectives we’re lucky to have in our city. I will always listen with sincere intent and an open mind.