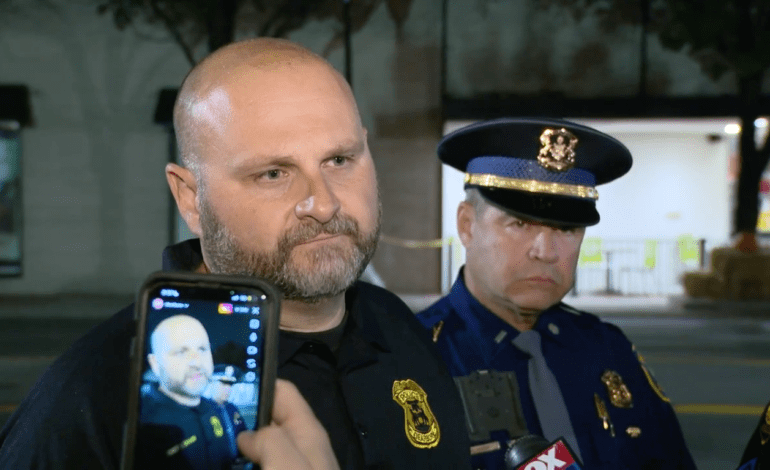 Dearborn Police Chief Issa Shahin speaks to reporters in Dearborn after the surrender of an active shooter in west Dearborn. Screenshot/FOX 2

DEARBORN — After seven hours of tense negotiations, a 38-year-old armed man surrendered himself to police, bringing a long ordeal to a close in downtown west Dearborn.

The city was rattled by reports of an active shooting at the Hampton Inn on Michigan Avenue Thursday afternoon.

Earlier the Dearborn Police Department told reporters that there was one victim who was transported to the hospital and that the shooter, carrying a long gun, was barricaded in his room and that negotiations were ongoing. Police later said that the situation began with a dispute with hotel staff around money.

Dearborn Police Chief Issa Shahin said Thursday night that the shooting victim was a 55-year-old clerk at the hotel, from Riverview, “who was just doing his job.” He was pronounced dead at the hospital. Police said the shooting happened on the third floor.

The Arab American News learned from sources inside the hotel that the victim was the manager and that both the shooter and the victim are African American.

Shahin said that though the gunman did not shoot at officers, he did threaten them several times.

Police said they became aware of the situation with calls of shots fired to their dispatch center around 1 p.m. Multiple law enforcement agencies soon swarmed the area to assist the Dearborn Police. 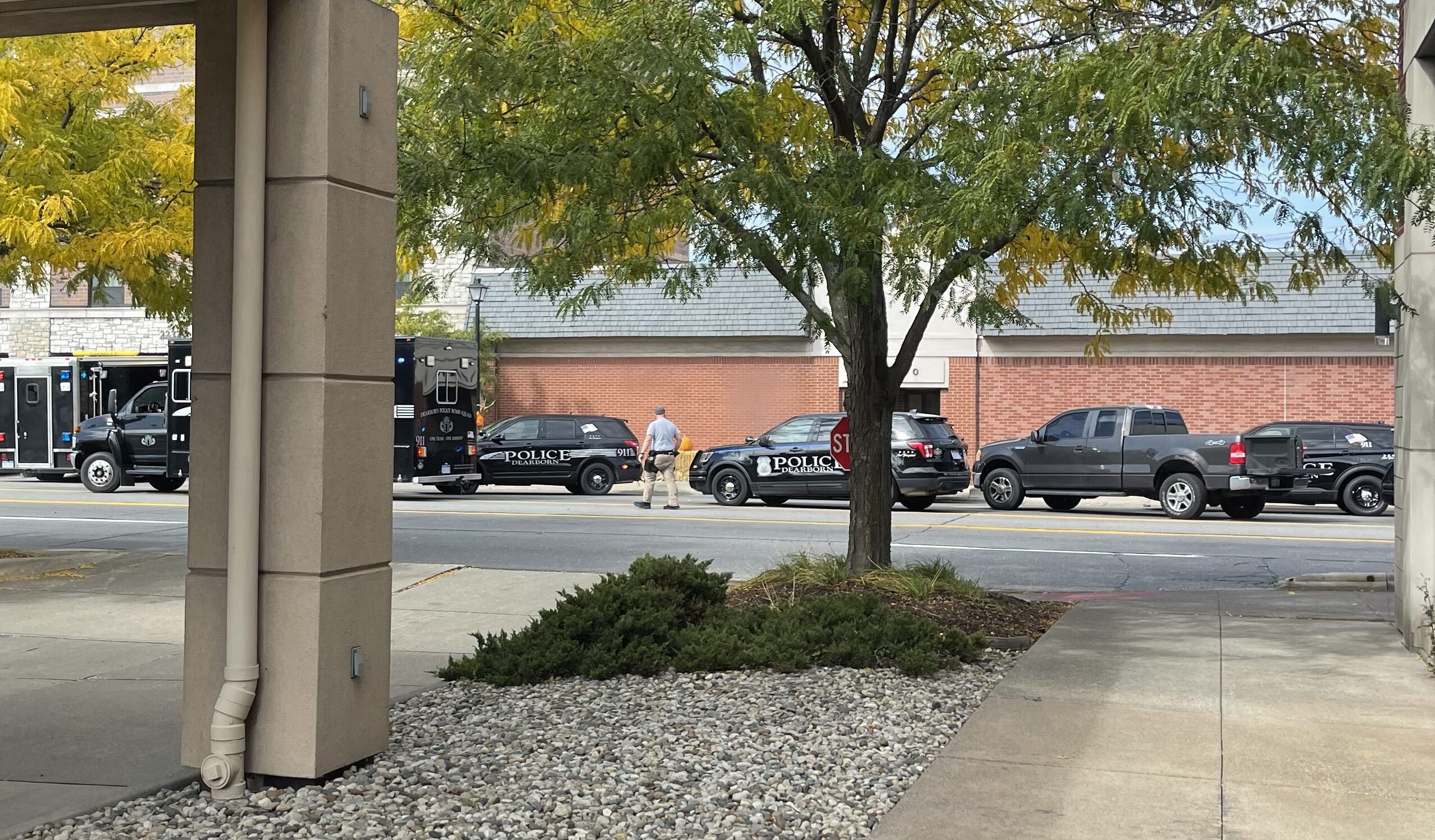 Michigan State Police troopers, who also assisted with aerial support, closed off all of downtown west Dearborn and continued to push people away from an extremely dangerous situation.

“Do not come down to downtown (west) Dearborn just to gawk; it’s not safe for you,” said Lt. Michael Shaw of the Michigan State Police.

Shahin was joined by Cpl. Dan Bartok, Shaw and Dearborn Mayor Abdullah Hammoud at a news conference just before 9 p.m. to announce the surrender.

Shahin said the shooting suspect had a history of mental illness and drug abuse.

“I’ve been a chief now for nine months and far too often we’re running into situations with people with mental illness that are armed with firearms, and the outcomes are often a tragedy,” Shahin said. “There’s a broader issue here then what’s happening in the city of Dearborn; the combination of mental illness and access to firearms.” 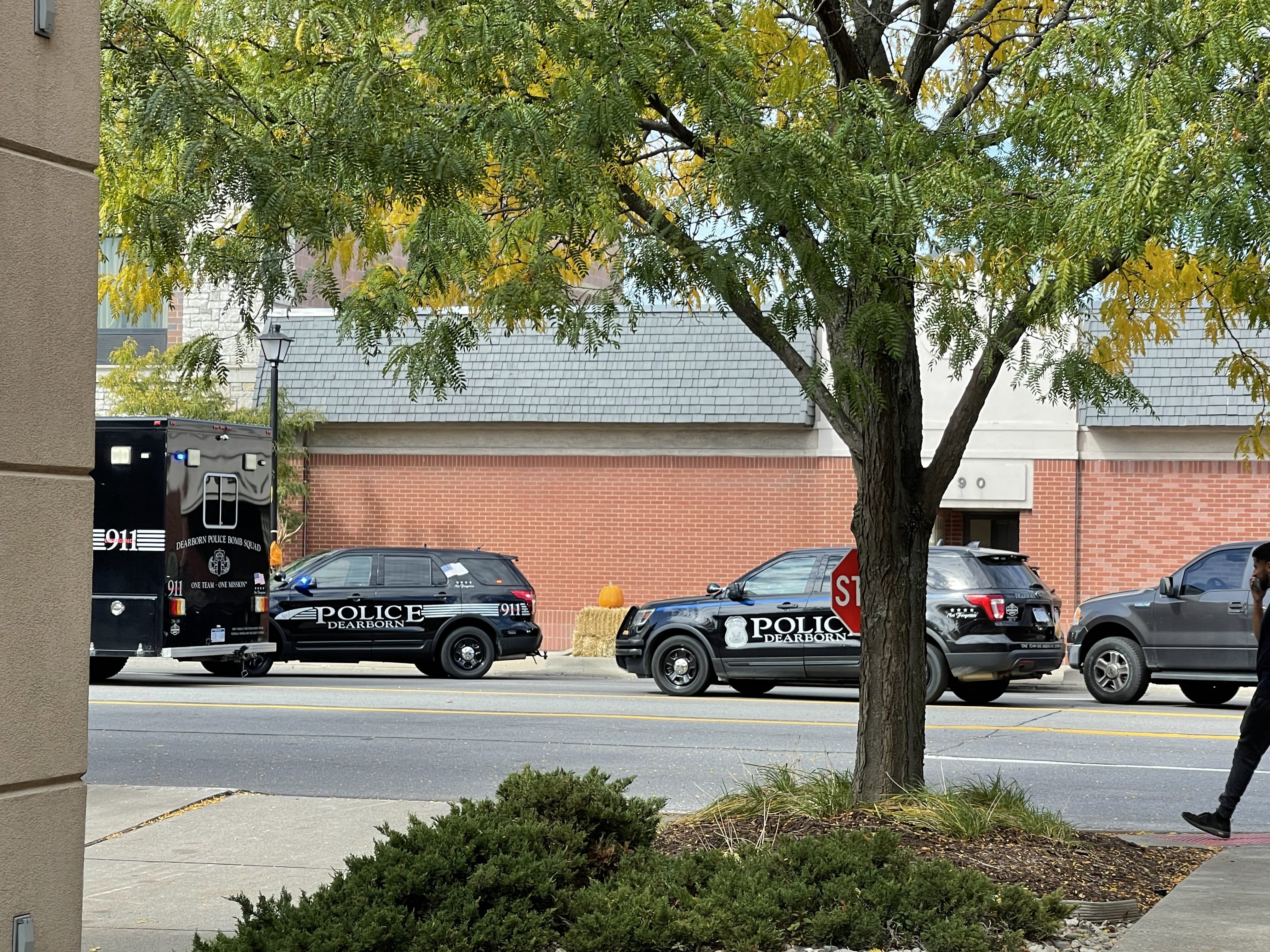 I’ve been a chief now for nine months and far too often we’re running into situations with people with mental illness that are armed with firearms, and the outcomes are often a tragedy. There’s a broader issue here then what’s happening in the city of Dearborn; the combination of mental illness and access to firearms. — Dearborn Police Chief Issa Shahin

Hammoud thanked Dearborn police, first responders and local law enforcement partners who helped in the operation and echoed Shahin’s point about mental illness and accessibility to guns in the state and the nation.

“We know there are broader issues at hand as it pertains to the mental health crisis that’s ongoing not only in our region, but our state and our country, as well as accessibility to firearms and we’re hoping that those in the right positions of power do act on this,” Hammoud said. “It’s about time that we had solutions.”

Throughout the day, police did not reveal any details on the suspect or the victim, as the active situation continued, with the suspect likely watching the scene unfold on television inside the room.

They did confirm that there was only one victim. The Arab American News received reports earlier of one possible fatality.

Police evacuated employees and as many as patrons of the five-story hotel as possible. Just before 8 p.m., Bartok told reporters the Dearborn Fire Department had to extend its ladder to a third floor window to evacuate a hotel guest it couldn’t get to in its earlier evacuation. 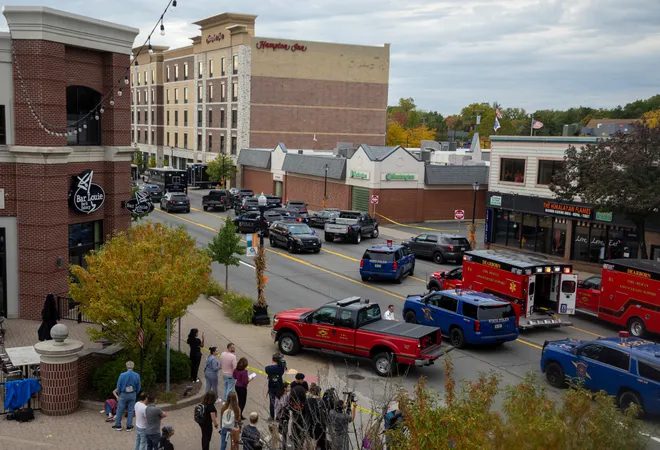 People gather near the Hampton Inn in west Dearborn, where an active shooter barricaded himself in his room on Thursday, Oct. 6.
Photo: David Rodriguez Munoz/Detroit Free Press

Dearborn squad cars and a bomb squad unit, including Michigan State Police troopers and several other area law enforcement agencies, had lined up on the major street in west Dearborn between Military and Monroe Streets by Thursday afternoon. Police asked people to avoid the area at all costs.

Law enforcement said over multiple social media channels that the gunman posed an extreme threat to the area surrounding the hotel. Local schools were notified of the active shooter situation, with one close by going into a soft lock down, before clearing students to leave the premises.