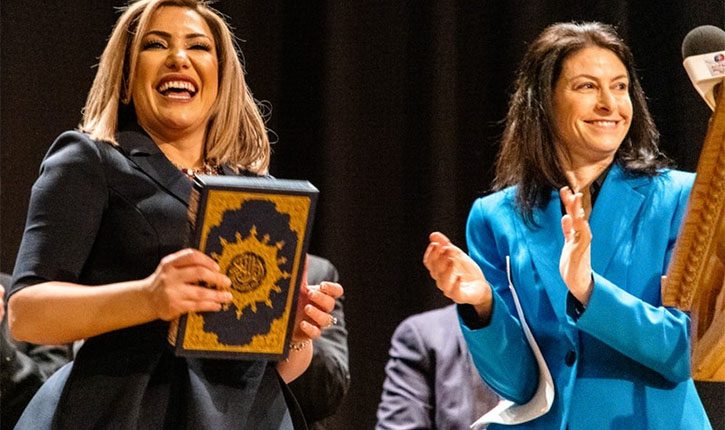 LANSING – Michigan Attorney General Dana Nessel has announced the appointment in her second term of Fadwa A. Hammoud as chief deputy and Ann M. Sherman as solicitor general. Current Chief Deputy Attorney General Christina Grossi will be leaving the department after more than a decade in public service.

“During her four years as solicitor general, the Department has benefited greatly from Fadwa’s keen legal insights, advocacy skills and wisdom,” Nessel said.  “Fadwa was the first Arab American solicitor general in the country, and the first Arab American woman to argue before the United States Supreme Court — in a case she recently won for the Department. I am thrilled and honored that Fadwa has agreed to continue to share her many talents with us, as she takes on the greater role of chief deputy. “

Hammoud was sworn in as Michigan’s 12th solicitor general on January 15, 2019. In her current role, she supervises all appellate activity and, as bureau chief of the Department’s Criminal Justice Bureau, supervises all criminal work in the Department. Hammoud also oversees the prosecution of criminal charges related to the Flint Water Crisis along with Wayne County Prosecutor Kym L. Worthy. Hammoud assumed her role as Michigan’s top appellate attorney after years of public service on behalf of the people of Wayne County. As lead attorney under Worthy, Hammoud established the Business Protection Unit and prosecuted criminal enterprise, homicide, financial crime and identity theft cases.

“Attorney General Dana Nessel has built an office that draws on the diversity and dynamism of all communities. Public institutions work best when they are informed by people’s lived experiences, and I am proud to be a part of a team that looks like the state we serve. This represents the shattering of yet another glass ceiling and it is my sincere hope that the leadership and achievements of people of different backgrounds, cultures and faiths becomes common place in our workplaces and our communities.” Hammoud told The Arab American News.

“In my new role as chief deputy attorney general, I will continue to approach decisions with the widest possible perspective of who might be impacted, and will take great pains to ensure no one—no matter their background or zip code—is left out of that calculus. I don’t view public service as a job, but a passion and a calling worthy of a lifetime of effort,” Hammoud added.

She also served as a trustee and treasurer of the Dearborn Public Schools Board of Education and the Henry Ford College Board, championing public education in her hometown. A first-generation American, Hammoud advocated on behalf of Wayne County’s various ethnic and immigrant communities and advised state, county and city leaders.

“Ann brings a wealth of experience, a commitment to the office and appellate work, and the respect and trust of her colleagues and the legal community,” Nessel said.  “Her legal insight and unflappable nature make her an invaluable asset to the Department and a natural fit for the position of solicitor general. Ann’s talent and skills have been lauded by her colleagues in the legal community and recognized by numerous organizations.”

Sherman worked at the Department of Attorney General for nearly 18 years, including as an appellate specialist in one of the Department’s large litigation divisions, as assistant solicitor general and most recently as deputy solicitor general. She was awarded the 2021 National Association of Attorneys General Meritorious Service award, and over the years the Department has honored her with a Civil Litigator of the Year award, two Appellate Advocacy awards and several desk awards for success in important cases involving the state.

Sherman is a member of the Michigan Supreme Court Advocates Guild, a State Bar Foundation Fellow and an elected council member of the State Bar of Michigan Appellate Practice Section. Prior to joining the Department, the Michigan State University College of Law graduate clerked for Judge Richard F. Suhrheinrich on the Sixth Circuit Court of Appeals.

Outgoing Chief Deputy Christina Grossi began her career in private practice and joined the Department in 2010. She transitioned from a staff attorney in the Public Employment, Elections and Tort Division to section head of the State Operations Division in 2013 and became the State Operations division chief in 2018. According to a press release from the AG’s Office, as chief deputy, Grossi oversaw the Department’s 550 employees and a caseload of roughly 40,000. In addition to her work at the Department, Grossi is an adjunct professor at Michigan State University’s College of Law.

“Over the years, Christina’s contributions to the office have been inestimable, most notably in her role as chief deputy as she artfully guided the office through the COVID crisis, budget issues and other challenges,” Nessel said. “Christina is a champion for the work of the Department’s dedicated public servants. She will be greatly missed, and we wish her well in her future endeavors.”