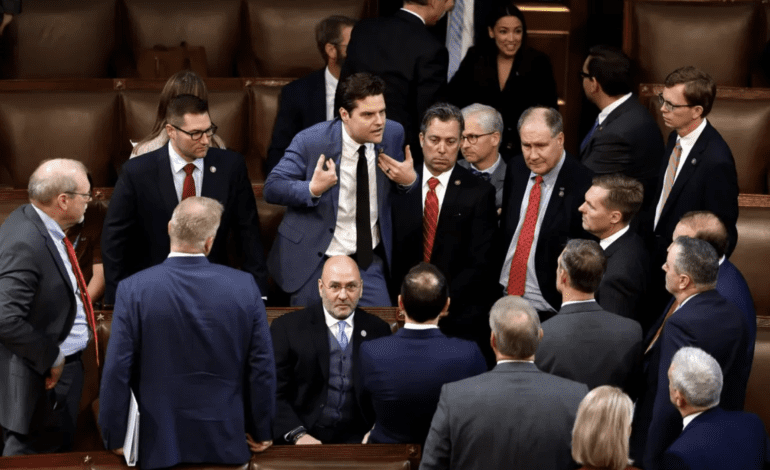 ep.-elect Matt Gaetz (R-FL) talks to fellow members-elect during the second day of elections for Speaker of the House at the U.S. Capitol Building on January 04 in Washington, DC. - Videograb

Like many Americans, I watched with dismay this month as the House of Representatives struggled through 15 votes over four days to select a new speaker. The sense of dysfunction was remarkable. Anyone watching might well have wondered about our ability to govern ourselves.

For a week, there was no speaker to call the House to order. Elected members couldn’t take the oath of office and start conducting business. One house of the Congress was effectively AWOL. Finally, Rep. Kevin McCarthy (R-CA), secured enough votes to win. But the chaos and divisions do not bode well for his leadership.

I served in the House for 34 years, and I never witnessed anything like this. In fact, it had been 100 years since the House majority took more than one vote to select a speaker. The last time it took more than 15 votes was in 1859, when Congress and America were bitterly divided on the eve of the Civil War.

It’s fitting that the contest took place on the two-year anniversary of the Jan. 6, 2021, attack on the Capital, when supporters of Donald Trump tried to prevent the Senate from confirming Joe Biden’s election as president. Both events are reminders that democracy is fragile.

Reportedly, McCarthy won only after granting concessions to hard-right conservatives who demanded rules changes and committee assignments to amplify their power. That’s a dangerous posture for our system of government, when an extreme minority can effectively dictate terms to the majority.

It also makes it less likely the House will compromise with the Democratic-controlled Senate to pass legislation. Government shutdowns may be looming when must-pass spending bills come due. It may be difficult, later this year, for Congress to raise the federal debt limit and prevent a default on U.S. financial obligations. It would be bad enough if the deadlock over House leadership were the only sign that our democracy is fragile, but it’s not. There’s also the fact that Trump refused to recognize the results of the 2020 election, and that many Americans still believe that it was rigged.

These blows to our system accumulate. According to the Economist Intelligence Unit annual democracy index, the United States has been a “flawed democracy”, not a full democracy, for several years. It cites Trump’s election denial, the nation’s “extremely low levels of trust in institutions and political parties” and “deep dysfunction in the functioning of government” as reasons for the mediocre rating.

Some of this reflects the politics of the day. We Americans have become increasingly partisan and suspicious of each other. Republicans and Democrats seem to inhabit different universes. Gerrymandered election districts and partisan media outlets have pushed elected officials to the extremes. McCarthy, for example, is no centrist. He aligned himself with Trump, who endorsed him for speaker. Yet his ambition was almost thwarted by the party’s right flank.

Today, an occasional display of bipartisanship can seem almost poignant, as when Biden and Senate Republican leader Mitch McConnell traveled to Kentucky this month to celebrate infrastructure funding.

Partisanship isn’t always bad, of course. In our two-party system, it’s part of how government works. But it can be overdone to the point where it brings the whole enterprise to a halt. Political parties should compete for power, but compromise when needed for the good of the nation.

We Americans are deeply fortunate. Our nation’s founders devised a system of government that has served us well for over 200 years. But it isn’t written in the stars that the United States will always prosper, or even exist as a democratic republic. Maintaining a functioning democracy is a big challenge, and it’s up to all of us to ensure our representatives perform their job seriously and make the system work.

— Lee Hamilton is a senior advisor for the Indiana University Center on Representative Government; a distinguished scholar at the IU Hamilton Lugar School of Global and International Studies and a professor of practice at the IU O’Neill School of Public and Environmental Affairs. He was a member of the U.S. House of Representatives for 34 years.