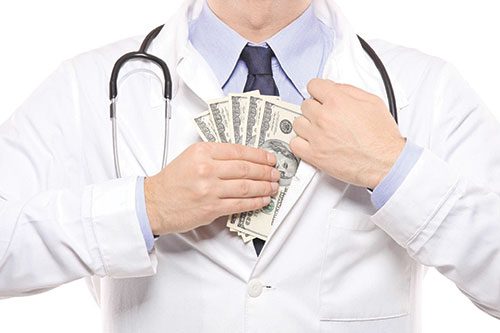 Over 20 years ago, Pat Palmer, in her own words, “stumbled upon a $400 overcharge in a bill my father received for a routine medical procedure.” That might have become the costliest “overcharge” the gouging, overbilling health care industry ever inflicted on itself. Because it led Ms. Palmer, whom Steve Brill (author of the Time Magazine cover story, “Why Medical Bills are Killing Us,” April 4, 2013) called “one of my earliest tutors as I tried to figure out the dysfunctional world of medical economics and billing,” to start a business investigating the overbilling of patients.
Located in Roanoke, Virginia, Medical Billing Advocates of America (MBAA) (billadvocates.com) makes money by saving patients money. No savings, no charge. In twenty years, MBAA, which was founded by Palmer, has collected a multitude of cases of doctors, hospitals and insurance companies overcharging. This evidence reflects routine, everyday overbilling in the many billions of dollars a year.
How extensive is this commercial crime wave? The nation’s expert on computerized billing fraud, Malcolm Sparrow, who is an applied mathematician at Harvard, estimates medical billing fraud adds up to a minimum sum of $270 billion a year or at least 10 percent of all health care expenses. His classic book, “License to Steal,” showed that these ripoffs are not just clerical errors or computer malfunctions.
The systemic fraud goes far beyond the organized criminal syndicates defrauding Medicare that the FBI raids once in a while. The frauds are designed with corporate interests in mind to filch your wallet directly or under the nose of unobservant insurers, from the very design of billing statements to the manipulation of codes.
Palmer is out with a paperback titled “Surviving Your Medical Bills,” which is self-published by her firm, MBAA. She explained she almost gave up on “all the rules and regulations that no one is enforcing.” It’s a good thing she didn’t. Instead, Palmer decided to rile up the patients and their families directly with her book by describing how outrageously brazen billing practices are (not just an aberration) and showing how people can become common-sense investigators if they receive these shocking bills.
Start with the fact that about eighty percent of all medical bills contain errors, with the average error being $1,300. Most of these overbillings favor, unsurprisingly, the sellers (euphemistically called “the providers”).
According to Palmer, the situation has been getting worse. With the number of diagnostic codes growing from 17,000 to about 60,000 under Obamacare, to supposedly improve efficiency, the system has become even more complicated, with hospitals and few others knowing how to game or beat the system.
She lists many of the ways that medical bills are hugely inflated, using the technique known as unbundling, when tests and procedures are broken down into their individual components, which allows for double or triple billing. Some hospitals also, by their own admission, incorporate their overhead in the itemized pricing of even simple items like $20 aspirins or $15 disposable razors.
An example of double-billing technique is when a patient is charged thousands of dollars a day for being in an intensive care unit (ICU) and then also charged for the ventilator which is already factored into the cost of the ICU.
Hospitals charge for their mistakes as in the radiology department. Another example is when they charge, say $12, for each time a nurse brings you an aspirin, even though you’re paying for these hospital services in your room rate. Transporting that aspirin is called an “oral administration fee.” Gobbleygook names are omnipresent in these bills.
You can get these itemizations by refusing to accept a “summary bill,” and ask, as is your right under state law, to receive an itemized bill which sometimes will extend to pages of computer printout in inscrutable code that you can then demand an explanation in ordinary English.
Hospital billings for similar services or items vary wildly and arbitrarily. Palmer found a hospital charging $444.78 for a 10-milligram vial of the neuromuscular blocking drug Norcuron. She then found another hospital “charging $17.90 for the very same 10-milligram vial.”
In her book, she often refers to documented examples of massive overbilling on major surgeries, major medical equipment and lesser items. People have been charged for phantom procedures, nominal physician visits, for hospital employees transporting specimens down a few floors to the labs.
Patients, are charged for omnibus services and products, then charged again and again for the pieces.
Now, obviously, there are variations as well in levels of honesty and fraud between institutions and practices. But overall, what Palmer and Sparrow are writing about is, arguably, our country’s biggest commercial crime wave.
However, strangely, prosecutors reserve their few grand jury indictments largely for the criminal underworld stealing from Medicare or other insurers.
For the corporate establishment, there are always the easy ways out such as confessing error, but not intent, when caught or arguing reasonable industry practices. They quickly correct the specific bill of its offending bloat and satisfy the complaining patient, but nothing changes overall.
Clearly the current criminal laws do not adequately prevent such computerized theft and need to be amended to account for this fraud. Furthermore, if our nation followed the example of other countries and transitioned to a universal full Medicare for-all-system, this would end fee for service and the Palmers would be out of business (see singlepayeraction.org for more information).
The main point of this book is that if enough outraged or concerned patients can follow Palmer’s clear roadmap and challenge the bilkers, maybe the law enforcers will get the message and maybe the lawmakers will give these law enforcers the budgets to stop these widespread corporate crimes.
-Ralph Nader is an activist, author and consumer advocate.
By Ralph Nader