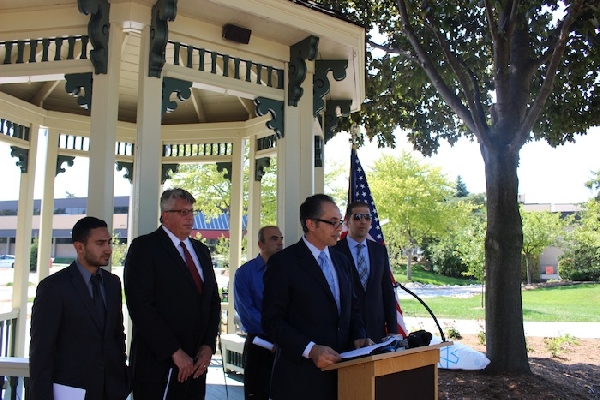 STERLING HEIGHTS — The Office of Planning had found that the American Islamic Community Center met all the technical requirements for building a mosque that was denied by the City of Sterling Heights last year, a legal complaint revealed.
The AICC is suing the city, accusing officials of violating the First Amendment rights of Muslims.
By rejecting the mosque proposal, Sterling Heights made it “practically impossible for AICC to lawfully exercise its religious beliefs in the city,” the federal lawsuit reads.
Rejecting the Muslim house of worship was accompanied by explicit anti-Muslim sentiments expressed by residents and city officials, including Mayor Michael Taylor who voiced his opposition to the mosque on grounds that it may offend the Chaldean community.
On Wednesday, AICC attorneys announced the lawsuit from the backyard of the Sterling Heights City Hall.
Attorney Azzam Elder said a 10-month investigation by the plaintiffs discovered that Sterling Heights intentionally infringed on the Constitutional rights of its own residents. The Department of Justice is also looking into the matter.
Elder said the city initially acknowledged that the mosque proposal is not in violation of any of the land or zoning regulations.
“The Office of Planning has completed its review and has determined that all specific conditions contained under Section 3.02 and other applicable design standards under Zoning Ordinance 278 have been met,” reads an official city document, dated Aug. 13.
However, following overtly Islamophobic protests, city officials had a change of heart.
At a hearing on Sept. 10, 2015, all nine members of the Planning Commission voted against the mosque. The meeting chambers and the space in front of city hall were filled with demonstrators, who mostly opposed the Muslim house of worship.
Elder said anti-Muslim protesters attacked and spat on mosque supporters under the watchful eyes of the police.
“The bigotry that’s been displayed by some residents has been lauded and reinforced by some city representatives,” Elder told reporters at the press conference.
The attorney said Sterling Heights Muslims are educators, servicemen, doctors and activists who represent the best of America.
“We want to defend the Constitution to make sure that minority rights are protected in this country,” Elder said.
Attorney Dan Dalton said the Planning Department had examined all the technical details in the project’s proposal, including traffic, zoning, parking and lighting plans.
“The submission of the mosque met all the requirements of Michigan law and the city of Sterling Heights’ ordinances for site plan approval,” he said. “There really wasn’t anything in the plan that was objectionable, and their own planner recognized the same.”
Elder labeled the alleged zoning issues as “red herring.”
“Shame on you”
Khalil Abbas, an AirForce veteran and spokesperson for the AICC, said Sterling Heights’ politicians failed to protect the legal rights of residents.
“They allowed discrimination and racism to trump the U.S. Constitution — all because they were afraid to do the right thing,” he said of city officials. “What I saw last year was the worst of Sterling Heights. I do not want our city to be defined by the actions of those who do not live by the values this great country prides itself on.”
Attorney Mohammed Abdrabboh told reporters that members of the planning commission acted out of fear and knowingly cast illegal votes.
“The only reason we are here today is because you allowed hate and propaganda, and not your own conscience to guide your vote,” he said, addressing the commissioners.
Abdrabboh also had a message for those who posted vile comments about the Muslims online and assaulted protesters outside city hall — “Shame on you.”
Mayor Taylor
Attorney Elder slammed Taylor, the mayor of Sterling Heights, saying that he should have been a leader for the entire community.
Taylor flip flopped on the mosque issue, initially rejecting the proposal, then saying he would support it at any other site.
“As a mayor of the city, you actually have a lot of influence on the Planning Commission,” Elder said. “The mayor’s comments have been contradictory. He’s been more of a politician than somebody who’s been given the great responsibility of leading the entire city.”
Hours before the lawsuit was filed The AANews asked Taylor whether he believes religious bias played a role in the commission’s decision.
He said he cannot comment on the matter.
“You have to ask the planning commissioners why they did what they did,” Taylor said. “I don’t have any special insight, and I wouldn’t speculate the way everybody else is speculating.”
On Wednesday afternoon, City of Sterling Heights said it has not received the formal complaint.
The plaintiffs are requesting “equitable relief” for building the mosque and seeking compensation for the damages from the city’s decision.
By Ali Harb