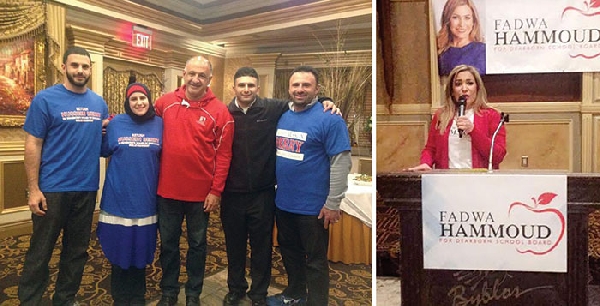 The two trustees have experience on the Board of Education and are products of the Dearborn Public Schools; both are graduates of Fordson High School.

Berry had been a trustee for a full term and served as the president of the board. He stepped down in 2014. The board appointed Hammoud last year to fill former trustee Aimee Schoelles’ seat.

The winners sought a return for the heart of education— the students.

“I feel proud,” Berry told The AANews. “I look forward to keep doing what we’re doing. I think Dearborn Public Schools is going in the right direction. We want to continue the great work, support our teachers, support our community, and part of my platform is to get parents more involved. When parents are involved, students tend to be more successful.”

Hammoud expressed her gratitude towards her campaign managers, volunteers and supporters.

“They did it,” she said. “They never lost sight of what this was about. It was about the children and that’s why it’s honestly so heartwarming. I’m looking forward to continuing to be their voice.”

Berry’s supporters patiently waited for results at Habib’s Cuisine, where he delivered a victory speech.

“The Berry campaign was the most unendorsed campaign,” he told the audience. “I didn’t care what the big boys wanted. I cared about our students and I cared about our taxpayers and tonight this is a big, huge win for people who believe in the right thing. That’s everybody in this room and everybody who voted for us.”

He added that they both won and learned.

“Sometimes you win, sometimes you learn,” he said. “But, in this campaign, we did win and we did learn at the same time, because we learned one thing for sure— endorsements don’t make a difference. They don’t count. Lawn signs don’t count. Its people that count. You love the people and they love you back.”

He thanked Dearborn and Dearborn Heights for supporting the campaign and the young volunteers for all their help and dedication. He said he knows that the future is in “good hands.”

“That was amazing, considering he was not endorsed by any major organization,” Berry’s campaign manager, Nofila Haidar, said. “We went door knocking, just to get a sample. Not to convince people, but to get a sample the weekend before the election, just to see how people are feeling about it and if they remember him. The east end, south end, west end were all for him. Everyone had a very positive vibe and they were eager to vote for him.”

As for Hammoud, her campaign party was held at Byblos Banquet Center, where she delivered a heartfelt speech.

“This was our first time on the ballot,” she said. “I am so proud to have had each and every single one of you representing me and representing our children.”

She thanked her volunteers and supporters, saying she couldn’t have done it without them. She added that she’s grateful for AAPAC’s endorsement.

“My campaign did not start when I decided to run for office,” she said. “It started when organizations like AAPAC and different individuals paved the way for years for us to be in the position that we are in today, so thank you.”

Hammoud said she will work hard to represent the children and invest in their education because that’s the only way to ensure a better future.

“To see so many of you here next to me today, I know that you believe in what we are all here for,” she said. “And, that is to build a better future for our children— we must invest in their education.”

Abe Hachem, owner of Midwest Recycling and a campaign volunteer, expressed his happiness.

“I feel great,” Hachem said. “She’s well-qualified for the Dearborn Public Schools. I’ve known Fadwa since she was 13-years-old. She went to Lowrey, she went to Fordson and she’s from the city of Dearborn, so she knows what our kids need.”