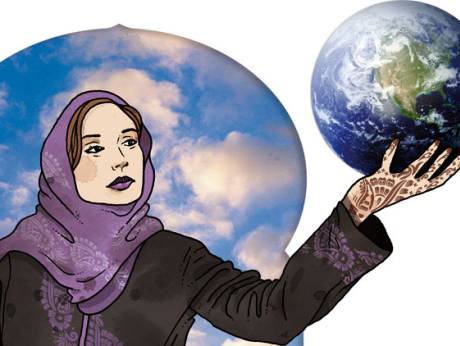 DEARBORN — Arab women have reached the summit of their education and careers, yet one perception prevails in many Westerners’ minds— “They are oppressed.”

According to Arab American women, no one answers the question, “Who said so?” rationally or allows them to speak for themselves. Instead, Westerners use the news as their pivotal comeback.

In her March 2002 “Monthly Review” article, “Understanding the Other Sister: The Case of Arab Feminism”, Susan Muaddi Darraj, a Palestinian American associate professor of English at Harford Community College in Bel Air, Maryland and lecturer at Johns Hopkins University’s masters in writing program, explained that “Arab women’s voices are excluded from discussions concerning their own lives” frequently “and they are to be ‘informed’ about feminism, as if it is an ideology exclusive to American women alone.”

With their fixed coverage on allegedly oppressed Arab women, the mainstream media have negatively impacted Western civilization’s view of Arabs’ ethnicity and specifically one religion— Islam— that not all Arabs follow. In addition, Westerners speak on behalf of all “Arab women” without permission, as if having shared their experiences.

Such discussions ultimately play a role in how the world views the Arab woman’s experience.

Not all Arabs are Muslims and not all Muslims are Arabs, but they always seem to be mistakenly intertwined. Also, not all Arab or Muslim women wear the hijab.

“When we stereotype and overlook the rich and diverse experiences of people, we come up with one-size-fits-all technical solutions that buy into the ‘them’ and ‘us’ rhetoric,” the Lebanese Christian wrote in an opinion piece for The Guardian. “As such, we limit our ability to truly engage and connect with people, especially women and girls from vulnerable communities. We limit our ability to provide them with the relevant support and assistance they require to fully participate in society. And the cycle of oppression and isolation will go on.”

Kattan’s article suggests that denying the Arab woman’s experience, in itself, subjugates and segregates her.

Hiba, a 20-year-old psychology major and criminal justice minor at Wayne State University, said she chose to wear the hijab at 9-years-old because she wanted to, not because she was oppressed.

“I’d rather speak for myself,” Hiba said, referring to feminists who do not include her or other Arab women in the dialogue. “I wore the hijab when I turned 9-years-old by choice. No one forced me to.”

She added that there are numerous oppressed women around the world and that not all of them are Arabs or Muslims.

“I’ve never been forced to do anything,” she said. “I’ve been a Muslim all my life and decided to wear [the hijab] three years ago when I had the choice not to. It’s one of the most liberating things I’ve ever done in my life.”

She explained that most classmates just assume she was forced to wear the hijab until they ask.

“They get shocked when they find out,” she said. “And, I usually go on and talk about how my mother, aunts and cousins had a choice, too. It almost feels like you have to prove a point that ‘Not all Arab women are oppressed.'”

Before Islam, women in the Arab world during the seventh century lacked rights, according to Islamic scholars and a PBS.org article entitled “Muhammad and women”, which breaks the stereotypes of today’s misinterpretations that revolve around the religion many Arabs follow.

“Even the right of life could be in question, since it was not uncommon for small girls to be buried alive during times of scarcity,” the article said. “In the Qur’an, it is said that on Judgment Day ‘buried girls’ will rise out of their graves and ask for what crime they were killed. Part of Muhammad’s legacy was to end infanticide and establish explicit rights for women.”

The article added that Islam presents women and men as equal before God.

“It grants women divinely sanctioned inheritance, property, social and marriage rights, including the right to reject the terms of a proposal and to initiate divorce,” it said. “The American middle-class trend to include a prenuptial agreement in the marriage contract is completely acceptable in Islamic law.”

According to the article, women in some countries can’t initiate divorce because of patriarchal rules, not because of Islamic principles. It also said the Prophet repeatedly counseled Muslim men to treat their wives and daughters well.

“When Islamophobic figures like Tommy Robinson or Katie Hopkins sensationalize the Saudi women’s cause, they are doing it through the lens of identity politics,” she wrote. “They do not interpret Saudi women campaigning for social and legal reformation as Saudi women who demand their rights, but as women who are leaning towards the Western way of life. Muslim and Arab women campaigners are erased of their Muslim and Arab identity and are portrayed to be working against their religious and cultural identity, rather than the system in which they live.”

Alghoul also explained in the piece that the new “Real Housewives of ISIS” comedy sketch produced by the BBC depicted the cases of British women joining ISIS in an over generalized way to serve the mainstream discussions of men oppressing women in Islam, which is the religion most Westerners think ISIS follows. She added that the sketch disregards “key factors” like “the online grooming of vulnerable underage girls, mental health and poverty” that may have led them to join.

Some of The AANews’ followers did not find the skit funny, expressing their frustration after watching the video on our Facebook page.

“Try telling that to your typical American who believes ISIS is typical Muslims and we’re all the exceptions,” Yasmine Rukia Badaoui commented on Facebook in reply to another person, who said it is known ISIS are not Muslims.

“I’m a Muslim who definitely hates ISIS,” Rica Alkurdi added. “We just don’t need more stereotypes about Muslim women. Enough is enough I guess…. Go out to the real world and learn who we are. We are not oppressed; we are given rights that most women dreamed of years ago…”