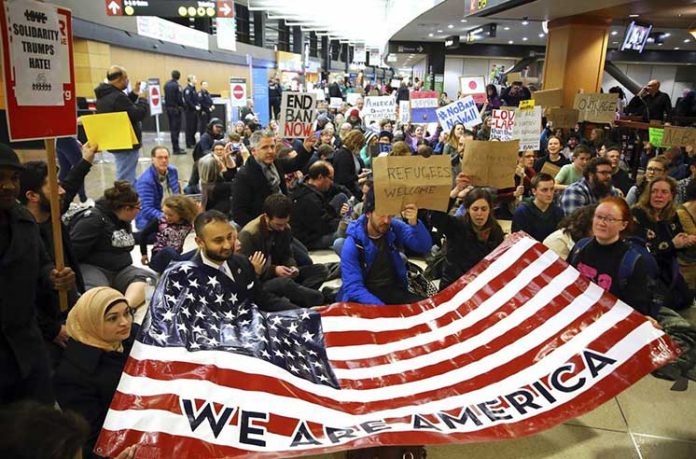 Former President Obama, federal workers, politicians, leaders of various faiths, media outlets, educators and Hollywood’s top artists stood together in solidarity against Trump’s infamous order— a stand that reiterates the greatness of America that we believe has always existed.

Days before leaving the White House, Obama said he planned not to criticize Trump and give him a grace period, unless he found a threat to the nation’s values. And so, he rightly strode back into politics to support the protests and criticize his successor’s un-American act.

“President Obama is heartened by the level of engagement taking place in communities around the country,” Obama’s spokesman, Kevin Lewis, said on Monday in a news release. “Citizens exercising their Constitutional right to assemble, organize and have their voices heard by their elected officials is exactly what we expect to see when American values are at stake.”

On Monday, Trump fired Acting Attorney General Sally Yates, who honorably and bravely refused to carry out his executive order. Trump had previously asked Yates, an Obama administration holdover, to serve until the senate confirmed a new attorney general.

She could have easily listened to the president when lawyers for the American Civil Liberties Union and other groups headed to the courts to challenge the constitutionality of his order or she could have chosen a way out by resigning. Instead, Yates undeniably used her job constitutionally on Monday when she directed top lawyers at the Justice Department not to defend the unlawful order.

“I am responsible for ensuring that the positions we take in court remain consistent with this institution’s solemn obligation to always seek justice and stand for what is right,” she wrote to them in a letter. “At present, I am not convinced that the defense of the executive order is consistent with these responsibilities, nor am I convinced that the executive order is lawful.”

Former Democratic candidate Hillary Clinton took to Twitter to support protesters and to defend the Constitution.

“I stand with the people gathered across the country tonight defending our values [and] our Constitution,” she wrote. “This is not who we are.”

Some Republicans, as conservative as they are, have also spoken out against the ban. They, too, saw that the order is unconstitutional.
Republican Sens. John McCain of Arizona and Lindsey Graham of South Carolina were the first to condemn the ban on Sunday, in a joint statement.

We commend and thank these politicians and many others on the national stage for opposing Trump’s executive order, as well as Michigan’s leaders, who are resisting in fellowship with immigrants living here.

The Arab American News also applauds those U.S. citizens who stood up to the bullying at airports across the country— and in other ways— in support of the immigrant and refugee communities.

Surveys by the University of Maryland in 2015 and 2016, asking Americans how they felt about both Islam and Muslims, have proven that Trump’s rhetoric has no home in America, just as the protesters have proven the ban doesn’t.

In 2015, 53 percent of Americans displayed a favorable view of Muslims; a year later, the number increased to 70 percent.

Also, 37 percent had a favorable attitude towards Islam in 2015. The following year, the percentage rose to 49 percent, a number not seen since before 9/11.

As one of the authors of the study, Shibley Telhami, explained, the more Trump opposed the religion and its followers, the more Americans defended it.

The nationwide “No Muslim ban” protests have reinforced his point. The prohibition is un-American and there’s no place for it here.

As the 1768 Liberty Song goes, “By uniting we stand, by dividing we fall.”