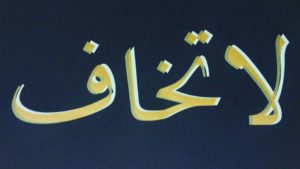 CHICAGO-Chicago-based artist Zeinab Saab looks to Islamic art to develop an intricate patchwork in a Western nexus. With finesse, precision and passion, she draws together a narrative through imagery that she describes as “having both feet in two rivers.”

A Fordson High School graduate originally displaying a penchant for photography, she graduated from Bowling Green State University in 2015 with a newfound passion for printmaking and drawing.

Today, she is a first year master’s of fine arts student at Northern Illinois University, studying printmaking further. She has showcased her art in numerous displays, most recently in Cleveland, Ohio and at the Arab American National Museum’s annex.

The backgrounds and foregrounds of each of Saab’s pieces complement perfectly aligned and perfectly positioned shapes, coming together in harmony rather than in a confrontational clash.

Illustrating complex ideas through the simple prose of basic lines and geometric abstraction, Saab’s pieces are easy on the eyes. Yet a closer look often can reveal glimpses of intricate detail where her artistic subtext enhances, rather than obfuscates, the story each piece shows.

“As perfect as it may look to you, I don’t necessarily feel that way when I am making a piece,” she admitted.

One piece juxtaposes bright Arabic calligraphy against a black background. A viewer must almost put his or her nose to the piece to be able to see the identical geometric patterns etched into the canvas that serves as the quaint backdrop to the entire work.

The lettering reads “la t’khaf,” Arabic for “do not fear.”

Each symmetrical line in the pattern, which Saab hand draws, serves a purpose to herself and her art.

“Mark making for me expressed the discipline of the artist and the other worldly, more spiritual quality of drawing that cannot be expressed through words,” she said.

Another piece, a black and white lithograph print— a form of printmaking on limestone— contrasts geometric discipline through wheel-like shapes on its edges from lithe yet ruled etchings within its parameters.

A closer look reveals Arabic script all across the piece. Print by Saab, ink and watercolor

Saab’s skill with Arabic writing, while rudimentary, does not impede upon its apparently effortless integration into her art.

“I am not ashamed to admit that my Arabic isn’t the greatest,” she said. “But making work that includes the Arabic language actually helps me learn the language better and also brings me closer to my family. It gives me a reason to continue learning about the language and about my family’s roots even more.”

Yet, the personal is also political for Saab. Her art, touching upon both personal and world history, reveals an interest for art’s salience as a political and social act.

“I am particularly interested in the influence of art and how it has been used as a tool of rebellion and uprooting change in a society,” she said, adding that while each individual piece may not, in succession, catalyze change on their own, art is nonetheless instrumental in fostering spaces where individuals and communities of artists can have their art, and thus their ideas, “analyzed, deconstructed and critiqued…where its goal is to challenge your artistic ideals.”

Zeinab Saab’s art elegantly moderates eye catching, modern-influenced energy with a humbling command of dedication and discipline under its more overt juxtaposition of east and west.

If anything, each piece accurately chronicles the wise yet whimsical nature of its artist.

Saab pays homage to discipline and a tough mental approach as the tools that solidify her passion and creativity.

“Talent is arbitrary,” she said, pointing out that an artist’s success comes from “time, effort and willingness.”

Recalling nights of toil poised towards her main goal, her trust and faith in herself have enabled Saab— as one of her pieces reminds her— not to fear.

“You have to be realistic that things can fail,” she said “And it’s your job to pick yourself back up and learn from that and make better work as a result of that failure. I had to fail in order to be successful. I had to make bad art in order to make good art. I had to find the right people to be around to stay challenged.”

And each experience, like a line on a pattern, added to a corollary of trials and errors that ultimately composed a profound, self made mosaic.

“I had to trust in myself that things are going to turn out fine,” she said. “And if they didn’t, well, I bought an extra sheet of paper to make another one.”