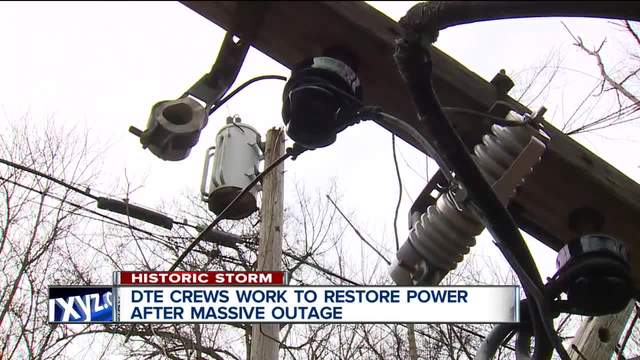 DETROIT — Utility crews reinforced by teams from several states scrambled on Thursday to remove fallen trees and repair downed electric lines strewn across Michigan the day after a record windstorm that claimed two lives and left about 1 million customers without power.

Wednesday’s severe weather event, described as unprecedented in its scope, duration and impact on Michigan’s power grid, lashed much of the state, home to about 10 million people, with near-hurricane-force winds for 12 hours, authorities said.

At the height of the crisis, Detroit-based DTE Energy Co. reported more than 800,000 customers without power, including homes, businesses, schools and hospitals. Another 320,000 customers of Consumers Energy Co. also were hit by outages.

As of late afternoon on Thursday, crews for both companies working round-the-clock had restored service to more than 400,000 customers combined, Utility executives said they expected to have most power back on by Sunday night.

Officials were planning to have all schools reopened by Monday.

Meanwhile, state police reported two storm-related fatalities that occurred on Wednesday when a fallen tree caused a car to swerve into another tree. With forecasts calling for weather to turn colder on Thursday night and Friday, emergency officials hurried to open shelters and warm-up centers for residents left without heat by the electric outages.

“We still have hundreds of thousands of people without power, and with temperatures predicted to drop tonight, we’re really concerned about people remaining warm and safe,” Governor Rick Snyder told a news conference.

The governor urged residents to stay clear of downed power lines and to check in on neighbors and family members, especially the elderly and people with health issues that hinder their mobility. Motorists were warned to be wary of traffic signals on the blink.

“This is a very unusual event … the most significant weather event that we’ve had in DTE Energy’s 100-year history,” Trevor Lauer, DTE Electric’s president and chief operating officer, said earlier.