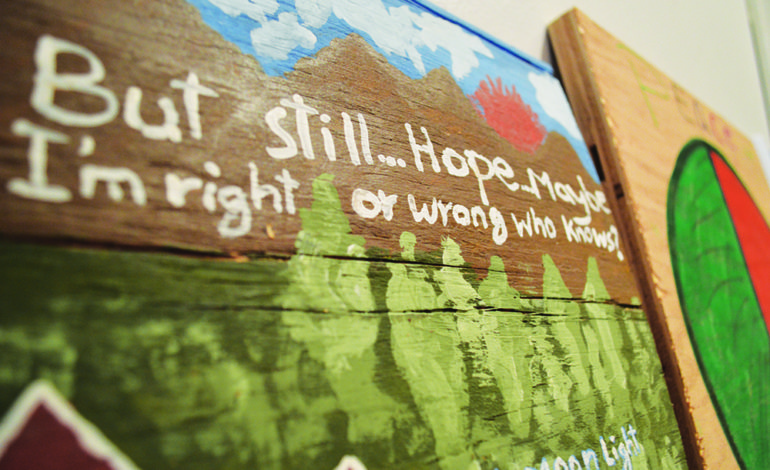 DETROIT — It was a full house on a March afternoon at Freedom House Detroit.

Through the window, you can see the historic St. Anne’s Catholic Church; beyond, the Ambassador Bridge connecting Detroit to Canada seems within reach – a prime location for the Customs and Border patrol vehicles that comb the neighborhood.

In the busiest area, the kitchen, young adults cooked and sampled ethnic West African cuisine. In the TV room, a mother watched over several children who live in the house.

These are a few of more than 40 African and Central American asylum seekers who live at Freedom House and whose cases are pending. They once worked as professionals in their homelands, but were forced to flee torture and persecution.

These doctors, engineers and artists sought freedom on American land, but their cases are pending and their status in the country is in limbo.
Now, they reside at the Freedom House on the riverfront near downtown. Ten more live in an off-site complex.

Mementos of past struggles — 34 years in the making— decorate the three-story complex; photos of families who graduated from a life of distress conjure daring personal stories and ambition.

For many of the residents, Freedom House is their only haven.

But they now live on the edge and do not go out much anymore, especially since President Trump signed an executive order restricting immigration laws. Freedom House Detroit at the foot of the Ambassador Bridge. Photo by The Arab American News

Program Director Thomas Rogers explained that in 1983, a group of activists and humanitarian workers in Detroit and Windsor recognized a growing population of new arrivals who were fleeing conflict and persecution in Central and South America— namely war in El Salvador— and who wanted to seek refuge in Windsor, through Detroit.

However, no support system existed to meet their needs, including shelter, the legal means to cross the border and cultural and trauma-informed care.

Out of those needs, the Detroit-Windsor Refugee Coalition was born.

A plethora of like organizations offer similar aid to newcomers and refugees, but Rogers said most are not as equipped to work with an international population, many of whom are PTSD survivors and have been persecuted by their governments.

Nor are they as able to link new arrivals to service providers that recognize their cultural differences and/or address language barriers, among other needs.

As an example of the type of person Freedom House helps, Rogers described a Central African woman, since granted asylum, who’d been encouraging youth to vote in her home country. After witnessing police tamper with ballot boxes on election day, she was abducted, taken to a black site, beaten, deprived of food and raped multiple times a day.

While Freedom House was initially founded to be a bridge for individuals seeking refuge in Canada, a change in Canadian laws within the past decade altered that focus. According to Rogers, the change was based on the Safe Third Country Agreement to restrict eligible asylum seekers to those with an immediate biological relative already living in Canada.

A newer Canadian law requires refugee applicants to submit their refugee status application within the first 30 days of their admission to Canada.

Throughout the process, they are entitled to some supportive services, in addition to the family that can support them there. By contrast, asylum seekers in the U.S. are not entitled to any government assistance while their status is in limbo. A refugee is someone who flees their country to a neighboring one and registers with the United Nations, which will randomly refer them to a country accepting refugees.

Refugees seeking entry into the U.S. undergo the strictest vetting process for about two years, before a decision is made whether to accept them.

While a refugee has a designated status and is eligible for aid, asylum seekers are individuals who visit an American embassy in their home county to obtain a visa, have the financial resources to travel here and then apply for asylum within a year of arrival.

Freedom House Detroit works with asylum seekers who have no support system within the approval process. It connects them with resources that provide housing assistance, legal services, access to therapists, English as a Second Language programs, employment education, financial literacy self-sufficiency programs and other such requirements, as needed.

However, the regional office where asylum seekers must go for interviews is in Chicago. What’s more, that office is still scheduling interviews from 2013 applicants.

“Our residents can expect to be without supportive service for several years,” Rogers said. Thomas Rogers places his hand on a child’s palm on glass at the Freedom House. Photo by The Arab American News

However, he added that in recent years 93 percent of Freedom House residents exited into permanent stable housing without subsidies and are financially independent.

Rogers said many asylum seekers are put into mandatory detention upon entry into the U.S., where a credible fear interview is conducted to determine if they have a real fear of being sent back to their countries of origin.

From there, they begin a defensive court process to seek asylum.

“It’s jail for immigrants,” he said, adding that these facilities are privately owned.

He also said asylum seekers are five times more likely than immigrants in general to lack access to appropriate legal aid and have half the chance of obtaining resident status, all the while their PTSD is exasperated.

While 34,000 immigrants sit in detention with common criminals, the Trump administration is seeking to expand deportation and build more detention sites.

Rogers said the solution would be to either hire more judges or change immigration policies to uphold America’s humanitarian values.

He added that as Trump’s executive orders put restrictions in place that make it harder for people to flee death in their home countries, the Syrian refugee crisis gets the most media attention.

Because of that, community members who wish to donate are mostly choosing to help organizations that assist Syrian refugees, rather than asylum seekers.

That is concerning, because both groups are fleeing similar situations and have similar needs, he said.

Rogers added that Freedom House staff were able to assure residents that campaign rhetoric would not affect them.

However, that changed with Trump’s executive orders.

Now, those families’ hopes have vanished. Rogers also said Freedom House has had to make adjustments to its programs, including one in which volunteer taught residents English and how to get around town.

In light of the executive orders, Rogers said Freedom House has banned volunteers from taking any resident off site, to reduce any interaction with law enforcement that could jeopardize their claim or cause their case to be denied or then be put into detention.

“Everybody is afraid,” he said.

Rogers also said that when some residents see the highly visible patrol cars surrounding the house and hear their sirens, they relive their traumas, their PTSD worsens and they rely more often on mental health partners.

“I don’t think that people outside of the immigration community recognize the impact of these hateful words and policies, and how they play out in the lives of people,” he said.