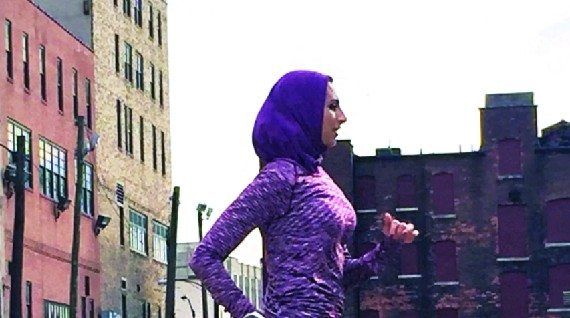 DEARBORN — On course to cross another milestone, Rahaf Khatib, the first Muslim woman to wear a hijab on the cover of an American health and fitness
magazine last year, is set to run along side tens of thousands at the 121st annual Boston Marathon.

The 33-year-old Dearborn native has participated in several full and half marathons in the last few years, including the Detroit Free Press Marathon and the Bank of America Chicago Marathon.

While Khatib is now a seasoned runner, she told The AANews her goal was always to compete in the one of the six most prestigious “crème de la crème” of annual world marathon major events.

While qualifying is itself an achievement, there is something significant and personal about this year’s race.

The Damascus-born daughter of Syrian refugees said she is running in mid-April for the displaced millions from
her homeland, and is raising thousands of dollars to help those who resettled in Metro Detroit become self-sufficient through the local non-religious and non-political charity Syrian American Rescue Network (SARN).

“My parents are immigrants from Syria and I was born in Syria,” she said.

“So, this run is very near and dear to my heart. The fundraiser brings out the spirit of the marathon.”

She is also one of the 14-member-team chosen by a homeopathic supplement company and Boston Marathon sponsor to run in the 2017 all-women’s race, marking the 50th anniversary of the participation of Katherine Switzer, the first woman in the race.

Khatib said while she was considering which race to enter in early December, she searched for an affiliated charity that would aid refugees in the States.

She didn’t find any, so she launched her own and proposed it to the sponsor.

“It was a dream come true,” she said of the sponsor approving her raising money while providing her with a coach.

The LaunchGood campaign has since raised about $12,000.

Khatib said most attention to the fundraiser came from
adverting on her Instagram page, @RunLikeAHijabi, which has close to 9,000 followers.

Running a marathon while wearing a hijab is sure to turn some heads, which is Khatib’s aim. She hopes that beyond raising funds, she can raise awareness
about the urgency of helping and humanizing fleeing Syrians.

In 2013, two brothers originally from Kyrgyzstan detonated an explosive near the finish line, killing three and injuring hundreds of others, allegedly in protest against the U.S. war in Afghanistan.

Khatib said she also wishes to shatter stereotypes about Muslims and prove that Muslims are not related to terrorism.

“Being a hijabi running Boston will breaks stereotypes and say ‘I’m American, I’m a Muslim and that’s not Islam,'” she said.

Ayesha Sheikh, vice president of SARN, told The AANews the organization welcomes the donations as more refugees emigrate to the region and create high demands for resources.

However, the mainly volunteer staff is more excited about Khatib shedding light on the directly affected 2,000 families in the region, many of whom have to walk
or bike miles in the winter to buy groceries for their families.

Sheikh also founded the Women Physicians for Humanity, a group of about 2,000 women physicians committed to improving the wellbeing of children and women, both nationally and abroad.

The Beaumont Hospital pediatrician said she is rooting for Khatib as she runs in the marathon, but most importantly, the athlete continues to be an exemplar of immigrants’ success and champion of women’s empowerment.