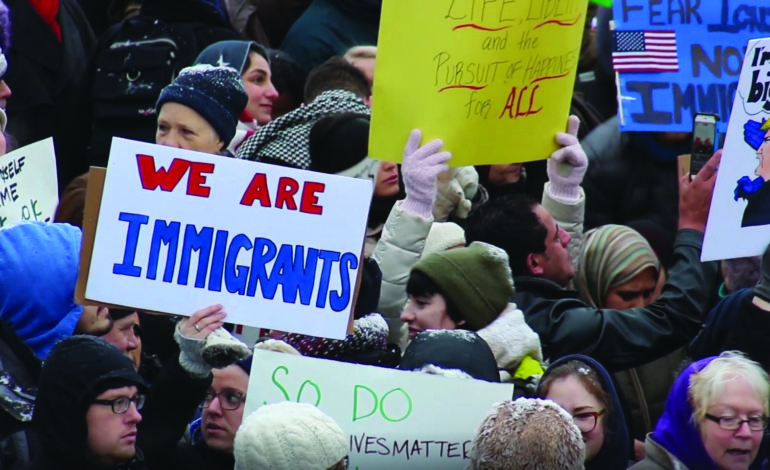 Protestors rally against President Trump's executive action to halt the refugee program and immigration at Detroit Metropolitan Airport on Sunday, Jan. 29 - Photo by The AANews

SAN FRANCISCO — Immigrant rights advocates say that despite the cloud of fear hanging over communities in the first 100 days of the Trump administration, there is also a growing and increasingly organized resistance.

“We are seeing an increase in the number of people apprehended for removal,” Melissa Chua, immigration director of the International Rescue Committee (IRC), told reporters on a national press call organized by New America Media and Ready California. “It’s not just growing infrastructure [for future deportations]…we’re seeing it in reality.”

U.S. Immigration and Customs Enforcement made 21,362 arrests from January 20 to March 13 of this year, a third more than during the same period in 2016, according to numbers requested by The Washington Post. The figures include 5,441 non-citizens with no criminal record, double the number during the same time last year.

The statistics reflect a shift in priorities from the Obama administration, which sought to prioritize certain criminals and recent arrivals for deportation. Under Trump, the deportation priorities have expanded so much that they can be used to target almost any undocumented immigrant.

Immigrant and refugee rights advocates say the effect on immigrant communities is palpable.

Angelica Salas, executive director of the Coalition for Humane Immigrant Rights (CHIRLA), described it as “one of the most horrendous periods in American history for immigrant families.”

“What we’re seeing,” Salas said, “is just a harsher way by which DHS [the Department of Homeland Security] is dealing with all matters of immigration, especially when it comes to stays of removal or requests for relief.”

More than 38 percent of the individuals detained in the Feb. 9 ICE raids in Southern California, for example, had only minor infractions, many of them from years ago, according to Salas.

“The other thing that we’re seeing,” she said, “is that they’re being harsher when it comes to individuals who had … stays of removal.

Since taking office, Trump has signed executive orders that call for “sweeping changes on immigration,” said Chua of IRC, adding, however, that “many of these proposed changes face some real, significant hurdles.”

Some, like the construction of a border wall, can’t be implemented without funding. Others have been blocked by the courts, including the administration’s attempt to withhold federal funds from so-called sanctuary cities; and both versions of Trump’s “travel ban”, which aimed to curtail travel from certain predominantly Muslim countries and lower the number of refugees allowed admission into the United States.

“While many of the changes proposed by the administration may threaten refugees, immigrants and their families, there still exist some real barriers to implementation, offering some real avenues of hope for immigrant communities,” Chula said.

Advocates say many of these signs of hope lie outside of Washington.

“The immigrant rights movement is getting more organized, more powerful,” said Salas, pointing to local and state efforts that seek to protect the rights of immigrants across the country.

“What is incredible is the many cities and schools defending immigrants,” she said.

On May 1, she noted, about 30,000 people marched in the streets of Los Angeles to defend the rights of immigrants.

“In the mid-90s, California looked a lot like Texas does today,” Salas said, referring to when California voters passed Prop 187. That ballot measure helped get its supporter, Republican Gov. Pete Wilson, elected. But it led to an even bigger backlash against the GOP in the state, and is largely credited with the mobilization of Latino voters who have changed the face of California politics.

Texas, which has the nation’s second-largest Latino population after California, could see a similar backlash.

“What we’re seeing in Texas is the same kind of mobilization,” she said.

“There are many families that are afraid,” said Adriana Guzman, immigrant outreach coordinator with Faith in Action Bay Area. “Our message to them is that there are steps they can take right now.”

Guzman said she is encouraging individuals to talk to a trusted legal services provider to see if they qualify for immigration relief, to make a family preparedness plan, including who will take care of children if something happens to their parents, and to carry the number of a trusted immigration attorney they can call in case of an emergency.

Most importantly, Guzman said, individuals should know that they have certain rights under the U.S. Constitution, regardless of their immigration status. These include the right to remain silent, the right to not open the door to agents without a warrant signed by a judge, the right to speak to a lawyer and to make a phone call and to not sign anything they don’t understand or that isn’t true.

“Thousands of community outreach workers are spanning their communities, delivering Know Your Rights presentations,” Salas said. From helping eligible immigrants become citizens and register to vote, to protesting in the streets and supporting legal challenges in the courts, she said, immigrant rights advocates have been able to “make a statement in these very difficult days.”