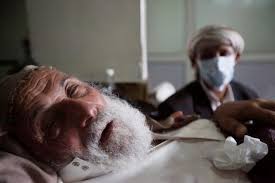 GENEVA — The number of suspected cholera cases in war-torn Yemen has risen to more than 100,000 since an outbreak began on April 27, the World Health Organization said on Thursday.

The rapid spread of the disease through 19 of Yemen’s 23 governorates highlighted a humanitarian catastrophe in Yemen after two years of civil war that has disabled most health care facilities, according to the U.N. humanitarian office.

“To date, 101,820 suspected cholera cases and 789 deaths have been reported in 19 governorates,” WHO spokesman Tarik Jasarevic told Reuters.

The WHO has warned that the number of cases could hit 300,000, but the daily number of new ones declined slightly in the week to June 5 to 3,432, compared with 3,651 in the previous seven-day period.

“Yemen is in the grip of a severe cholera epidemic of an unprecedented scale,” the U.N. humanitarian office said in a report published on Wednesday.

“Malnourished children and women, people living with other chronic health conditions and households that do not have enough to eat are now at greater risk of death as they face the ‘triple threat’ of conflict, famine and cholera,” it said.

The war has left 19 million of its 28 million people needing humanitarian aid and many of them on the verge of famine. The cholera outbreak is the second wave of an epidemic that began in October, spread until December and then dwindled, but was never brought fully under control.