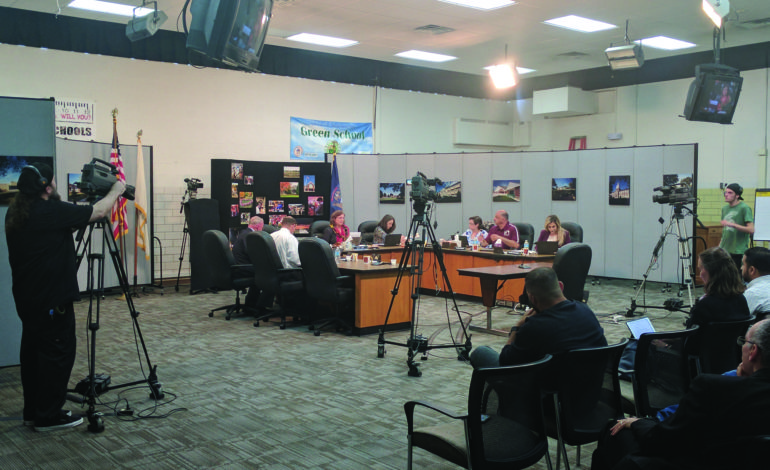 A recent Dearborn Board of Education meeting - Photo by The AANews

The inability of the Dearborn Board of Education to reach an agreement and appoint a new trustee to fill the seat vacated by former trustee and now Wayne County Circuit Court Judge Mariam Bazzi disappointed many in the city. Three Board members, Fadwa Hammoud, Mary Lane and Michael Meade, selected local businesswoman Celia Nasser. Trustees Mary Petlichkoff and Jim Thorpe chose former Board member Roxanne McDonald. Trustee Hussein Berry did not participate in the selection process. The decision had to be postponed until June 19.

Roxanne McDonald does not deserve this seat because she clearly chose to not run for re election to the board last year in order to seek the position of state representative.  She ended up losing that campaign to Abdallah Hammoud.

Petlichkoff said that McDonald is “volunteering her services to step back in [with] full board experience, understands responsibilities, knows her obligations and duties and is fully prepared to move us through the next few months.” Thorpe agreed with her.

Unfortunately, they disregarded a statement McDonald posted on her Facebook page less than two months ago.

On April 25, she said that her supporters encouraged her to run for Dearborn City Council, but she chose not to do it because she wanted to devote time for her family.  “I cannot, in good conscience pursue a seat on the council and all that goes along with running a campaign if I’m unable to put 100 percent effort towards that endeavor,” she wrote on Facebook.

If she believes she won’t be able to give her 100 percent effort as a City Council member, then she clearly cannot serve as a trustee on the city’s school board.

The inability of the Board of Education to select a new trustee is not a victory for anyone; it is a defeat for Dearborn voters who deserve to see their elected officials make the tough decisions and not refer them to another body.

This selection process has been marred by a vicious social media campaign against the Arab American Political Action Committee (AAPAC), accusing it of improperly interfering in the process to advocate for its member, Celia Nasser. AAPAC’s detractors spread the false news that the political organization pressured board members or “rigged the process.” This is not only an attack on AAPAC, it is also an insult to board members and an attempt to dissuade them from selecting Nasser in order to prove their “independence.”

This is not activism; this is bullying.  Those who use these tactics clearly don’t have the interest of our children or our schools at heart.  First, these conspiracy theories were absolutely false as affirmed by AAPAC President Mona Fadlallah during Monday’s board meeting when she said that AAPAC “has a sincere, longstanding commitment to this district and its schools.”

Second, AAPAC members have every right to lobby board trustees to vote for this or that candidate, just like any other resident. Advocating is a right and getting involved is a duty of every resident.

AAPAC’s history of involvement in Dearborn schools and the facts on the ground put lie to the accusations leveled against it. The organization worked hand in hand with the school district to pass a $150 million bond in 2002, which allowed the building of schools such as Geer Park Elementary, McCollough-Unis Middle School, Michael Berry Career Center, Salina Middle School and the South End Community Center.  The bond also permitted the expansion of other schools, such as Fordson and Dearborn High Schools. AAPAC and its members deserve a praise from this community and not baseless attacks.

That being said, the attacks on AAPAC were and are a distraction from the real issue, appointing a new board member. Monday’s inability to reach a decision was marked by trustee Hussein Berry’s decision to not participate in the selection process without giving a clear explanation. Berry’s decision was puzzling and inexplicable to Dearborn voters who elected him to make the decisions, no matter how difficult they are. The decision to appoint Bazzi’s replacement may be difficult, but it is an extremely sensitive and crucial one.

“Shame on people who let others divide them,” Berry said during the meeting after public comments. “We’re one community, we’re one city [and] we’re one school district… This school district has done some amazing things this past decade. It has jumped a lot of hurdles.”

Berry is known for his service to this community, especially to the students of this district— garnering the admiration and support of most. Those who elected him deserve to know his choice or at least why he declined to participate. We therefore urge Berry to participate next Monday and help the board make a decision. We also urge him not to vote for Roxanne McDonald, because she was the 2015 trustee who did not give the beloved late former Principal Imad Fadlallah a chance to be interviewed for the position of superintendent after Brian Whiston became state superintendent, when three other trustees— Aimee Schoelles , Mariam Bazzi and Mary Lane— did.

If the board does not appoint a trustee within 30 days from the date of the vacancy, the five member Wayne County Regional Educational Service Agency (Wayne RESA), the county’s intermediate school district, will take over the process and select a trustee.  The inability of the Board of Education to select a new trustee is not a victory for anyone; it is a defeat for Dearborn voters who deserve to see the trustees they elected make the tough decision and not have it sent to another body.

Too much is at stake for the next 18 months, including selecting a new president of Henry Ford College, redrawing boundary lines and solving the overcrowding issues facing the district’s high schools in particular, as well as many other important issues that the Board of Education will have to tackle. The board should come together on June 19 and make the right decision in order to move forward united for the future of our kids and the sake of our schools. γ