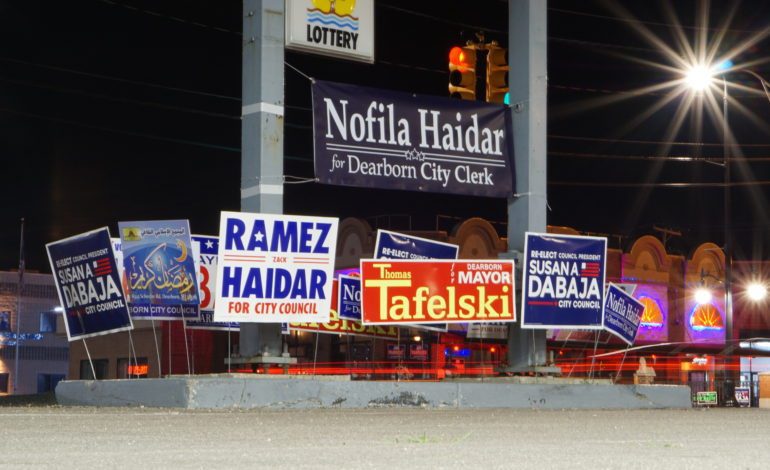 DEARBORN — While lawn signs, bumper stickers, handbills and lots of red, white and blue are all pieces of the campaign paraphernalia, these materials can be an eyesore if candidates don’t follow city ordinance for placement and cleanup.

So, what are some of the do’s and don’ts of campaigning?

“For the campaign workers, they need to be about 100 feet from the entrance,” Police Chief Ron Haddad told reporter Hassan Khalifeh on Tuesday. He also said the police presence on Election Day is to help people stay out of harm’s way.

Haddad also said it was great to see young people partake in Election Day, but added that first-time campaigners should be mindful of their surroundings for safety reasons. There were active construction sites around Dearborn during the primary election.

In Hamtramck, voter Susan Dunn discussed the need for campaign representatives to stay the appropriate distance from polling entrances.

“When one person does it, then another person wants to do it,” Dunn told intern Stephen Martin. “And it has to be level for everybody. We’ve had problems in the past where they are up against the door.”

Dunn also said she feels it is up to each candidate to properly inform their representatives of the rules and regulations of campaigning.

As to the lawn signs, according to chapter five, article seven of the Dearborn city ordinance, campaign signs placed on private property have to be removed no more than 15 days after the election.

Section 5-1351 further states that failure to remove any campaign signs for candidates who lost an election are subject to removal by the city, and the candidates will be charged the costs for removal.

Chapter 12 of the city charter explicitly states that no campaign literature or signage may be distributed within 100 feet of any city building entrance; it is also prohibited for any campaign materials to be attached to city property.

According to the city’s website, there are designated storage bins at the Dearborn Administrative Center for any signs removed by city inspectors that don’t meet ordinance requirements. These bins are emptied every Monday and candidates have access to the signs before they’re disposed.