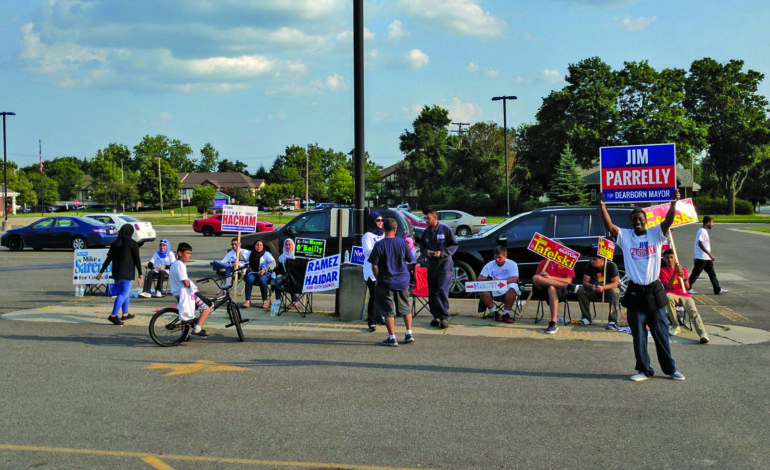 Enthusiastic campaign volunteers outside Salina School - Photos by The AANews

DEARBORN — Despite excitement about this year’s primary elections, the bustle of many campaign volunteers outside polling locations and significant mayoral races, the average voter turnout in Dearborn, Dearborn Heights and Hamtramck was about 22 percent.

While visiting several polling locations in each city throughout Election Day, The AANews spoke to volunteers, candidates and community members about their experiences.

The average voter turnout in East Dearborn was
16 percent. The lowest rate was 11.22 percent at the Woodworth Schools polling location.
The highest percent of votes was at Henry Ford Retirement Village at 45.47 percent.

In West Dearborn, the average voter turnout was 27 percent. The lowest was at the Long School precincts
at 17.37 percent, while the highest turnout was
DuVall School at 38.16 percent. Of the 60,752 registered voters in Dearborn, 22.58 percent (13,718  voters) went to the polls on Aug. 8. That’s a 4 percent drop from last year’s primary elections, but still higher than that in the 2013 primaries, which had races for the same municipal seats as this year.

Mayor Jack O’Reilly was the top-vote getter on Tuesday, earning about 44.5 percent of votes (6,018). He will face incumbent Councilman Tom Tafelski, who received about 38.9 percent of votes (5,266), in the November general elections.

A potential shake up on the council: Ford and Herrick among top 7

Tafelski earned the most votes in most west side precincts, while O’Reilly won in the majority of east side precincts. Parrelly came in second and third on the east and west sides, respectively. Of the 16 candidates who vied for seven open City Council seats, 14 will face off in the general elections. All five incumbents seeking reelection advanced, but two incumbents didn’t seek another term, so the Council will see at least two new faces.

Ford earned the greatest support in those precincts where Tafelski was the top vote-getter.

However, there was a sharp drop in votes cast for Arab American newcomers Nada Al-Hanooti (2,712 votes), Fayrouz Bazzi (2,510 votes), Ramez Haidar (2,213 votes), Ziad Abdulmalik (1,412 votes) and Rifaat Hacham (1,139 votes). Abdulmalik was the top-vote getter among City Council candidates in the Southend precincts, however neither he nor Hacham will appear on the November ballot.

Even though voting in Dearborn was slow when the polls opened at 8 a.m., volunteers were optimistic.

At McDonald Elementary School, where the turnout seemed unfavorably low in the morning, Mayor O’Reilly spoke about the need for the state to reschedule the primary election date to September, when residents are not vacationing and schools are in session.

Amer Zahr, a local activist and campaign manager for Parrelly, said the volunteers’ energy attracted voters to engage with them about the candidates’ platforms.

Unlike other campaigners, Zahr anticipated the voter turnout to be higher than expected in the east side than in the rest of the city.

“We expected… the Arab American community to get a lot more engaged and mobilized from everything that’s been going on in the past years,” he said. At Maple Elementary School, two 18-year-old campaigners and newly registered voters said they’d mostly seen senior citizens at the polls. However, they were confident that would change later in the day when people got off work.

Outside of Lowrey Middle School, young campaigners also displayed their enthusiasm. Dressed in a spectrum of campaign t-shirts, the volunteers gathered to speak to Sareini, who had stopped by to chat with them.

Sareini pointed to construction around the school, but told The AANews that it was not stopping voters or volunteers from coming through.

In Dearborn’s Southend, spirits were higher, but not the number of votes. At around 2:20 p.m., precincts at Salina Intermediate School had only 163 votes. By day’s end, 352 votes were cast at both of Salina’s precincts.

Volunteer and local educator Zinab Zreik told The AANews that it wasn’t as busy as she’d hoped.

“It could be because of the construction behind us,” she said, adding that they had to call City Hall to ensure a sign was placed at the parking lot entrance to indicate people could vote there.

“For a good three hours, there were only five voters who came in the morning,” she said.

On Dearborn’s west side, precincts at Edsel Ford High School had 139 votes by 6:20 p.m. By the time polls closed at Haigh Elementary School, where 2,494 voters are registered, 730 votes were cast.