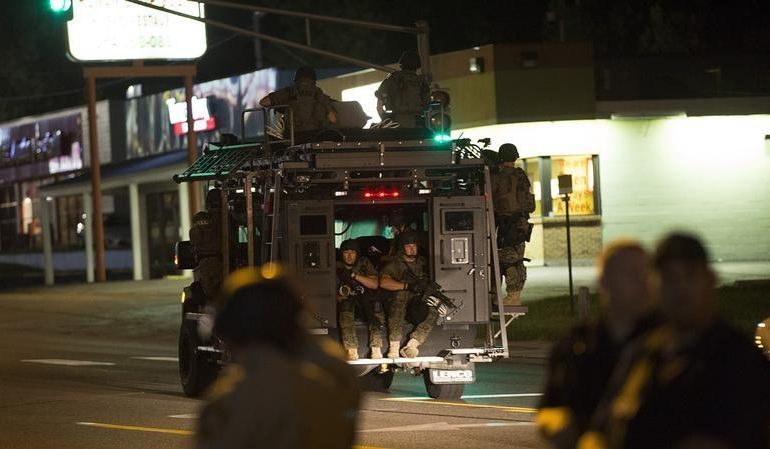 Officers ride an armored vehicle as they patrol a street in Ferguson, Missouri August 11, 2014. REUTERS

DEARBORN— During his campaign, President Trump promised to revoke former President Obama’s executive order that demilitarized local police to remilitarize them once again— reportedly for their own and their communities’ safety.

Only two weeks ago, Trump issued an executive order that rescinded Obama’s.

“We’ve seen how militarized gear can sometimes give people a feeling like they’re an occupying force, as opposed to a force that’s part of the community that’s protecting them and serving them,” Obama said when he announced the ban in 2015.

The document said the policy change keeps communities safe and, “sends the message that we care more about public safety than about how a piece of equipment looks, especially when that equipment has been shown to reduce crime, reduce complaints against and assaults on police, and make officers more effective.”

However, national and local officials are not buying it — especially with the visible spike in discrimination and police brutality against ethnic groups.

In fact, Trump announced his plan three days after he pardoned former Arizona Sheriff Joe Arpaio, who was found guilty of police brutality and racial discrimination. Arpaio was convicted of criminal contempt of court earlier this year by U.S. District Judge Susan Bolton.

According to the Washington Times, opponents called Trump’s pardon unconstitutional.

Nabih Ayad, an attorney and founder of the Arab American Civil Rights League, said the order is damaging to community and law enforcement engagement efforts.

He said this could further increase police brutality and civil unrest and that militarization is not the way to prevent clashes between police and communities. The answer, rather, is through bridge building that allows for civil communication.

“This is just another way of the businessman Donald Trump, now president, to sell to his consumer base,” he said. “His consumer base wants militarization and their hardcore law enforcement… It’s unfortunate because he should recognize he’s not a businessman, he’s the president for all Americans— not just his base.”

Dawud Walid, executive director of the Michigan chapter of the Council on American-Islamic Relations (CAIR-MI), told The AANews that the nation has been traveling down a dangerous road due to police militarization.

“We saw what happened in Ferguson a few years back,” he said. “The police department not only used military tactics, but military equipment… So the executive order is doing nothing but furthering the police departments around the country and will embolden them to do more aggressive tactics to civilians.”

Walid said Trump pardoning Arpaio shows his support for heavy-handed policing, which has always been used against people of color.

He said there’s no doubt that the “deployment of military styled tactics” against citizens stems from racial biases.

“Police brutality has always gone on in America prior to further militarization of police departments,” he said. “[But] in times of civil unrest, it will lead to more heavy-handed and brutal forms of policing and crowd control by city police departments.”

Ayad also said police brutality has been a reality for decades, but it’s clearer now because it’s much easier to expose incidents with cell phones

Walid said empirical data shows that there is no greater threat to police, but rather a regular trend of police brutality across the country.

“Military war action is totally different than police keeping peace in a community,” he said.

However, he said Dearborn has nothing to worry about because there is mutual trust between the community and the police department.

“We recognize each one as a community partner in our public safety mission,” he said. “Our community engagement efforts have been essential for building trust within the neighborhoods we serve and that enhances the relationship we enjoy here in Dearborn.”

Haddad said that at times, the police may have to be armed to take down violence that threatens the community’s safety, but that depends on a judicious and apt decision.

“The reality is that police must be equipped to mitigate and suppress serious acts of violence that pose threat to public safety,” he said. “While much of our technology is developed by and for the military, how and when they are deployed must be reasonable and appropriate. Having said that, citizens should not be comforted with military grade weapons or equipment during normal patrol deployment situations.”