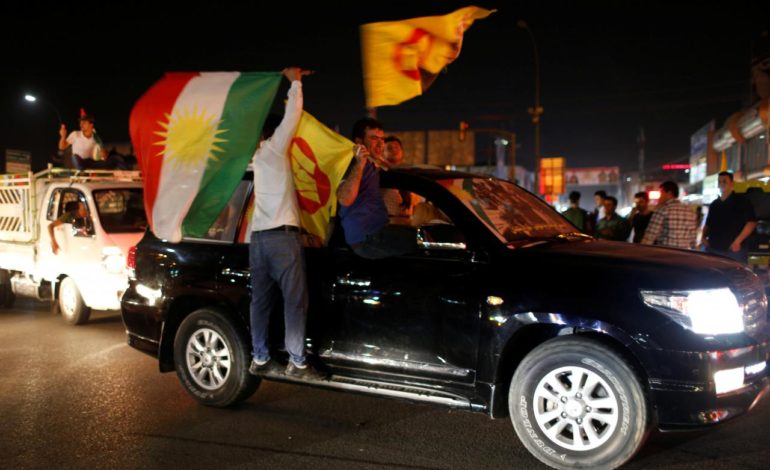 Kurds celebrate to show their support for the independence referendum in Erbil, Iraq September 25. REUTERS

Stepping up efforts to isolate autonomous Kurdish-held northern Iraq, whose people endorsed secession in a referendum on Monday that angered neighboring countries, Baghdad demanded that foreign governments close their diplomatic missions in the Kurdish capital Erbil.

Final results released on Wednesday showed nearly 93 percent in favor of independence, and 7.3 percent against. More than 3.3 million people, or 72 percent of eligible voters, took part in Monday’s ballot, according to the electoral commission.

The referendum has stirred fears of a new regional conflict. An Iraqi armed forces delegation headed to neighboring Iran to coordinate military efforts, apparently as part of retaliatory measures taken by the government in Baghdad following the vote.

Iran and Turkey also oppose any move toward Kurdish secession and their armies have started joint exercises near their borders with Iraqi Kurdistan in recent days. Iraq and Turkey have also held joint military drills.

Kurdish authorities rejected Baghdad’s demands that they should annul the referendum as a condition for dialogue and hand over control of their international airports.

On Wednesday evening, Kurdish Rudaw TV reported that the Kurdistan Regional Government had offered to hold talks with Baghdad about hosting Iraqi observers at Erbil and Sulaimaniya airports to help defuse the crisis.

Turkey, which has threatened to impose sanctions on the Kurds, said its border with northern Iraq remained open, although it may not remain so. The number of trucks passing through had however decreased.