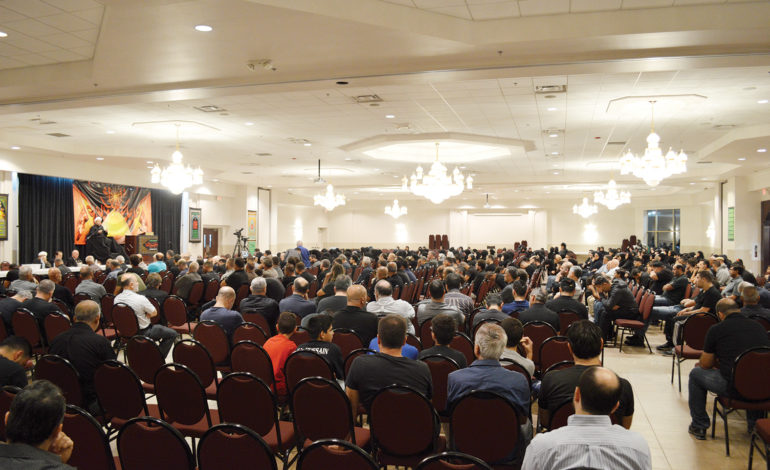 Community members commemorating Ashura at the ICA- Photo by The AANews

DEARBORN— When comparing the Ashura programs offered at local mosques to those found in the Middle East or any Muslim countries, for that matter, there’s evidently a lot of time and effort put into them with hopes of keeping the message of Ahlulbayt’s (the Prophet Mohammad’s family) sacrifice for humanity alive and teaching it to first-generation American Muslims.

According to several interviews The AANews conducted, that determination is visible through an unwavering spirituality and generosity these mosque workers, volunteers and attendees radiate annually in their actions.

Walking into the Islamic Center of America (ICA), the Islamic Institute of Knowledge (IIK), the Islamic Institute of America (IIA) and many other Muslim centers around the area on one of these 10 days, one is bound to notice a high attendance rate, the dominantly black attire, Arabic green, black and red signs and banners hanging in remembrance of Imam Hussein, the Prophet Mohammad’s grandson, and his family. There are also donation boxes, the delectable smell of baked goods either being served or in the kitchen ovens, the elegiac voices chiming through the microphone and the quiet cries of worshipers.

One is bound to sense community empathy that transcends race, gender, age and class.

Still, every year, misconceptions arise on social media and through word of mouth. To help clear up these misunderstandings, as well as some irrational feelings, The AANews spoke to mosque officials, volunteers and community members who shared their experience and the traditions they practice every year.

The Ashura experience in Michigan

Outside the Islamic Center of America, Mohamad Hachicho, 18, told The AANews he’s been attending Ashura lectures and readings since he was a child, but always comes out with a new lesson learned from Hussein’s sacrifice that he can apply to any obstacles he faces.

Hachicho lived between Lebanon and Michigan most of his life, so he noted that there’s a similarity in the programs offered that’s commendable.

Fadel, 18, who also lived in the Middle East for a few years, agreed. However, he said the mosques here offer a different taste because they provide a range of lectures and readings in both Arabic and English.

“Every year now, we’ve come together as a community to commemorate these holy days,” he said, adding that he admires the adamant spirituality the community is not afraid to show.

He said he believes the imam’s message is for everyone.

“People should always remember when Imam Hussein said, ‘Death with dignity is better than a life of humiliation,’” he said. “It just shows how he was willing to sacrifice everything for the sake of Islam, justice and what he believed in… and that’s what we should be doing every single day of our lives.”

After the reading, both young men join in “latmiyat”, a ritual that involves men swinging their arms and thumping their chests at regular intervals to express mourning during a “latmiya”, a religious chant lamenting the adversities the imam and his family endured. Many misconceive it as a form of self-harm, but Sheikh Ibrahim Yassine of the Islamic Center of America said it’s not harmful, but rather a normal expression of grief. He compared it to when relatives die suddenly or when a tragedy happens.

Fadel said it solidifies their emotional connection to the tragedy of Ashura as a sign of grief and has nothing to do with self-harm.

An 8-year-old girl named Diana, who came with her parents, also shared what Imam Hussein taught her and the traditions she practices with her family during Ashura.

“I learned from Imam Hussein to be respectful and be kind to other people,” she said. “[My family and I] donate together and make hareesa on the [10th day of Muharram] and give it out to people.”

Hareesa or harees is a traditional Arab porridge of boiled, cracked or coarsely-ground wheat, mixed with either meat or chicken. It takes hours to prepare and is usually cooked in huge pots to pass out to as many people as possible for the love of Imam Hussein, especially at mosques on the 10th day.

Zeina Saad also said she learned to always believe in herself and to never doubt herself.

She said those who don’t know why Muslims commemorate Ashura or who misinterpret it should not be afraid to ask and learn Imam Hussein’s story because his message is for everyone standing against injustice.

Every other day the Ladies of the ICA, the women board at the mosque, bake traditional Ka’ak (cookie), Middle Eastern breakfast bread and cheese and zaatar pies during Ashura to honor the souls of the Ahlulbayt.

“We support the Islamic Center through social functions and financial support,” Ladies of the ICA Chairwoman Diane Hazime said. “And the way we do that is through [baking]. During Ashura, [baked goods] are in very high demand. We try and make as much as we can… we use 250 to 300 pounds of flour every time.”

She said the profits mainly go to the mosque and then the rest is for the hareesa served on Sunday.

“We stay up all night on Saturday cooking the hareesa,” she said. “We have to buy 300 pounds of meat and 350 pounds of chicken and 144 pounds of butter.”

She added that they would have 12 huge pots on stoves and each one requires 12 pounds of butter.

Hazime noted that they are running a food drive in the name of Hussain in coordination with The Ashura Project to feed the less fortunate. In addition, a table can be found inside the mosque for donations for orphans through the Sadr Foundation.

“Ashura is very large here and our mission is to teach people why,” she said. “He sacrificed himself so Islam can go on… The way Ahlulbayt lived and stood for justice is what Ashura is about and this is what we want to show the world.”

Sanaa Hammoud, a longtime volunteer at the mosque, said she counts the days for Ashura to come and that she believes the imam moves hearts. She sees it firsthand, as she is responsible for the baked goods people donate to be passed around for the love of Hussein.

“This community is very, very generous,” she said. “They give left and right.”

Ali Homayed, a manager at the IIK, also shared the annual tradition of baking Ka’ak and bread daily until the 10th day, when they also pass out hareesa to those in attendance.

“All of them are volunteers,” he said. “We would have around 70 to 80 people to stir the hareesa the night before the 10th.”

As for the IIA, the new mosque in Dearborn Heights, Zeinab Charara, an assistant to Sayed Hassan Qazwini, said that since the kitchen is still under construction, hareesa will be cooked at another location. However, it will still be served at the mosque on the 10th day.

“We serve sweets on a daily basis,” she said “…People bring in sweets or they pay and we bring it in.”

Look for The AANews’ article about the Ashura procession in next week’s edition.