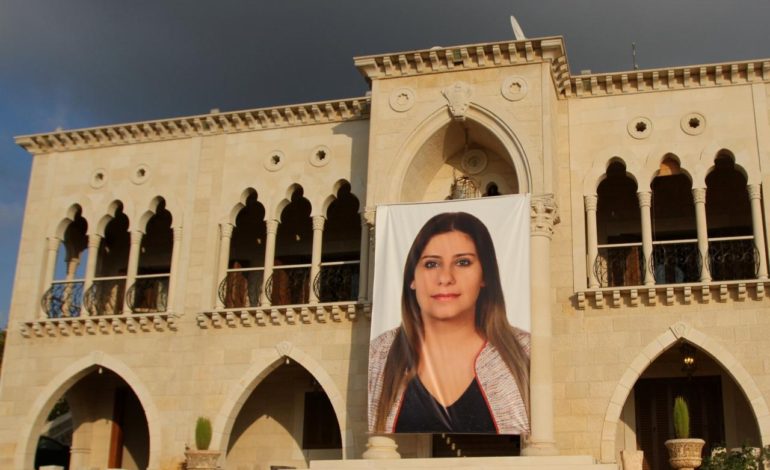 A picture of Rayya Chidiac hangs on her family's home in the village of Miziara, northern Lebanon, September 29/REUTERS

MIZIARA, Lebanon ― Abu Khaled had lived in the Lebanese town of Miziara for almost 20 years until a woman’s suspected murder by a Syrian refugee led to his expulsion alongside several hundred other Syrians.

“They gave us notice to evict at 2 a.m.,” said Abu Khaled, standing outside a bare building in a nearby village with some of his 13-strong family, who were all forced to leave on the orders of the local authorities.

“I don’t know how we left – we carried our stuff on the road and then found this warehouse and we put ourselves here,” he told Reuters.

More than six years into the Syrian war, 1.5 million Syrians account for one quarter of Lebanon’s population. But patience is wearing thin with their presence and the strain it has placed on local resources.

At the local level, ill feeling has surfaced intermittently in recent years, with councils imposing curfews, telling Lebanese not to rent houses to Syrians, or outright asking them to leave an area.

The decision was prompted by last week’s arrest of a Syrian man for the murder of 26-year-old Rayya Chidiac in Miziara, a wealthy Christian town in north Lebanon.

Chidiac had been found dead in a relative’s home on Sept. 22 showing signs of bruising, strangling and sexual assault, security forces said.

The refugee, in his 20s, had worked as the building’s caretaker, and confessed to her murder.

“They are devouring us”

While the crime shocked Syrians and Lebanese alike, the locals said they must protect their own and could no longer risk living alongside Syrians.

“We are giving them food and they are devouring us. We cannot welcome them here any more,” priest Yousef Faddoul told Reuters. “Let them set up tents for them elsewhere.”

But the Syrians say they are being punished collectively for one man’s crime. “If I don’t go back to my work, what can I do? In my country there is a war … two days ago, a rocket exploded near my house,” said Sobhi Razzouk, a Syrian from Idlib who had worked in Miziara for 15 years before being expelled.

Like Abu Khaled, he was had joined in Lebanon by his family after the war began.

“We condemn this horrific act … but the way we were expelled – we never expected this.”

In response to questions from Reuters, the United Nations’ refugee agency UNHCR called for “restraint from collective reprisals against refugees”, and said it was in touch with local authorities and refugee families.

Miziara’s municipal authority said on its Facebook page that Syrians could now only be in town during daytime working hours – if they had work permits. Landlords can only rent accommodation to those with residency permits.

Another post from the municipality encouraged Miziara landlords and those who sponsor Syrians to evict them or annul their guarantees.

“We support evicting Syrians in a legal way and evicting all those who break the law and anyone who has no business being in Miziara,” said Maroun Dina, the head of the municipal council, said.

“This is a problem across Lebanon. If the government doesn’t take the necessary steps then the public will and I cannot control the public,” Dina said.

Many Syrians in Lebanon live in a precarious legal situation, with proper residency and work documentation expensive and hard to obtain.

Lebanon has resisted the establishment of organized refugee camps for Syrians, fearing a repeat of its experience with around half a million Palestinians, most still living in refugee camps set up after the creation of Israel almost 70 years ago.

That has left Syrians scattered across the country in tented settlements or urban areas – without any clear definition of their rights, and at the mercy of local authorities.

Their long-term presence is a particularly sensitive issue for Lebanon, where the addition of so many predominantly Sunni Muslim Syrians would upset the delicate sectarian balance with Christians, Shi‘ite Muslims and other groups.

As the Syrian government regains control of more Syrian territory, calls have increased in Lebanon for Syrians to return home, although Prime Minister Saad al-Hariri has said there can be no forced return.

Last week, the north Lebanese town of Bsharri cited Chidiac’s death as a reason to clamp down on Syrians, saying the situation in Syria had improved to the point where they no longer needed to be in Lebanon.

It issued a statement saying Syrians must not gather in public squares, must not go out after 6 p.m., and would be barred from renting properties in the area from Nov. 15.