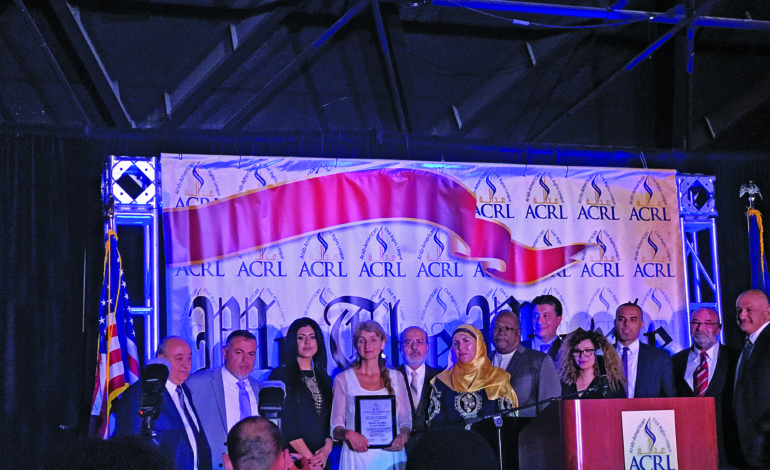 ACRL awards Asha Deliverance, mother of one of the Portland heroes who died defending two young women/ Photo by The AANews

DEARBORN — At its sixth annual Fight for Justice Gala, the Arab-American Civil Rights League (ACRL) honored Asha Deliverance, mother of Taliesin Myrddin Namkai-Meche, one of the Portland heroes who died defending two young women after he came to their rescue in a racist incident in Portland this past spring.

The event took place October 5 at the Ford Community and Performing Arts Center. The ACRL is a well-known social justice organization that hosts the Fight for Justice event to address major civil rights issues in the community and acknowledge worthy acts of people who serve the social justice cause.

On May 28 in Portland, a 35-year-old convicted felon, who was spewing ethnic and religious slurs at two teenage girls — one Muslim and one African American — fatally stabbed Taliesin Myrddin Namkai-Meche, 23, and Ricky John Best, 53, when they attempted to protect the young women. The event started by showcasing the work done by the ACRL for the community in terms of social justice issues that minorities in America face every day, such as President Trump’s Muslim ban, the no-fly-list and the watchlist that includes members of the Arab American community.

Prior to her speech, Deliverance gave an emotional video presentation of her son’s life and was presented with an award to honor him as a hero.

In her speech, she spoke with positivity and grace about her son’s death and left the audience in tears.

“My son, he did not die in vain and he communicates with me quite a bit on the other side,” she said. “He studied comparative religions and he understood that all religions are from the same source. I believe that this incident was divinely orchestrated; my son laid down his life for a Muslim girl and an African American girl.”

Deliverance said she believes her son’s purpose in life was the point when he gave it up to send a strong message about love and standing up for unity.

“I can be nothing but proud and all the more fulfilled as a mother,” she said. “I believe that there is something greater to be told here, of a story about when you stand up for love; that even if it’s fatal, there is a beauty after this and that beauty world welcomes you. And I promise you there will be one loving boy with a big hug for you there.”

She received a standing ovation.

Obeidallah, who spoke before Deliverance, is an activist for the Arab community through his filmography work and his insight on politics that he presents at news organizations. He also raises political awareness through his work.

He discussed the importance of utilizing the media to better the image of the community through the involvement of Arabs and minorities in different segments of society.

He also talked about the importance of communities making allies with other communities and political involvement from the Arab community, all to bring forth an improved image through the media.

He was humorous in his approach and made the audience laugh through snarky comments that hinted at the current state of inequality and social justice in the country.

“When President Trump and immigration officials came to Detroit asking the sheriff to detain people unlawfully, our sheriff, said ‘Not on my watch,'” she said. “And that’s the kind of leadership we need in our country more than ever.”

Napoleon was given an award in recognition of his efforts as a political leader in Wayne County.

He then gave a short speech about the importance of activism and the community coming together in times of crisis where division based on race has become an issue in the community.

“We ask that in honor of this tragedy, we use this as an opportunity for reflection and change,” an ACRL member said during the presentation about Namkai-Meche.