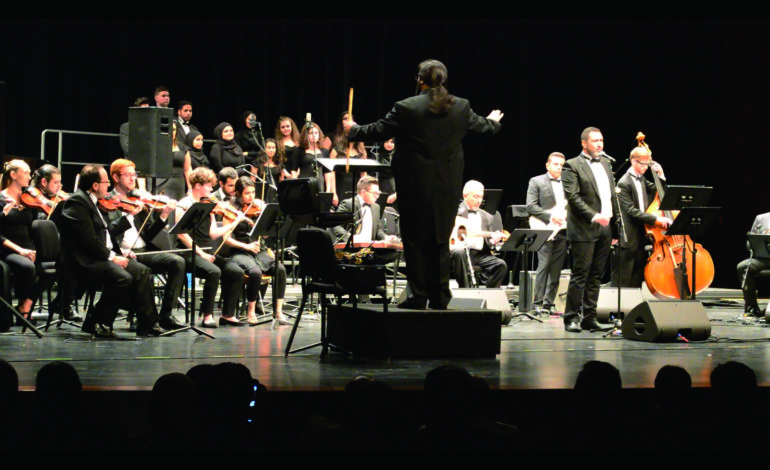 DEARBORN — It was a night reminiscent of an era most Arab Americans are uncannily familiar with, but had never experienced themselves.

On October 1, concert goers traveled back in time to hear traditional Arabic musical classics presented by the National Arab Orchestra (NAO). It was its eighth season of “A Night of Tarab” at the Ford Community and Performing Arts Center, where masterpieces of icons like Abdel Halim Hafez and Fayrouz came to life.

The term “tarab” is used in Arab culture to describe the emotional effect of music, but it is also associated with a traditional form of art-music.

Michael Ibrahim, a theatrical and colorful conductor and the NAO’s founder, made its purpose clear while entertaining concert-goers — as anti-Arab rhetoric goes rampant, few things promote understanding and unity like music does.

As if being engrossed in the music isn’t enough, Ibrahim told The AANews that as the NAO tours the country, he most enjoys changing the hearts and minds of people while offering an unbiased perspective about the culture.

“It’s one of the only art forms that could really bring people together and change the narrative,” he said.

Founded in 2009, the NAO was originally a small chamber music group comprised of the ‘oud (Arab lute), qanun (Arab zither), violin, nay (Arab reed flute) and riqq (Arab tambourine). Since then, the ensemble has grown to become an orchestra comprised of musicians of both Arab and non-Arab backgrounds. They are students or professional musicians in the community.

The NAO has most recently focused on youth music education, in partnership with local schools. Its efforts were showcased on Oct. 1, with a surprise performance from the Dearborn Fordson High School Choir.

Backstage, where excited performers prepared their instruments, violinist Laith Sidiq told The AANews he immigrated to the U.S. eight years ago and is proud to be part of an orchestra, “that brings together Arab musicians and non-Arab musicians to a national orchestra that performs music from all kinds of artists, from older golden era music to modern and contemporary styles.”

He added that the musicians learned the music over two days before presenting the show.

“It’s so important to bring this culture here,” he said. “To show the artistic side of our culture and how we can change the perspective of people through this.”

The NAO’s next performance will take place on Nov. 17 at 8 p.m. at the Detroit Institute of Arts, where an ensemble will be paired live with screenings of rarely-seen silent films from the 1920s and 1930s by pioneering Egyptian director Mohammed Bayoumi. The free event will include a discussion by Egyptian historian and film scholar Mohannad Ghawanmeh.