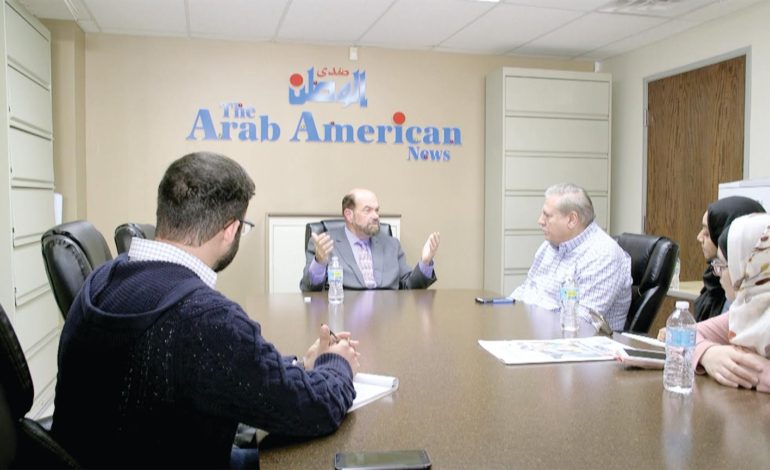 DEARBORN — There is a lot on the line in the city — from major investments and revitalization projects, to alleviating high property taxes and diversifying the workforce. As they battle in a heated race, the two mayoral candidates say that on Nov. 7, Dearbornites will have a chance for the first time since 2001 to stick with already articulated plans to address the issues by re-electing Mayor Jack O’Reilly or to change the government’s direction by voting for long-time City Councilman Tom Tafelski.

In separate interviews, both O’Reilly and Tafelski shared with The AANews their plans for the city if elected.

At the offices of The AANews on Wednesday, Oct. 18, Mayor O’Reilly asserted that the gears to implement fixes are already spinning, but take time to come to fruition.

He’s been mayor since 2007, following Mayor Michael Guido death from cancer in 2006, and won his second term in 2013. O’Reilly had previously been City Council president for 17 years, and his father, John Sr., was mayor of Dearborn from 1978 to 1985.

O’Reilly, the father of three, said his focus is to maintain relationships with large investors in the city while making it more attractive for small businesses to set up shop and young families to live in Dearborn.

He said he hopes to ride the tides from Detroit’s revitalization.

“Housing in midtown and Downtown [Detroit] is so costly that we could on our eastern end begin to attract young people who are looking for affordable housing,” he said. “They work down there or go to school and want to be close to campus. Dearborn offers the greatest opportunity.”

Without homes that are affordable, attractive and spacious enough for young families to live in, residents will either settle or move out, and cities will fail, O’Reilly added.

It all started with a new and aspiring community who built an industrious city from farmland. Since newly-minted Americans lined Warren Ave. with small shops that made Dearborn unique, the city has relied on strengthening its business corridors for economic prosperity.

Many business owners lost their establishments during the 2008 recession. O’Reilly said he wants to bring them back.

“Things happen way before people see them happen,” he said, adding that Dearborn has a number of interested investors.

“They’re local people and they’re going to commit a lot of money,” he said. “We’re already meeting with them, we’ve done some preliminaries. There’s going to be just a dynamic project there.”

Another endeavor on Warren Ave. and other business corridors like Dix-Vernor, is creating “an image of the Middle East” that can draw people like “Greektown used to,” the mayor said.

Dearborn’s largest revenue source and employer, Ford Motor Co., plans to transform its world headquarters to the tune of $1.3 billion and build a second campus with $60 million — all in the city’s west end.

As O’Reilly seeks to draw in small business investment in the east end, some residents have asked why Ford has made no commitments on that side of town. After all, the mayor said he played a key role in making it happen in the west.

O’Reilly said Ford has always redeveloped property it already owns since it acquired it in the 1920s, and that all of it is on the west side.

The auto company also bought three blocks of land and buildings between Mason and Oakwood Blvd. in west Dearborn that it plans to develop into office, living and retail space.

O’Reilly said Ford “wanted to create an environment that would attract young talent.

“That was a conscious effort,” he said. “Not because they needed that space, but because it would represent the new spirit, the new image of Ford Motor Company.”

O’Reilly added that he helped pave the way for the project by convincing the former owner of a key parcel to sell the property. He also convinced the Michigan Economic Development Corporation (MEDC) to contribute an additional $1.5 million to the project. He sits on the MEDC board.

He added that the city also devoted minor infrastructure capital.

The sale of a piece of property in the same area about two years ago recently put O’Reilly in a media crossfire. A deal that would contribute to energizing the business district ended in regrets for the mayor.

Six months after the City Council gave approval for Hassan Saab, a friend of O’Reilly’s son, to build a Noodles & Co. restaurant on the corner of Michigan Avenue and Howard Street, Saab sold a 2008 Ford Escape to the mayor for $200 less than the $2,200 Saab bought it for nine days earlier.

Residents questioned whether this was a backroom deal. Some alleged a conflict of interest, asking if Saab got the green light on the development because of his relationship with the mayor.

O’Reilly told The AANews his sole involvement with the property was to approve a panel that would confirm the sale of the lot from the city to Homesite Investments, Saab’s employer.

“I have the right to modify the committee,” he said. “I actually signed off without any recommendations. And then it went to Council and got approved. I had nothing to do with it.”

O’Reilly added that the city had received only two bidders who wanted to buy the lot: One who didn’t submit a required deposit and Homesite, which did. That developer failed to deliver on the project and the ownership of the land is now in litigation.

He compared Dearborn’s challenge to sell with property a state department tried to sell, which caught the interest of only one bidder, who also failed to submit a deposit.

The mayor said he wishes he had thought about that land sale before taking up Saad’s offer to find his son a new car to drive to college.

Originating with a Detroit Free Press story, the city’s deal gone wrong garnered negative press attention, but O’Reilly said his opponent is the only one to blame for “drawing them into the mud.”

“My position is I’d rather just send my messages directly to the voters in Dearborn,” he said of the negative campaign coverage. “I think it’s unfortunate to go out and keep putting Dearborn out in the media in ways that is not necessarily long-term going to help our community.”

Arab Americans have become significantly more civically engaged in the past decade. Yet, a list of employees obtained by The AANews shows that in Dearborn, where Arab Americans make up about half the population, only 8 percent of them work full-time for the city.

O’Reilly told The AANews the city has tried to encourage Arab American youth to apply for government positions, but that “people have to have the skill sets that are required.”

He added that a program is in place to inspire high school students to work their way up in the police and fire departments. Students who join the force are given a financial aid stipend to pay for two years of college.

That initiative has been successful in increasing the number and diversity within the police department, but there is resistance to change in the fire department, O’Reilly said.

“There is no resistance from my part or my administration to not try and get people from the community,” he said, adding that state law does not require local government employees to live in that city.

Of the 190 officers, 16 of them — 8 percent — are Arab Americans, according to Nancy Hamood Strutz, assistant to Dearborn Police Chief Ron Haddad. Haddad is an Arab American.

Seven Arab Americans work at the Fire Department, which is 5 percent of the total 142 personnel.

O’Reilly, 68, recently had a sharp weight loss that has residents worried about his health and whether he’d be able to complete another term if re-elected. The mayor, who has been a public servant for about 25 years, told The AANews that doctors urged him to lose weight before undergoing knee replacement surgery last summer.

“I’ve been the same weight for over a year,” he said, adding that he’s not on medication and he recently ran a 5K marathon held by Beaumont Hospital to prove he wasn’t sick. “I haven’t lost weight in the last year, and it’s just been steady. I’m much healthier because now I exercise regularly.”

O’Reilly, who holds a juris doctor degree from the University of Detroit, told The AANews during the primary election he is a qualified candidate for the position because of his “educational background, my working history inside and outside of government, my widespread network of key leaders, my accomplishments in this office and my high ethical standards.

“For Dearborn residents, this means that I bring not only a vision but the capacity to make that vision a reality. It means I can lead people through good times and through bad times, marshaling our resources to meet and exceed expectations. It also means that I will continue to put their interests first regardless of the difficulty or consequences.”