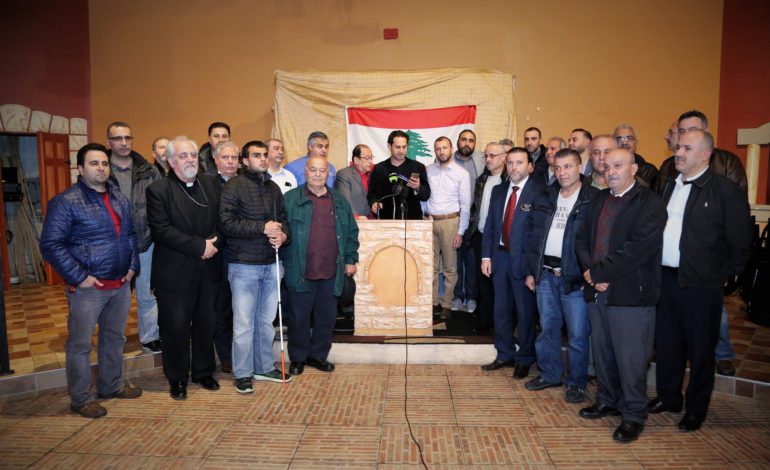 DEARBORN — They might be thousands of miles away, but news of Lebanese Prime Minister Saad Al-Hariri’s resignation – and the prospect that Saudi Arabia has something to do with it – has Lebanese expatriates on edge.

Dozens of Lebanese Americans in Metro Detroit joined a protest at the Lebanese American Heritage Club in Dearborn on Monday. They denounced Saudi Arabia’s blatant interference in Lebanese government affairs and declared it a threat to the country’s security and stability.

The concerns come after Hariri read his resignation, which was broadcast from Riyadh, sparking deep divisions in Lebanon’s social and political spheres.

A statement read by The AANews journalist Ali Mansour, on behalf of attendees, condemned the “barbaric way” in which the kingdom dealt with Lebanese Prime Minister Saad Hariri and blamed the Saudi government for “exposing Lebanon to any external aggression.”

The statement began by stressing that the Lebanese expatriates consider the “civil peace and internal stability, in both security and economic aspects, red lines that are not allowed to be crossed by any internal or external parties.”

Mansour charged the kingdom with fabricating the governmental crisis by pressuring the prime minister, “forcing him to resign from Riyadh in violation of the Lebanese Constitution.”

He added that Hariri’s television interview explaining his resignation did not change Lebanese’ views that Saudi Arabia dealt with the prime minister in a barbaric manner and “will not change the image of blatant aggression against the sovereignty and independence of Lebanon and the dignity of its people.”

Echoing this sentiment, local activist Zuhair Alawiya said Hariri’s interview “will not deceive anyone” and to assume otherwise is an infringement on Lebanese’ dignity.

They considered their demonstration a call of support to continue on President Aoun’s diplomatic campaign to restore order in the country.

The statement called on all Lebanese around the world, especially in the United States and Australia, to “mobilize peacefully, in accordance with their county’s laws, to voice their rejection of Saudi interference in Lebanon’s security.”

The AANews Publisher Osama Siblani also condemned the Saudi goverment, which he said does not miss an opportunity in creating the problems that destabilize security and peace in the Arab World and the region.

“We understand the Kingdom’s concern of the fall of a ballistic missile on one of its airports…We do not accept the bombing of any airport in the world,” Siblani said. “But what about the 87,000 air strikes launched by the Saudis on Yemen that killed thousands of people and destroyed that country’s infrastructure?”

Citing a Reuters report, Siblani added that Saudi Arabia is planning to impose an economic blockade on Lebanon, as it did with Qatar.

We condemn the barbaric way in which the kingdom dealt with Lebanese Prime Minister Saad Hariri and blame it for exposing Lebanon to any possible external aggression.

Qatar has a population of 300,000 and is the largest gas exporter in the world, but Lebanon has no gas or oil, he added.

“Lebanon has men who are capable of repelling any threat,” he said. “The Saudis should know that there are people who do not accept humiliation, whatever the price.”

He also condemned attempts to polarize the Arab world through a sectarian lens and some here who are trying to drag the divisions into the Arab American communities here, especially during the last municipal election. Such a divisive action should be condemned by all of us.

“Today, we stand with Hariri not because he is Sunni or a Muslim, but because he is oppressed and he is the prime minister of Lebanon,” Siblani said. “In the same breath, we do not stand by [Hezbollah leader] Sayyed Hassan Nasrallah or the Lebanese resistance because they are Shi’a, but because they liberated our mother county’s land, brought dignity to the Lebanese people and defeated occupation, represented by Israel.”