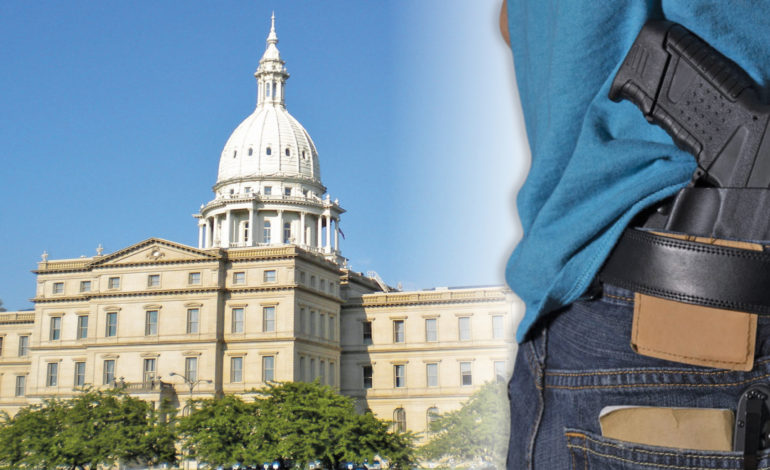 DEARBORN — Amid a recent spike in threats against places of worship, officials and mosques in Metro Detroit are tightening security and bashing a new gun legislation that passed in the Michigan Senate last week.

It was tense at the Michigan Capitol on Wednesday, Nov. 8, when the Senate passed in a 25-12 vote a bill allowing the concealed carry of handguns in places where they haven’t been before, like schools, mosques, churches, day care centers and stadiums.

Republican proponents pointed to a shooting that took place at a Texas church a week before the bill passed, leaving 26 people dead and more than 20 injured.

But Democrat lawmakers and mosque leaders in Metro Detroit are calling the bill “reactionary”, especially after a Dearborn Heights resident found a bag in his backyard that included a pistol and a map with addresses of a mosque and two churches circled and the word “target” on it.

On Tuesday night,  worshippers at the Masjid Bilal in Canton were greeted with flashing red and blue lights that lit up the modest mosque, while the Westminster Presbyterian Church in Grand Rapids closed its doors. A Dearborn mosque was also among the targets.

Dearborn Heights Police said in a statement that the department and the FBI are jointly investigating the threats seriously, but have not verified them as credible and have no information about any suspects yet.

Last Sunday, a 34-year-old Yemeni American was fatally shot twice in the chest while he sat in his car at an Arabic market in Detroit, near the Dearborn border.

Newly released data from the FBI ranks Detroit as the most dangerous big city in the country, with the number of violent crimes increased by 15.7 percent between 2015 and 2016, from 11,346 to 13,705. Violent crimes included murders, rapes, assaults and robberies.

Imam Elahi, religious leader of The Islamic House of Wisdom in Dearborn Heights, said the bill’s passing was “reactionary” and born from an insincere conversation about gun regulation and security, given the rise in mass shootings and Islamophobic hate crimes.

This month, the mosque received two separate insulting letters in the mail – one that included a return address – but the authors were careful not to cross into threatening territory.

“Anytime we have service, there’s a sense of concern,” he said. “If it happened at a church in Texas, it can happen anywhere.”

The imam said the costs to properly secure houses of worship can run high and called on local police departments to step up collaboration with them and the Muslim American community during dangerous times.

“It is the general responsibility of law enforcement is to be very watchful of every development and take security very seriously,” he added.

Regardless, he urged residents to always be vigilant and act as “soldiers of security.”

State Senator Morris Hood (D-Detroit), who sits on the government operations committee and voted against the legislation when it reached the full Senate, told The AANews houses of worship should “most definitely be concerned.”

He said religious buildings and schools were made gun-free zones because they are expected to be safe havens for worshippers and valuable youth.

Hood said the bill passed and goes to the Michigan House, although a majority of the audience in the chambers opposed it, and that the committee reviewed dozens of letters from constituents — only one was in support. An “overwhelming” number urged the lawmakers to stand against the legislation.

He added that Democratic senators followed with introducing amendments to improve the bills’ language, like allowing school districts determine what’s more suitable for their schools, but they were denied.

“Our voices were fallen on deaf ears,” Hood said.

While Hood said he doesn’t doubt his Republican colleagues voted with strengthening security in mind, he said the job is best left in the hands of trained professionals.

He pointed to the extensive weapons and de-escalation training and annual re-certification that police officers and other first responders receive, compared to the 16 total hours required to obtain the license to carry a concealed pistol in a mosque or school, per the bill.

Hood added that proponents failed to address the confusion created when first responders arrive at an active shooting scene and are unable to differentiate between the perpetrator and worshippers defending themselves.

They also neglected the impact guns in schools could have on students’ learning environment, especially for those who may have been victims of gun violence.

Allowing gun carriers with the special license to enter a bar, where alcohol is primarily served and is known to effect judgment, is a mistake, he added.

“More guns is not the answer,” Hood said.

He said he hopes Gov. Snyder will veto the bill, as he did with a similar one in 2012, and keep guns in the right hands.

“We rely on police to respond to any hostile situation,” Hood said. “We fight every day to get more money for police and fire so they can do their jobs better.”